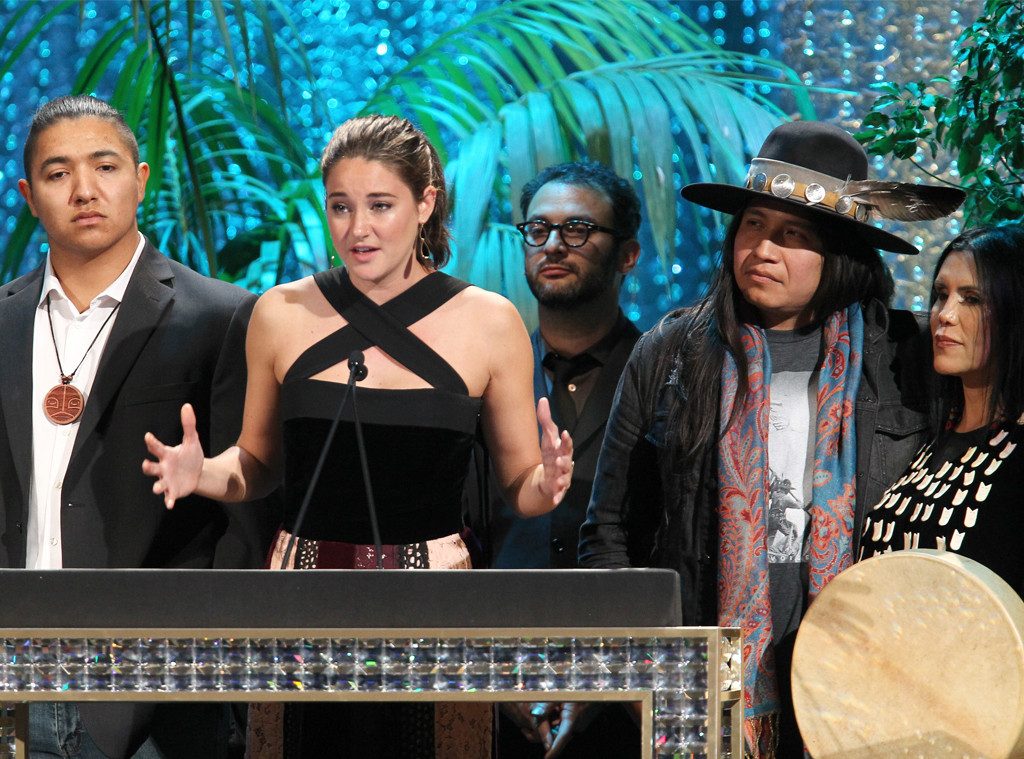 (EnviroNews World News) — Hollywood, California — Shailene Woodley, actress and star of the Divergent Series, and Jaden Smith, actor and son of Will Smith and Jada Pinkett, were both honored with the Futures Award at the Environmental Media Association’s 26th annual EMA Awards in Hollywood, California.

The green, not red, carpet event, was hosted Saturday, October 22, 2016, by Nicole Richie, and was attended by multiple top-tier celebrities.

Woodley, who was arrested and charged with “criminal trespass” and “engaging in a riot” earlier this month for protesting the Dakota Access Pipeline Project (DAPL) in North Dakota, took to the stage in acceptance with some inspiring words for her followers and fans.

“I want to make sure that my grand-babies don’t have to buy a bottle of water for twenty dollars because clean water is impossible to find,” the 24-year-old actress said.

“What is really important is standing up and making our voices so loud that they have no choice but to ignore us. The time is now. We don’t have any more time. We cannot let this oppression continue. Not only to the indigenous communities of our world, but of the future children,” Woodley continued.

Speaking of “indigenous communities,” Woodley wrote a scathing essay published in TIME MAGAZINE only one day before the EMA Awards show titled, The Truth About My Arrest.

Woodley stood up for her fellow DAPL protestors of Native American decent, who prefer to be called “protectors,” with these words in her essay:

I was in North Dakota, standing side by side with Native Americans.

You know, those who were here before us.

And they are still fighting the good fight. A fight that serves each and every one of us.

They are still putting their lives on the line to protect the roots that feed our existence.

And, guess what else, dear America? They are still being ignored.

We are still throwing them in jail.

We are still silencing their dedication to protect us from the planetary consequences that will catastrophically bleed from our ignorance.

We wear their heritage, their sacred totems, as decoration and in fashion trends, failing to honor their culture. Headdresses, feathers, arrows. Moccasins, sage, beadwork. You know what I’m talking about, Coachella. Walking around the flea market this weekend, I can’t even tell you how many native references I saw being used in a way that feeds our western narrative.

We buy plastic teepees from Toys-R-Us and set them up in our living rooms for children to play in.

Somehow, we’ve allowed 200-plus years to go by without questioning the western truth we have been told to believe about Native Americans.

The Environmental Media Awards are an event hosted annually for the last quarter century. EMA says on its website, “Since 1991, the EMA Awards has been the only program solely devoted to celebrating the entertainment industry’s environmental efforts. A pioneer in linking the power of celebrity to environmental awareness, it was EMA who invented the ‘green carpet,’ launching the concept of taking a hybrid or alternative fuel vehicle – not a limo – to our annual Awards show.”

Actress Shailene Woodley (Divergent) Writes in TIME: ‘The Truth About My Arrest’ (Over DAPL)

(EnviroNews World News) – Actress and activist Shailene Woodley took to the media waves via TIME Magazine’s “Ideas” section in a personal piece titled, The Truth About My Arrest. The account comes in the wake of Woodley’s October 10 arrest over protesting the Dakota Access Pipeline (DAPL), whereafter…