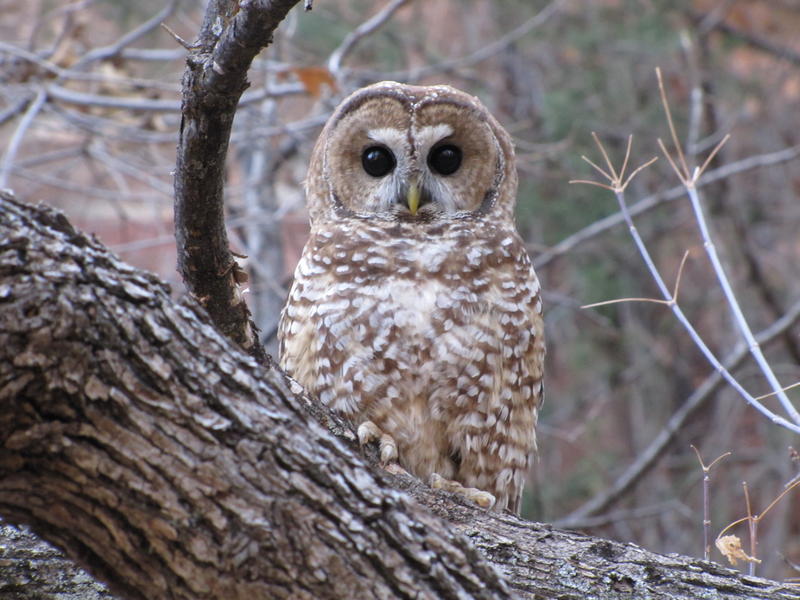 (EnviroNews Nature) — Amidst an unprecedented number of wildlife attacks and habitat rollbacks at the end of the Trump Administration, one critter won a rare victory. After a legal battle with the federal government that spanned the better part of a decade, environmental non-profit WildEarth Guardians (Guardians) announced it had finally reached a deal with the U.S. Forest Service and U.S. Fish and Wildlife Service (USFWS) on Oct. 27, 2020. The truce stems from a 2013 lawsuit, wherein Guardians alleged the two agencies failed to collect basic information that would ensure the Mexican spotted owls’ (Strix occidentalis lucida) recovery in the national forests of the Southwest. The owl is listed as “threatened” by the U.S. and Mexican governments and is one of three subspecies that include the northern spotted owl (Strix occidentalis caurina) and the California spotted owl (Strix occidentalis occidentalis).

Under the agreement, the Forest Service is required to comply with the Endangered Species Act (ESA) and conduct annual spotted owl population surveys through 2025. Other stipulations include conducting research to better understand the effects of thinning and prescribed burning on owl populations, data sharing, and greater collaboration for conservation of the Mexican spotted owl, according to a Forest Service press release.

Guardians plans to hire a staff member whose “primary responsibility would be to track all aspects of this agreement and, more generally, ensure that the management of Southwestern national forests is consistent with the habitat and recovery needs of the Mexican spotted owl,” said John Horning, Executive Director of Guardians, to EnviroNews in an interview.

As part of the compromise, the Forest Service established the Mexican Spotted Owl Leadership Forum, which aims to improve “transparency, communication, and coordination around forest health and wildlife conservation efforts,” according to a Forest Service press release. The two sides agreed to end a September 2019 court injunction against logging in the Lincoln, Santa Fe, Cibola, Carson, Tonto, and Gila National Forests.

“The affected forests are eager to resume work on the ground, demonstrating our commitment to conducting sustainable restoration projects in a way that benefits all,” said Region 3’s Acting Regional Forester Sandy Watts.

On March 16, 1993, the USFWS listed the Mexican spotted owl as “threatened” under the ESA. At the time, the number of owls and their specific habits were relatively unknown because of their nature. However, the agency recognized the majority of the owl population was found in national forests and required a habitat that included mature-growth forests with multi-layered canopies and trees of different ages. It also said that the spotted owls’ habitat was compromised by “historic and contemporary timber management practices, specifically even-aged silviculture,” according to the September 2019 court injunction.

In a press release, Horning wrote about how the benefits of the pact extend beyond protecting Mexican spotted owls:

The Mexican spotted owl isn’t the only member of its family facing trouble. Its more famous cousin, the northern spotted owl, was in the middle of contentious battles between environmentalists and the logging industry in the late ‘80s and early ‘90s. More recently, northern spotted owls have also fallen victim to rat poison used in illegal marijuana farms, according to a UC Davis study, when they consume contaminated rodents. As reported by EnviroNews, the poisons were approved by the EPA with limited data on the consequences of their use.

But it’s not only pot farms using anticoagulant rodenticides that demolish owl and other endangered wildlife populations, it’s conventional agriculture and industry as well. On Sep. 29, 2020, California Governor Gavin Newsom signed AB1788 into law, which limits the use of second-generation anticoagulant rodenticides. Conservationists hailed the move as a victory for California’s wildlife, including mountain lions, bobcats, and owls. These rodenticides were banned for consumer sales in 2014, but use has continued in the commercial sector.

As for WildEarth Guardians’ role in the victory for this spotty feather flier, it certainly isn’t the NGO’s first rodeo. Guardians, alongside the Center for Biological Diversity (the Center), is responsible for more species receiving protection under the Endangered Species Act than any other non-government organization, after the two entities won protection for some 800 species following a decade-long legal battle with the federal government.