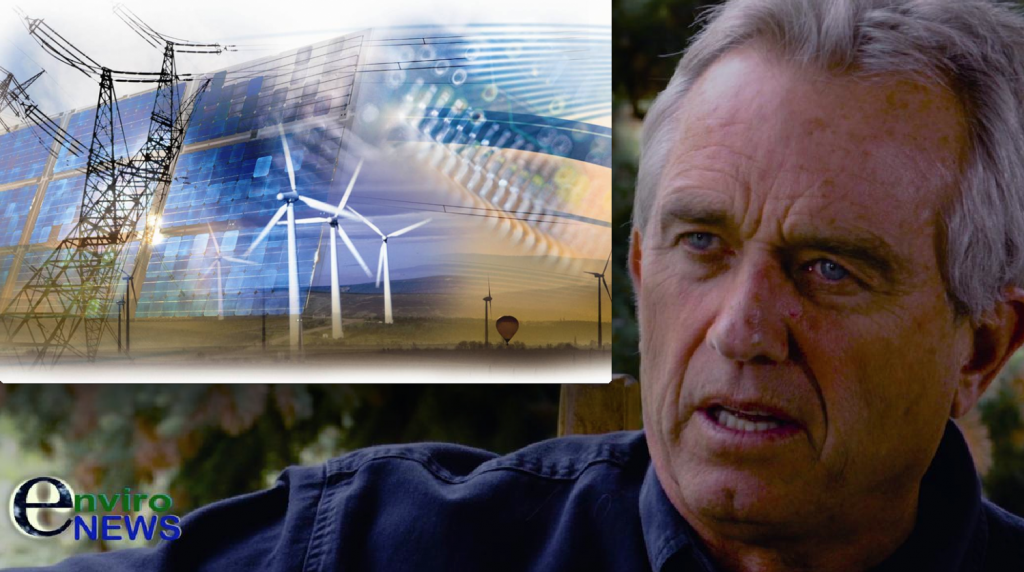 Kennedy is President and Founder of Waterkeeper Alliance (the Alliance) – an expansive outgrowth of the Hudson River Fisherman’s Association (HRFA), formed in 1966. Kennedy was commissioned by Hudson Riverkeeper as an environmental lawyer in the mid-80s, and in the ensuing three decades has spearheaded countless legal actions against corporate polluters and the government, forging a track record of courtroom maneuvers that has cost environmental culprits billions.

Kennedy Jr.’s respect and love for the environment were formed in his early years while fishing and kayaking with his father, Robert F. Kennedy. His years with Waterkeeper Alliance have given him the expertise to see these issues from a lifetime of activism and leadership.

The episodes are all online now and cover a plethora of environmental topics. EnviroNews readers can link to the original stories and watch all nine segments via the video players just below:

How a Movement Was Born — as Recalled by Robert F. Kennedy Jr.

Waterkeeper Alliance was born out of the original Riverkeeper organization founded in 1983, in an effort to address the heavily polluted Hudson River in New York. “There was once a time when the Hudson kept changing color depending on what truck color was most popular at the GM plant in Tarrytown,” Kennedy recalled on EnviroNews. That organization spawned hundreds of others dedicated to protecting, preserving and repairing local rivers, bays and other waterways. The Alliance brings them under one umbrella and now includes more than 320 chapters spanning 30 countries.

RFK Jr.: ‘[Waterkeeper is] filing barrages of suits to stop the dismantling of the Clean Water Act’

Legal action has always been a hallmark of Kennedy’s work with Waterkeeper Alliance, but the Trump Administration’s focus on removing or rewriting environmental regulations has upped the ante for the organization. The Alliance filed its first suit against EPA head Scott Pruitt on February 23, 2017. “President Trump and his EPA administrator Pruitt are trying to limit the reach of the Clean Water Act to eliminate rivers in our country and streams and wetlands,” Kennedy said.

Kennedy revealed that he had accumulated high levels of mercury in his body from eating fish and from dental fillings. “I am a fisherman and I fish freshwater fish, which it turns out are very heavily loaded,” he said. Kennedy has since undergone chelation therapy and had his dental fillings removed. But his experience taught him the dangers of mercury poisoning, and he lamented that it was no longer safe to go fishing and eat the catch.

In this segment, Kennedy pointed out that the U.S. military is one of the nation’s leading polluters and that he’d gone to jail protesting naval operations in 2001 that were damaging the environment of an island in Puerto Rico. But next in line behind the military, Kennedy said, are the massive factory farms known as concentrated animal feeding operations, or CAFOs. “We’re the lead group suing CAFOs across the country,” said Kennedy about the Alliance.

Robert F. Kennedy Jr.: ‘I love James Hansen, but he is wrong on [the nuclear power issue]’

“I’m all for nuke if they can ever make it economic, but it costs 15 times the amount of solar, so why would you ever do it?” Kennedy told EnviroNews. “Plus, it’s unsafe.” Responding to a question from Urry about climate scientist James Hansen’s support for nuclear power as part of a solution to climate change, Kennedy said, “He doesn’t understand the cost advantage that solar and wind now have over the incumbents, including nukes.” Kennedy pointed to the outsized subsidies needed by the nuclear power industry and the exorbitant cost of dealing with nuclear waste.

Continuing on the topic of CAFOs, in this segment, Kennedy said, “[CAFOs] destroy family farms. They destroy farm communities. They poison people. They’re emptying our landscapes. They’re destroying democracy.” He recalled how 28,000 family hog farmers in North Carolina had been replaced by 2,200 factories, with 80 percent of them controlled by just two companies.

With the solar and wind industries adding 362,000 U.S. jobs in 2016, Kennedy believes that economy no longer favors fossil fuels. “The only way they can maintain market dominance is by controlling our political system, because the markets have left them,” Kennedy explained. He sees competition and technology driving down the cost of electric cars, while the oil industry and Trump Administration try to forestall the transition to clean energy by approving new, expensive oil infrastructure.

Robert F. Kennedy Jr.: ‘If you believe in markets, you have to believe the era of coal has ended’

With the current administration promising to resurrect the coal industry, Kennedy responded, “Anything that Trump does is not going to bring back a single coal job, not one.” He pointed out that solar is growing 17 times faster than the rest of the U.S. economy, and explained the cost advantage commercial solar plants already have over coal, gas, oil or nuclear enterprises. And he noted that “a lot of those jobs in the renewable energy sector are in red states like Utah, which are not going to benefit from the withdrawal of support” by President Trump.

How Fast Could U.S. Be Weaned off Fossil Fuels With Investment in a Real Electric Grid? RFK Jr. Weighs in

In the final episode of the series, Kennedy looked ahead: “We need smart transmission, we need smart grid technology,” he told EnviroNews. Renewable energy, distributed power generation and electric vehicles demand changes and new investment in the power grid. He foresees the day when the current electric utility companies are “going to be disrupted ultimately.”

Echoing Thomas Jefferson in the segment on CAFOs, Kennedy warned of the dangers of concentrated corporate power. “If you get rid of that diverse control of the landscapes, American democracy is doomed,” the environmental leader said with alarm.