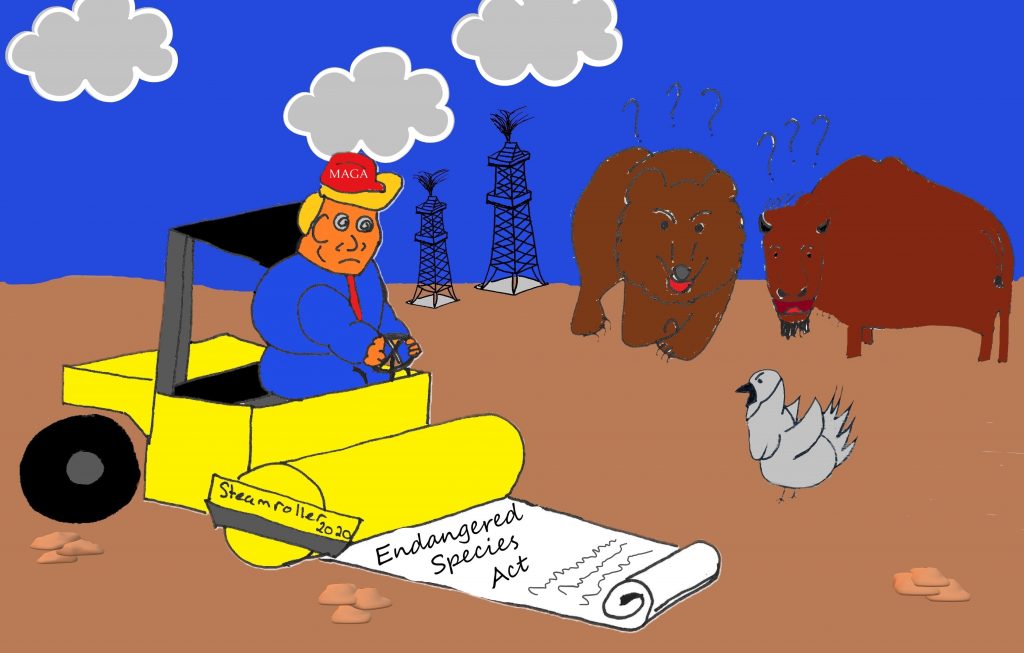 (EnviroNews DC News Bureau) — Washington D.C. — A rule finalized on Dec. 17, 2020, by the U.S. Fish and Wildlife Service (USFWS/the Service) will require the agency to consider the economic impacts when designating an area as critical habitat under the Endangered Species Act (ESA/the Act) — something Congress specifically forbade in 1982 for ESA decisions. But that was long before the Trump Administration got ahold of the Act.

Under the new rule, which “provides a framework” for assessing economic and other impacts when designating a critical habitat, the USFWS will be required to “assign weight” to industry claims, “which can be highly speculative,” according to a press release from the Center for Biological Diversity (the Center). But that’s not stopping the Service from painting a happy face on the recent change.

“In addition to improving consistency and predictability for stakeholders, these regulations will stimulate more effective conservation on the ground,” claimed USFWS Director Aurelia Skipwith in a press release.

In a related move, on Dec. 15, 2020, the Trump Administration finalized another rule that defined habitat for the first time, in a move that will deny protection of lands that could be restored for the purpose of species conservation. Now, an area can only be designated as “habitat” if it currently supports a population of animals of the species under review. Until now, the ESA had not defined habitat according to the USFWS.

“This is an early Christmas present to developers and polluters, who can now essentially veto the recommendations of expert scientists on where to protect critical habitat,” said Stephanie Kurose, Senior Policy Specialist at the Center for Biological Diversity. “On the heartbreaking path that Trump has set, our most vulnerable animals and plants will have nothing left, no place to call home.”

The proposed definition was released in July 2020 in response to the Supreme Court upholding the ruling of the 5th Circuit Court of Appeals in Weyerhaeuser CO. v. United States Fish and Wildlife Service. As reported by EnviroNews, John Roberts used semantics to pick apart the ruling. Roberts wrote in his opinion:

These two rules are a continuation of what EnviroNews deemed Trump’s “War on Wildlife” in an expansive news analysis. Over the last few months of Trump’s term, the Administration has set off a late-term barrage of anti-environmental, pro-industry policies that are designed to weaken the ability of the Interior Department and its underlying agencies to protect animals and plants from extinction. However, Kurose tempered the effects of the rule slashes in an email to EnviroNews:

The Endangered Species Act is an incredibly strong law, one that is based on the best available science to get our most endangered species on the road to recovery. With these two rule finalizations, combined with the 2019 rollbacks, some of the fundamental pillars of the Act have been significantly weakened and wildlife will suffer. However, we are hopeful the Biden Administration will rescind these rules and restore the full power of the Endangered Species Act when he is President.

While conservationists are still considering their legal options regarding these rollbacks, lawsuits against the Trump Administration and its policies have been effective, according to Erik Molvar, Executive Director of Western Watersheds Project (WWP), who said as much to EnviroNews Editor-in-Chief Emerson Urry in an on-camera interview last month. While discussing the sage grouse (Centrocercus urophasianus), the most politically embattled species in history, Molvar said WWP and its allies have been “kicking [the Trump Administration’s] butt in court.” Kurose is confident the trend will continue.

“The Trump Administration is doing everything in [its] power to cater to [its] polluting industry friends with this onslaught of regulatory rollbacks, but we are confident that ultimately we will win in the courts,” she concluded to EnviroNews.

(EnviroNews Nature) – Washington D.C. – Falling in line with a recent expansive EnviroNews report detailing a barrage of end-of-term rollbacks, species de-listings, and slashes to the Endangered Species Act (ESA), the Trump Administration’s Interior Department (DOI) announced it would be lobbing another volley of rollbacks at the…

(EnviroNews DC News Bureau) – In what prominent conservation group WildEarth Guardians (Guardians) is calling “death by a thousand cuts,” the Trump Administration is at it again, with another proposed change that would weaken the overwhelmingly popular Endangered Species Act (ESA/the Act). This go-round features an attempt to…