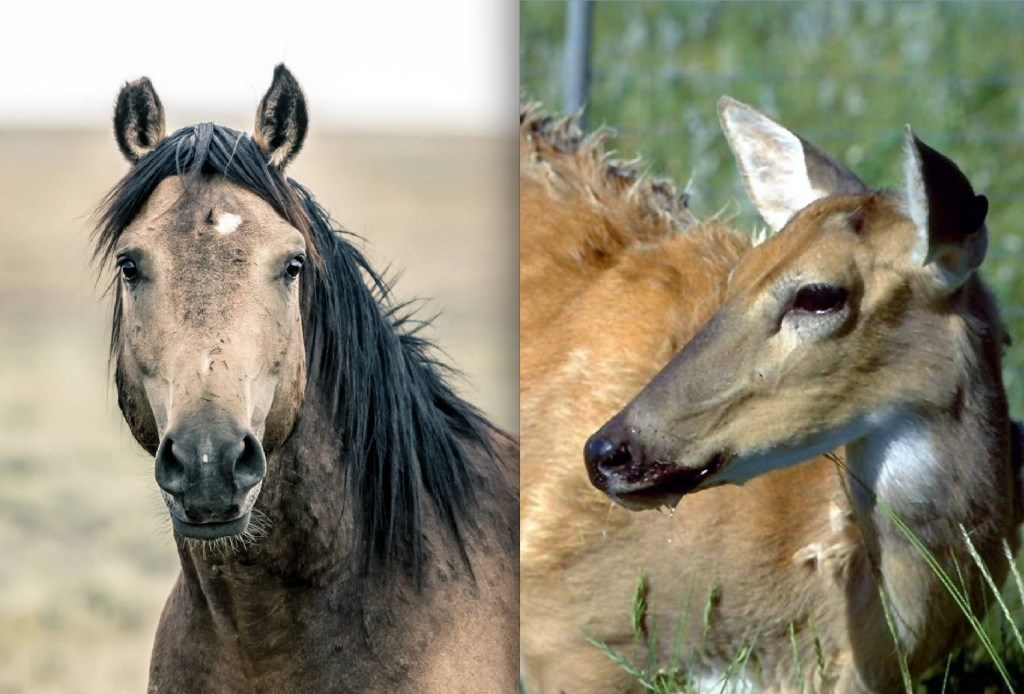 The findings take on increased significance considering recent research by Canadian and German scientists who found that the dreaded prion disease is easily transmitted to cynomolgus macaques (Macaca cynomolgus). Genetically speaking, this monkey is the closest thing to humans that can be used in laboratory research. Last year, Health Canada (the country’s equivalent to the Centers for Disease Control) issued a health advisory, warning that the “most prudent approach is to consider that CWD has the potential to infect humans.”

Making the situation even bleaker, the first cases of CWD were recently diagnosed in Montana and an explosion of the disease in other herds around the country, even the notion of a mitigating technique is welcome.

But can wild horse really help slow the spread of this deadly disease across the vast landscapes of the West? We explore that proposition below, but first a little background on the prion itself.

Prions (pronounced: \ˈprī-än\, or pree-on) are malformed proteins that cause abnormal folding of certain otherwise normal proteins in the brain, according to the Centers for Disease Control (CDC). Lacking a cell nucleus, a prion is not a bacteria or a virus, nor is it even alive — though it behaves much like a living, reproducing pathogen. 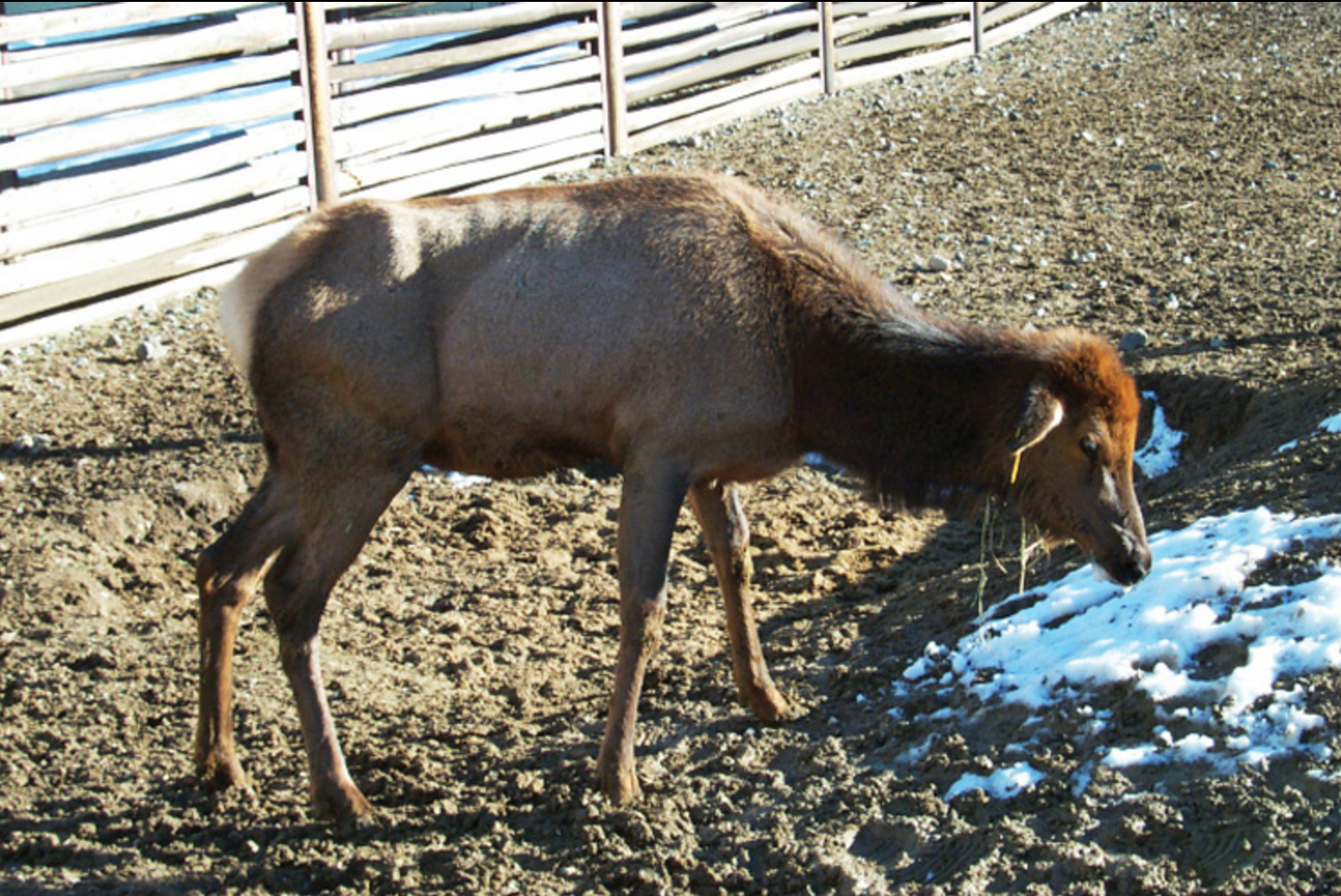 Symptoms of the “zombie deer disease” include severe weight loss (wasting), stumbling, and listlessness, with the disease eventually leading to death in all cases. The spread of the sickness has exploded in cervids throughout the West over the past decade, with about one-half of Colorado’s deer herds and one-third of its elk herds believed to now be infected.

CWD spreads through animal-to-animal contact and the contamination of food sources. Humans can increase the dispersal through the transportation of live animals, infected carcasses or contaminated crops; products made with cervid urine, saliva, or feces; and wildlife management practices that cluster animals together, such as federal and state agencies baiting and rounding up elk into wintertime herds. 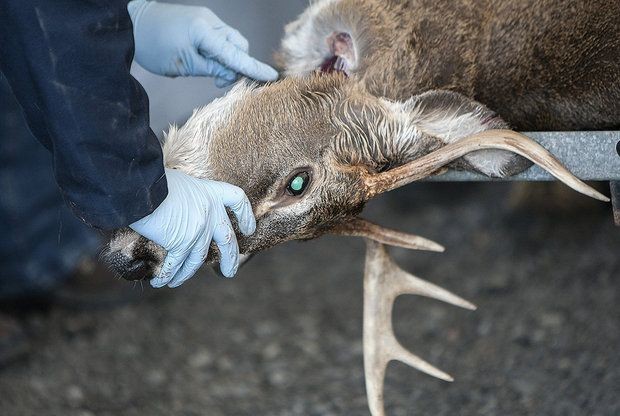 While a single case of CWD has yet to be found in humans, the CDC and other government agencies recommend that hunters take precautions when dressing deer and to test meat before eating. Disturbingly, prion illnesses can incubate in the human body for several decades before manifesting symptoms.

For years, Dr. Mark Zabel, Associate Director of the Prion Research Center at Colorado State University in Fort Collins, has been trying to stop the spread of CWD. In a phone interview with EnviroNews, he said studies have shown that horses are “atypically resistant” to prions and that there has “never been any case of naturally occurring horse prion disease.”

Good News for Horses, But What About Deer and Elk?

Zabel said he has “pretty strong evidence” he hopes to publish this year demonstrating that one of the most common ways for CWD to spread is when cervids browse on vegetation contaminated from infected saliva, urine, and feces. Hence, he said it’s possible that horses can consume some of the CWD-tainted material and “interrupt that indirect transmission of CWD prions from cervid to cervid.”

There are of course many obstacles to this plan, the most obvious being whether horses could even make a dent in the sheer amount of contaminated vegetation in the forest and whether the resulting ecosystem impacts would outweigh any benefits. Another hitch is that after consuming the prions, the horses would just release them back into the environment in their manure. 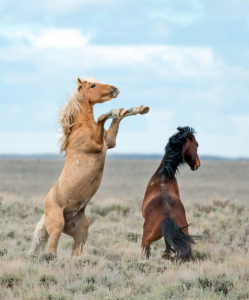 While acknowledging the limitations of the proposal, Zabel said that, “As prions traverse through the alimentary tract of an animal… the titers decrease.” What that means is, even though the prions would still be present in a horse’s manure, after it digests them, they would be far less concentrated, as well as sequestered in a substance cervids have no interest in browsing.

With his expectations firmly in check, Zabel is curious to find out if “[by tweaking] the indirect transmission just a little bit… [if] those processes would be enough to interrupt the indirect transmission of prions, and [if] that might be enough to stop the spread across the landscape into new areas.” He has applied for funding to test the hypothesis.

If Horses Can Put a Damper on CWD Prions, What Then?

As of March 2017, a total of 59,483 wild horses (Equus ferus) roam free on public lands across 10 western states, according to the Bureau of Land Management (BLM). Since the 1971 passage of the Wild Free-Roaming Horses and Burros Act, the BLM has managed these creatures through sterilization and by setting population limits in herd management areas (HMA) to “protect scarce and fragile resources in the arid West and ensure healthy animals.”

Additional specimens are rounded up and kept in pens or sold. The BLM currently houses 44,493 horses in off-range pastures, corrals, and sanctuaries and removes thousands more from the wild every year, with anywhere from half to the majority of the creatures getting adopted, though advocates offer evidence of some horses being sold for slaughter. 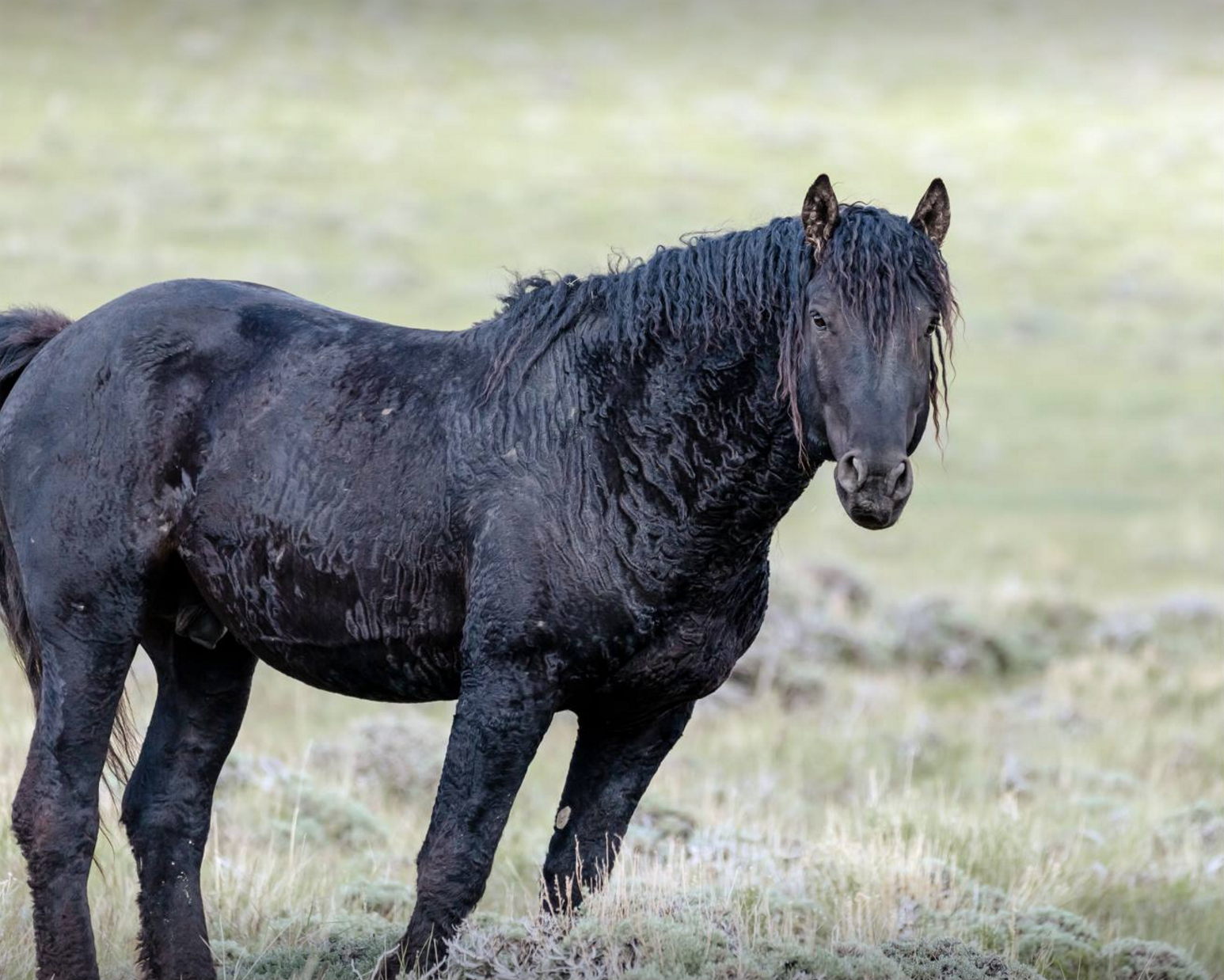 Wild Horse on the Western Landscape — Photo: Images by Ottilia

Author and wild horse advocate William Simpson told EnviroNews in a phone interview that he wants the BLM to release captured wild horses into the forest to gobble up vegetation that may be contaminated with prions and reduce wildfire fuels, the way he’s doing on his WildHorse Ranch in the Cascade-Siskiyou region of Northern California.

Does The Wild Horse Belong on the American Landscape?

Most studies estimate wild horses, along with dozens of other species of megafauna, such as giant sloths, wooly mammoths, and saber-tooth tigers, disappeared from North America around twelve thousand years ago — the most likely extinction culprits being rapid warming and overhunting.

Some scientists, such as Ross Macphee, curator of the Division of Vertebrate Zoology at the American Museum of Natural History in New York, claim that domestic horses contain much of the same genetics as their wild ancestors, with other studies corroborating that evidence. 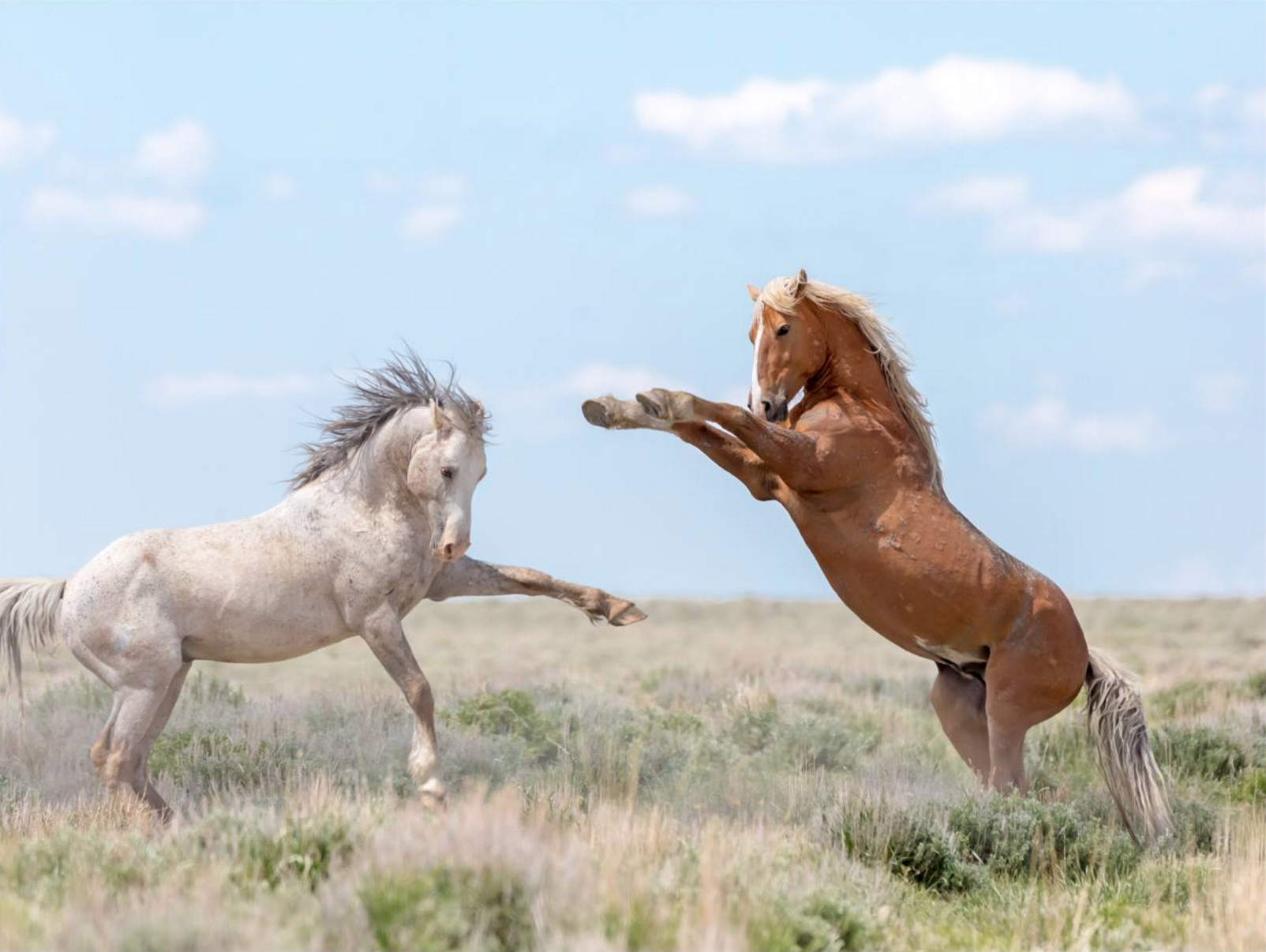 Wild horse advocates assert that returning the animals to their ancestral range, including the forest, makes ecological sense. Indeed, a 2017 study published in Nature Ecology & Evolution concluded that wild horses likely lived in “post-glacial forests,” a finding backed by several other studies.

“Horses have evolved on this biome, so putting them out there is just reintroduction of a proven native species,” said Simpson, adding that this method is the only one “that [would allow] scientists to study wild native horses in their environment, abating the prion problem.”

For Simpson, it’s not only about prion mitigation. He argues wild horses can also cut back on vegetation responsible for fueling California’s recent large wildfires, though a recent body of science points to climate, rather than fuels, as the main driver.

Gary MacFarlane, Ecosystem Defense Director for Friends of the Clearwater in Moscow, Idaho, maintains that releasing horses in public forests would do more harm than good. “I think [the introduction of horses is] kind of a manipulation of the national forests and I don’t think it’s right, especially in wilderness [areas],” MacFarlane said in a phone interview with EnviroNews. “The idea of wilderness is to have a few places where we decide not to consciously exert our will and let nature roll the dice.”

Though CWD has yet to be found in free-roaming deer or elk in Idaho, MacFarlane is concerned about the spread. However, informed by his degree in range management and the interaction between animals and the vegetation they eat, he points to what he believes to be the root cause of CWD’s spread: “[the] North American wildlife management model.”

MacFarlane asserts that over the last century, state fish and game agencies focused so heavily on propagating game species that they “didn’t look at the unintended consequences.” 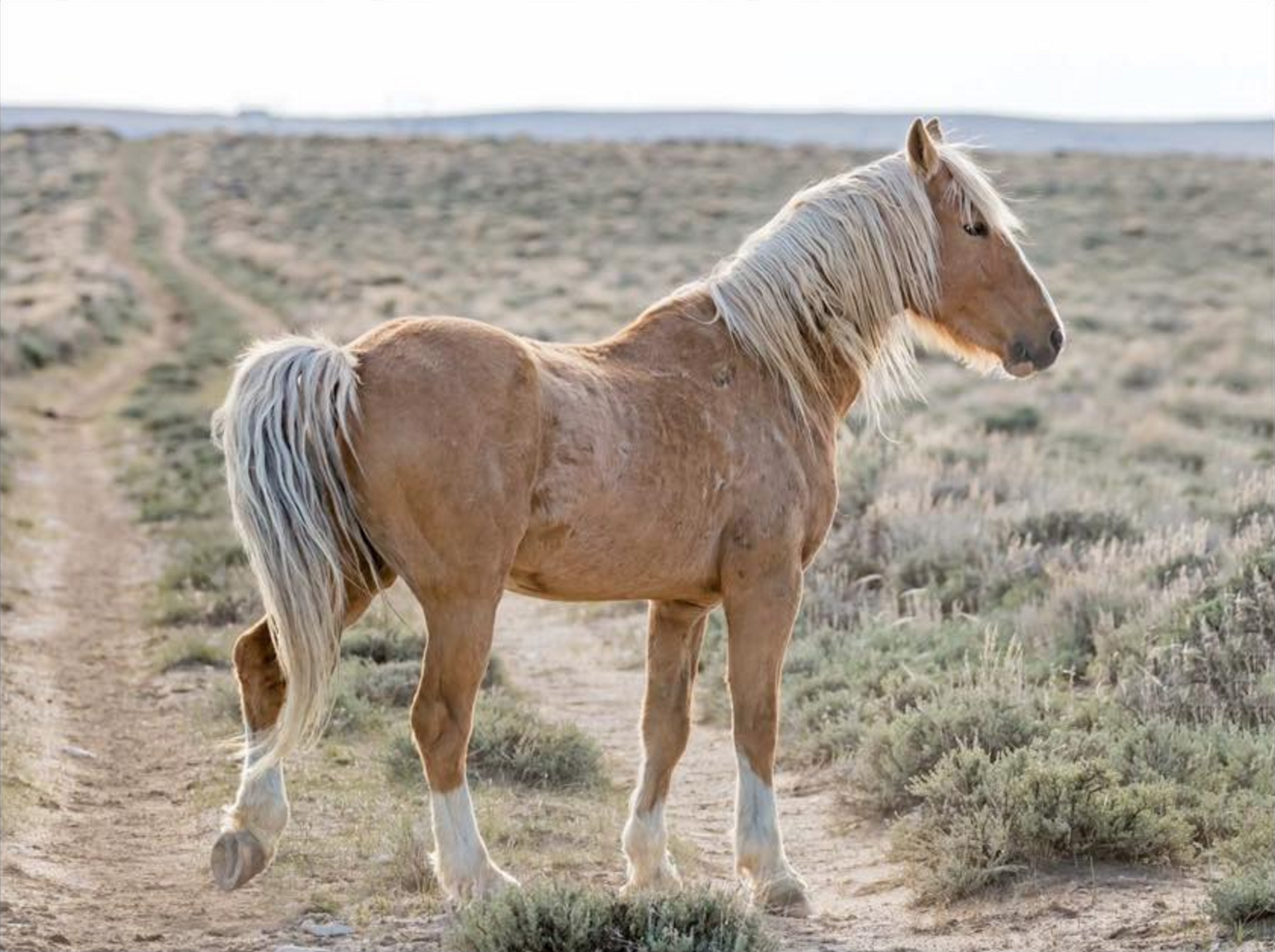 Combined with development and grazing that have reduced available habitat, an increasing number of deer have been forced to congregate in the few remaining winter ranges, MacFarlane explained. And it’s in those ranges that the highest disease transmission likely occurs.

Other than Simpson’s ranch and Zabel’s still unfunded proposal, there are no concrete schemes to introduce wild horses onto the land for the purpose of prion abatement or fuel reduction, and certainly not in national forests or wilderness areas.

Even if the horse angle is unfeasible, as CWD continues to spread like wildfire, perhaps Zabel’s research will open other doors that might lead to a solution.

All of the excellent photographs of wild horses featured in this article were provided by Images by Ottilia. You may visit their Facebook page here:https://www.facebook.com/ohmphotos/

OTHER REPORTS ON PRION DISEASE BY ENVIRONEWS:

(EnviroNews Utah) – PRION: a word that many have never even heard before, but little do they know that this deadly and virulent “pest” may be lurking right on their dinner plate, or inside their cute little pets Fluffy and Rover, or even right in dear ol’ Gramma’s…

Dr. Tyler Yeates MD Calls Out Stericycle For Incinerating Deadly Brain-Attacking Prions Into the Environment – Stericycle Owns Up to it

(EnviroNews Utah) – North Salt Lake City – In a shocking admission Thursday night at a heated town hall meeting, a VP from Stericycle has admitted that the company is allowed to accept and burn deadly and arguably indestructible brain-destroying prions at its North Salt Lake incineration facility…

(EnviroNews Utah) – Following Stericycle’s simply flabbergasting admission last Thursday night where they acknowledged that they are allowed to accept and burn deadly and largely indestructible prions, protestors took to the streets outside one of the country’s last standing hazardous medical waste incineration plants. Prions are the malformed…

Amy Uchida, 4th Year Medical Student at the U of U, is Asked About Stericycle’s Incineration of Deadly Prions

(EnviroNews Utah) – According to documents on the Department of Environmental Quality website, Stericycle’s permit needs to be renewed by August 19, 2013. The company’s current permit expires on Feb. 19, 2014. Regg Olsen is listed as the contact at the Department of Air Quality (DAQ) in charge…