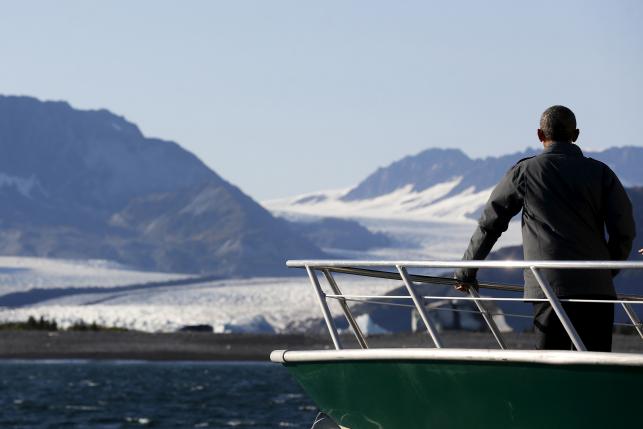 (EnviroNews DC News Bureau) — As President Obama galavants around the Alaskan Arctic with the press this week in a historic climate tour reinforcing his “All-of-the-Above” energy policy, a group of diverse and well-known environmental leaders says that philosophy just won’t cut it — and it collectively released a letter this morning telling the President just that. Mark Ruffalo, Ed Begley, Josh Fox, Winona LaDuke, Tim DeChristopher, Julia Butterfly Hill, and David Suzuki, to name a few, were amongst the letter’s 80-plus well-known signers.

The coalition called the President’s goal to reduce carbon emissions by 26-28 percent by 2025 “weak,” saying the plan is too lethargic considering earlier calls for the U.S. and China to reduce greenhouse gas emissions have been largely ignored.

The group implores the President to change course and accelerate America’s zero-emission target date to 2025, instead of 2100 like was pledged at a meeting of G7 nations on June 8, earlier this year.

The letter titled, “Moment Of Truth For Your Climate Legacy” also takes aim at Obama’s “All-of-the-Above” energy policy, calling for its abandonment, and imploring the leader of the free world “protect all that we love” instead.

The letter says “international justice demands” the President change course before the UN Climate Conference, scheduled for Paris three months from now where leaders from 190 nations will assemble to address global warming. The letter states, “Three months is ample time for [Obama’s] administration to draft a legally binding zero emissions commitment for Paris.”

“Innovating our way to zero emissions through an all-hands-on-deck societal mobilization at wartime speed is not only our best hope for averting climate catastrophe – it is key to revitalizing our economy and putting America back to work,” the letter states.

“The Obama administration calls climate change a global threat on the scale of World War II, so why are they not responding with a World War II-scale emergency mobilization?” stated Margaret Klein Salamon, founder of The Climate Mobilization, and a spokeswoman for the signers-coalition.

Tom Weis, of Climate Crisis Solutions, was the initiator of the letter, and told EnviroNews in front of the White House in 2014 that America needs to lead with a “green energy moonshot” for the world to circumvent global disaster.

When asked whether the cattle and agricultural sectors would need a complete overhaul as well to meet the ambitions zero-emission demand laid out in the letter, Salamon told EnviroNews D.C. News Bureau this:

Yes, agriculture will need a major overhaul, which will accomplish several goals: adapt to already-occurring changes so as not to allow climate change to decimate our food supply, eliminate emissions, and sequester carbon. Local farming, permaculture, biochar, and reduction of meat consumption will likely all be key elements in the transition. Obviously, this will require a tremendous mobilization, which is precisely what we are calling for. Don’t forget: during WWII 40% of vegetables were grown at home, in Victory Gardens.

Obama’s policy and subsequent actions on climate issues have been under fire as of late over the Department of Interior’s (DOI) green-light for Shell to perforate the seafloor for oil in the Arctic’s Chukchi Sea. The President reinforced DOI’s decision just before heading to Alaska this week for what will surely be remembered, one way of the other, as a historic presidential climate tour.

Of further concern to environmentalists earlier this year, was the approval of two massive coal permits by DOI’s ancillary Bureau of Land Management (BLM) in Wyoming and Montana. The smaller of the two permits grants a hall-pass for producers in the Cowboy State’s infamous Powder River Basin (PRB) to pillage an additional 10 billions tons of coal from the area. This permit, if actualized and burned for fuel, would emit 16.9 billion tons of carbon pollution and compose the largest single-source carbon bomb in the history of the world. The PRB plan was introduced on May 29, 2015, but around the same time, the BLM also rolled out a proposal for Montana’s Miles City Field Office that would allow coal miners to go after 71.2 billion tons of coal there — in what would be a carbon bomb seven times the size of the PRB plan.

Moves like these quietly rolled out coal permits and Obama’s recent reinforcement of Shell’s Arctic drilling endeavors are opening the door for strong criticisms from environmental groups to be sure. Today, climate activists are eagerly awaiting a response from the Administration, or the President himself, on the ambitious demands introduced in this letter — demands the signers say are critical for maneuvering the rapidly unfolding climate crisis.

The short open letter to the President, can be read in its entirety just below.

AN OPEN LETTER TO PRESIDENT BARACK OBAMA:
MOMENT OF TRUTH FOR YOUR CLIMATE LEGACY

The moment of truth for your climate legacy has arrived. More than four years ago, you received an open letter from some of the nation’s top planetary protection leaders urging you and the president of China to publicly declare a global climate emergency by committing our respective nations to 80% carbon cuts by 2020.

Because that urgent call was not heeded, we have lost precious time in the race to save civilization and must now set our sights even higher. It is with a deepening sense of dread over the fate of humanity that we call on you today to use the powers of your presidency to champion a U.S. goal of net zero greenhouse gas emissions by 2025.

Innovating our way to zero emissions through an all-hands-on-deck societal mobilization at wartime speed is not only our best hope for averting climate catastrophe – it is key to revitalizing our economy and putting America back to work.

In three months, you and leaders from more than 190 nations will gather in Paris for the UN Climate Conference to negotiate a global climate accord. Intergenerational justice demands that the centerpiece of that accord be zero emissions, a goal UN Secretary-General Ban Ki-moon calls “ambitious but achievable.” Three months is ample time for your administration to draft a legally binding zero emissions commitment for Paris.

As you know, Pope Francis wrote in his recent encyclical: “Reducing greenhouse gases requires honesty, courage and responsibility, above all on the part of those countries which are more powerful and pollute the most.” Since the U.S. historically contributed the most to global climate pollution, and is in the strongest position to respond, we have a moral imperative to lead the zero emissions charge in Paris.

The current weak U.S. target of 26-28% carbon cuts by 2025 cannot be described as honest, courageous or responsible in the face of a crisis that threatens the continued existence of humanity. To pretend otherwise is to
recklessly gamble with the fate of future generations. For the sake of our children, and those to follow, it is time to stop promoting “Allof-the-Above” and start protecting all that we love.

MORE FROM THE SIGNERS OF THIS LETTER ON ENVIRONEWS

OTHER PRESSING CLIMATE NEWS ON ENVIRONEWS