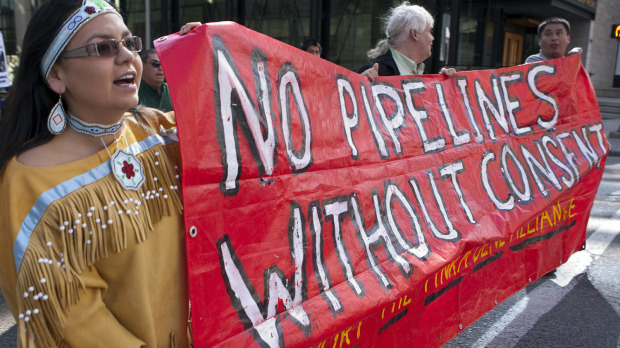 (EnviroNews DC News Bureau) — Port Simpson, British Columbia — In a decision that will undoubtedly inspire people around the world, the Lax Kw’alaams Band of First Nations natives in British Columbia, Canada have rejected a billion dollar offer to sell out to the interests of big multi-national oil and gas.

The tribe had been offered $960 million to give their blessing for the construction of the Prince Rupert Natural Gas Pipeline and Pacific Northwest LNG terminal and processing facility on their land by Malaysian energy giant Petronas — but in the end, council members of the band voted unanimously to reject the offer cold.

The decision by the Lax Kw’alaams, who are part of the Tsimshian tribes, came on the heels of a Canadian supreme court ruling roughly a decade ago that codified that small Canadian tribes who never signed into treaties with the Canadian government shall be accommodated and given a voice concerning projects that would impact the treaty-less tribes and their lands.

Another supreme court ruling was made last year, strengthening the older decision, and although the ruling stops short of requiring consent by the tribes for this type of project, legal experts say it is unlikely that energy giants would simply steamroll the tribes’ wishes due to the possibility of extreme backlash and civil unrest.

The Lax Kw’alaams live near the coastal rain-forests of British Columbia, and in a recent bulletin the band expressed serious concern about how the project would adversely affect native fish and plant life, and said that environmental studies conducted by the Pacific Northwest LNG group were not congruent with their own.

The Skeena River is said to be the most fertile breeding ground in all of Canada for salmon, and the band has expressed major environmental concerns over the effect the LNG processing facility would have on native sea grasses that provide shelter for juvenile salmon from predators.

Additionally, the bulletin addressed the issue of Lelu Island, part of the Skeena River Watershed saying that the project would render the island off limits. The document stated:

In all, the tiny native band has around 3,600 members, and had they caved to the desires of the Malaysian transnational oil giant it would have meant that each member of the tribe would have ultimately been about $267,000 richer — but when the day was done, the Lax Kw’alaams apparently chose to flow in alignment with an old native proverb from their Canadian Cree neighbors that advises the white man:

In their monumental and inspirational decision, Gary Reece, Mayor of the band, had this to say:

Hopefully, the public will recognize that unanimous consensus in communities (and where unanimity is the exception) against a project where those communities are offered in excess of a billion dollars, sends an unequivocal message this is not a money issue: This is environmental and cultural.

In similar fashion, on April 29, 2015, the Lakota Sioux invoked the “Bad Men” treaty clause of the Fort Laramie Treaty of 1868 and demanded the U.S. Government throw TransCanada out of South Dakota on their ear over the Keystone XL Pipeline.

Now, in the wake of this epic rejection of big oil’s tempting monetary bribes by the Lax Kw’alaams, the world is left to watch and wonder if more and more Native American tribes will follow suit in an outright refusal of oil and gas plans.