Up Yours! Revenge: Mexican Matador Gored up the Butt With 11 Inches of Bull Horn - EnviroNews | The Environmental News Specialists
Skip to content 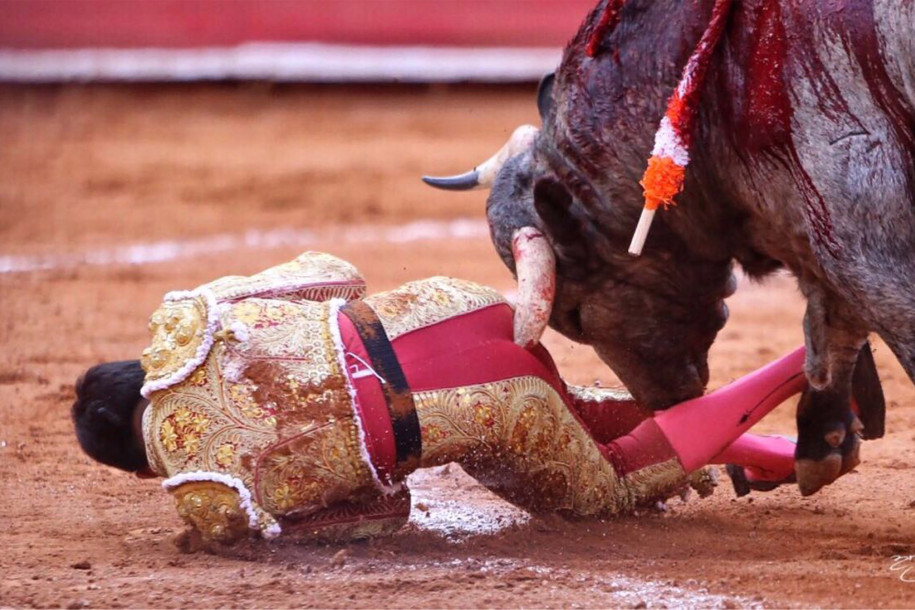 (EnviroNews World News) — Mexico City, Mexico — A large bull with the number 522 spray-painted on his side has taken gory revenge after first being speared multiple times in a bullfight in Mexico City with bullfighter Antonio Romero, in mid-March of 2017.

In what the New York Post referred to as a “stomach-churning” clip, things start off well for Romero, with the bullfighter in seemingly calm control, as he repeatedly deflected charges from 522 with his muleta — the traditional red cloth used by bullfighters to lure the animals into charging.

But then things took a turn after 522 cliped Romero on the arm and hip, knocking the bullfighter off balance, and opening the door for the bull’s bloody payback.

After tossing Romero like a rag doll, 522 rolled him around on the ground with his horns, churning him in an anxiety-filled episode, until bang! — the final blow: 11-inches of bull horn, skewered right in Romero’s rectum.

Romero was only rescued after comrade bullfighters rushed in to distract 522.

Video shows the bullfighter being carted off on a stretcher and loaded into a Mexican ambulance, whereafter he was reportedly rushed to the hospital for “severe injuries” to his rectum. It is not known to EnviroNews World News at this hour if the bullfighter has been discharged.

The practice of bullfighting is many centuries old, and though typically associated with Spanish culture, spans many countries and civilizations. In an ideal world, animal rights advocates could cheer for the bull in a truly fair fight where if the bull killed or incapacitated the matador, he would be set free and honored as the winner. Sadly for the animals, that’s just not that case when it comes to Spanish bullfighting.

In actuality, it’s not just one brave bullfighter versus one bull. The matador has multiple assistants called “picadors” that ride around on horseback and first stick the bull, bleeding, disorienting, and tiring the animal. Then more assistants called “banderilleros” come in on foot and dizzy the bull while sticking it with harpoon-like pins, before the final stages of the fight where the animal is finally killed by the matador. And disturbing to many is what is done to the animal before the fight ever begins — practices that create for an uneven playing field to say the least.

The bull has wet newspapers stuffed into his ears; vaseline is rubbed into his eyes to blur his vision; cotton is stuffed up his nostrils to cut off his respiration and a needle is stuck into his genitals. Also, a strong caustic solution is rubbed onto his legs which throws him off balance. This also keeps him from lying down on the ground. In addition to this, drugs are administered to pep him up or slow him down, and strong laxatives are added to his feed to further incapacitate him. He is kept in a dark box for a couple of days before he faces the ring: the purpose of this is to disorientate him. When he is let out of the box, he runs desperately towards the light at the end of the tunnel. He thinks that at last his suffering is over and he is being set free — instead, he runs into the bullring to face his killers and a jeering mob.

It is not known to EnviroNews World News what happened to 522. It’s likely he was finished off by one of the matador’s assistants, which is usually the case after a bull puts down a bullfighter. Many animal rights advocates have said that’s just not a fitting prize for an animal that beats his challenger fair and square.