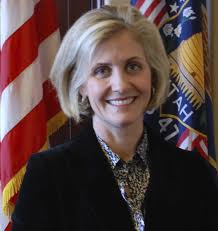 (EnviroNews Utah) — Salt Lake City, Utah — The Administration of Utah Governor Gary Herbert announced on April 23, 2015 that Amanda Smith, six-year veteran at the helm of Utah’s Department of Environmental Quality (DEQ), will be leaving the post. Appointed by Jon Huntsman, Jr., Smith has indicated that she will take an undisclosed job in the private sector.

“It’s a difficult decision because I have enjoyed working with such a high caliber staff at DEQ,” Smith said. “But, I leave at a time when many great things set the stage for a smooth transition.”

Gov. Herbert praised Smith for her ability to solve environmental issues through collaboration, and for improving the agency’s efficiency by removing bureaucratic roadblocks.

Reaction in the advocacy community was immediate, as many are on edge about a recent application by Energy Solutions to accept depleted Uranium at their hazardous waste site in Clive.

“While we haven’t agreed with every decision the DEQ has made, we’ve always known that Amanda is motivated by a genuine desire to protect public health and the environment and we’ve appreciated her intelligence, frankness and willingness to consult with advocates,” said Matt Pacenza, director of HEAL Utah.

It is unclear who may be on Governor Herbert’s shortlist to replace Smith. Information from the administration was limited.