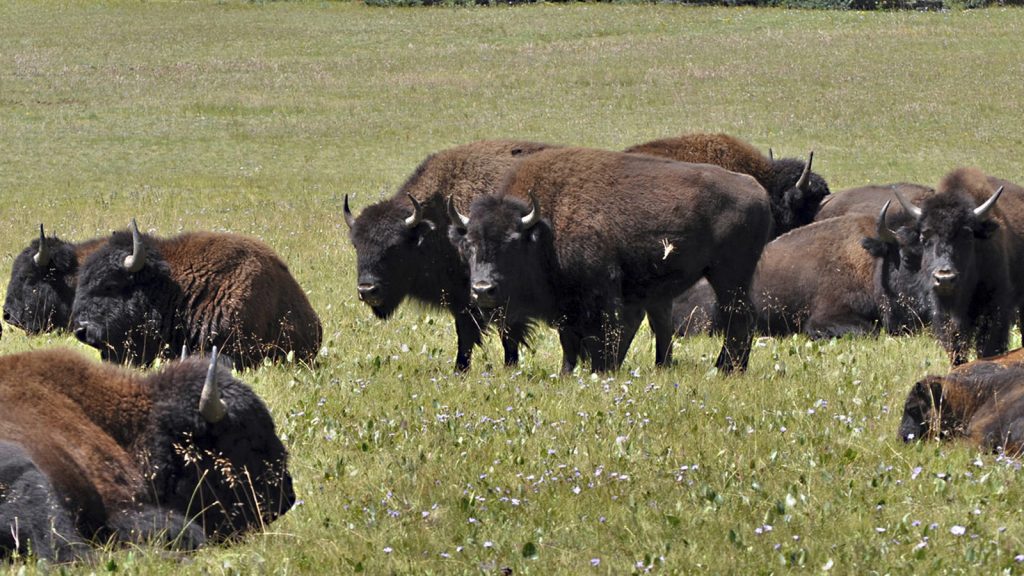 (EnviroNews Arizona) — North Rim, Arizona — The U.S. National Park Service (NPS) gave its final approval this month for a bison (Bison bison) hunt and relocation program that would drastically thin a 600-animal herd, residing in the park’s North Rim, to less than 200 by next year.

Claiming that the animals are destroying park resources, the NPS is looking to recruit persons handy with a firearm to shoot and kill the iconic creatures. According to Carl Lutch, a wildlife manager for the Arizona Game and Fish Department (AZGFD), participants would need to demonstrate they are “capable of hiking eight miles a day, carrying a 60-pound pack and hitting a paper plate 200 yards away five times” to be eligible for the hunt, according to the Associated Press (AP).

Bison that are not shot and killed by volunteer hunters will be trapped and relocated to other places. It is not yet clear how many animals will be killed and how many will be relocated, but Sandy Bahr of the Sierra Club told the AP she’s “hopeful Grand Canyon will focus mostly on nonlethal removal.”

But the Grand Canyon bison herd is already hunted on an annual basis. The AZGFD holds a lottery for hunting tags each year in the Kaibab National Forest, and according to the AP, issued 122 tags to individuals from a group of over 1,500 applicants this season.

“I would go if I had a chance to retain a portion of the meat,” said Travis McClendon, a hunter in Cottonwood, to the AP. “It definitely would be worth going, especially with a group.”

The reduction plan is set to be executed primarily above 8,000 feet between the months of October and May, when the road to the North Rim is snowed in and closed. The meat and hides will be carried out via snowmobile, sled and helicopter.

In recent years, the herd has been moving from national forest land adjoining the Grand Canyon, to locations within the park’s boundaries — places where open hunting is prohibited. According to park officials, the grazers are now trampling native vegetation and ruining water resources in the precious tourist attraction.

The notion the herd is damaging the park is an interesting one, especially since an NPS report from earlier this year elucidated that bison were native inhabitants of this area — before settlers hunted them to near extinction that is. The current herd however, is there due to a failed buffalo-cattle crossbreeding venture, attempted by rancher and buffalo skinner Charles Jesse Jones in the early 1900s. After the beefalo flop, the state of Arizona took ownership over the animals and they’ve grazed the countryside around the Grand Canyon ever since.

This chapter in the American bison’s perilous plight is one amongst many, in a story that includes what is surely one of the bloodiest abominations in the history of wildlife massacres. Westward settlers reduced the largest migratory hoofed herd on earth — a herd totaling 50 million — to a paltry 1091 animals over the course of several decades. The reason behind that nineteenth century buffalo bloodbath is even more appalling: oftentimes, the iconic roamers were killed simply to cut off the life’s blood of recalcitrant Native America tribes, who without the bison’s meat and parts, were most definitely doomed.

The massive herd functioned for millennia as an integral part of the American ecosystem, and painted the U.S. landscape far and wide. But those 50 million animals have been replaced by some 90 million cattle today, and its those non-native animals that are now everywhere throughout the country — not the bison. For some buffalo advocates, the idea that a still-wild group of these animals could be harming the ecosystem, is beyond absurd. The sentiment from some folks is that perhaps it would be better to remove 400 cows from this area instead, and let this wild and adapted herd stay intact, right where it is.

But the attitude of others is that it would be great fun to go on a backpacking trip in the Grand Canyon and kill one of these creatures with a hall pass from the federal government — and that’s exactly what the National Park Service wants. On the bright side, NPS has announced that heads and hides from the hunt will be given to local tribes and that volunteer hunters will be required to use non-lead bullets as to not poison the resident California Condors (Gymnogyps californianus).

OTHER STORIES ABOUT THE GREAT AMERICAN BISON FROM ENVIRONEWS