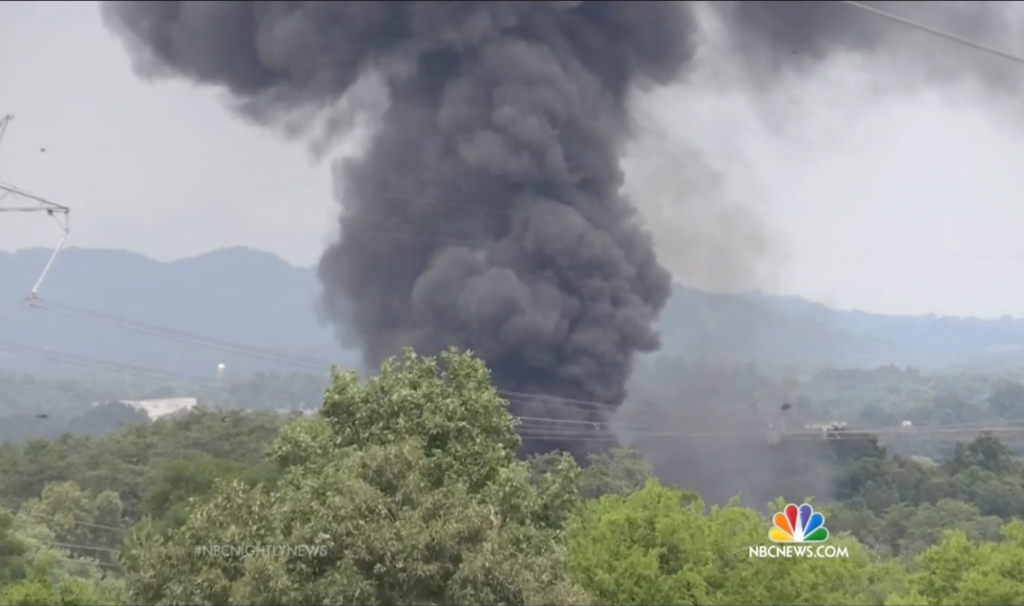 (EnviroNews World News) — Maryville, Tennessee — A community is still reeling after a train derailment and subsequent oil car explosion and toxic fire in Maryville, Tennessee, in the early morning hours on July 2, 2015. Over 5,000 people were evacuated overnight spanning a two mile radius.

As of about 7 p.m. CST the fire is burned out, but it is still smoldering with poisonous fumes, said county officials. Reports on the ground say that the smoke is diminishing slowly although it is anticipated that people will remain evacuated for at least another 24 hours. At least two shelters have been set up on the ground for the victims — citizens terrorized in the middle of the night in the confused, smokey melee’ that occurred when they were frantically herded away from their homes in the muddled emergency evacuation last night.

The train was carrying acrylonitrile — a highly flamable and toxic gas used in plastic making and the manufacture of acrylic fibers and other polymers. Prolonged exposure to the poisonous fumes can make a person sick, or even kill them.

“The CSX train consisted of 57 cars, including 27 cars that were carrying hazardous material: nine were carrying acrylonitrile, 16 had propane and two had asphalt,” reported USA Today.

All available Cyanokits, an intravenous antidote drug kit, in Maryville and surrounding communities, have been scrounged together to treat victims for cyanide poisoning. The kits contain Hydroxocobalamin — a substance that mitigates the effects of cyanide inhalation. It is not known to EnviroNews at this time how many kits have been dispersed.

At least 52 residents have been transported to the hospital, of which at least 25 have been admitted for treatment from exposure to the deadly gas, according to USA Today. 10 of those were first responders who suffered burning eyes, skin and respiratory problems. Groundwater is also an issue as chemicals have been spewing from the compromised tankers. Craig Camuso, CSX Regional Vice President for State Government Affairs said at a press conference today that they were not yet aware how much of the chemical had escaped into groundwater sources and urged residents drinking well water nearby to refrain from using their home water supply until tests were conducted. However, officials reiterated that they had no confirmation weather or not any of the chemical had actually spilled into water supplies.

Tragic chemical spills from train derailments certainly aren’t new in America. In an article from 2013, EnviroNews California recalled the Cantara Loop spill in Northern California wherein an entire river eco system for 45 miles was annihilated — completely killed — when a chemical train derailed and spilled into the Sacramento River. Fish were filmed literally jumping out of the river to escape the chemical burn following the breech. Oil “bomb train” explosions are also becoming ever more prevalent in the United States today as the practice of hauling hydrocarbons by rail has increased by thousands of percent over just the past decade due to the Bakken oil rush and other fracking booms around the country.

Although DOT has been making a move to see oil and chemical cars upgraded from a totally old and outdated model, still widely in use, known to be defective and dangerous — to a newer model that still blows up, but is less dangerous — many residents living near the tracks are not convinced and tell EnviroNews they feel uneasy as more and more “bomb train” explosions happen around the country.