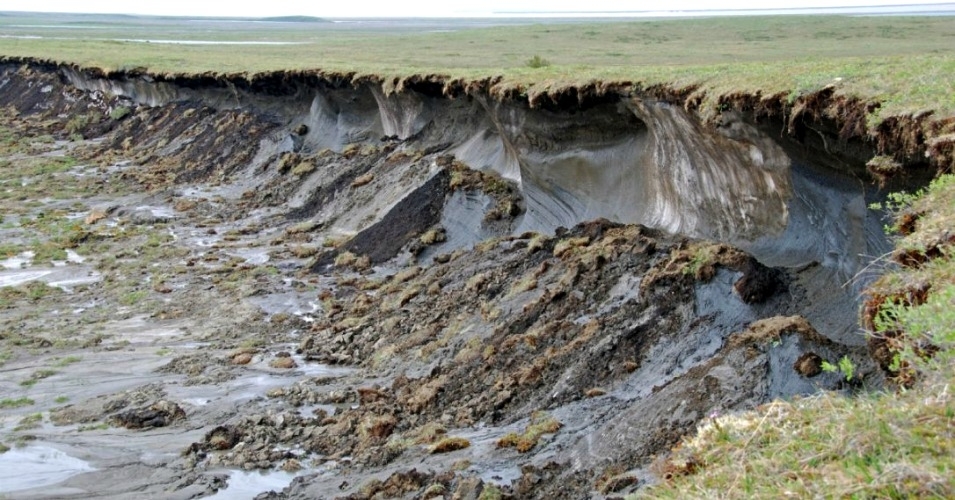 (EnviroNews Alaska) — Alaska’s warming permafrost is now giving off more greenhouse gases than it traps during the growing season, according to a new study published May 8, 2017, in the Proceedings of the National Academy of Sciences (PNAS).

The amount of carbon trapped in Arctic soil is greater than the total carbon contained in all living vegetation on Earth. And while permafrost has been thawing slowly for centuries, the Arctic has been warming at double the pace, as compared to the global average, over the past 50 years, according to the latest report from the Arctic Monitoring and Assessment Program (AMAP), published April 25, 2017. A key finding of the report is that the area of near-surface permafrost in the Arctic could decline by an additional 35 percent by mid-century.

The PNAS study found that greenhouse gas emissions from the October through December period have increased 73 percent since 1975, correlating with higher summer temperatures. Equally bleak findings were revealed by scientists from the Harvard School of Engineering and Applied Sciences (SEAS) who combined data from a three-year NASA aerial survey, covering 2012 to 2014, with satellite measurements and stationary sensors in Barrow, Alaska. They determined that in 2013, 40 million more tons of CO2 were released from Alaskan soils than were absorbed by vegetation.

The AMAP report states that autumn and winter temperatures in the Arctic will continue to increase dramatically, reaching 4-5 degrees Celsius (about 7-9 degrees Fahrenheit) above late 20th century levels before 2050. The report states, “These increases are locked into the climate system by past emissions and ocean heat storage, and would still occur even if the world were to make drastic near-term cuts in emissions.”

In a press statement, Margaret Williams, Managing Director of the U.S. Arctic Program for the World Wildlife Fund (WWF) said, “The scope and scale of change in the Arctic shown in this report underscore the urgency for reducing the emissions driving climate change and ensuring any future development in the region is done sustainably.”

Melting permafrost holds other potential dangers. Scientists are concerned that long-dormant viruses and bacteria, some that humans have not been exposed to for millennia, and may have no resistance to, could be released as these soils warm.

It’s not science fiction. It’s already happened. A 12-year old boy in Siberia died of anthrax in 2016 when a 75-year-old frozen reindeer carcass thawed from the gelid ground that held it. Evidence of smallpox has been found in corpses from the 18th and 19th centuries, and from Stone Age peoples. Bacteria that had been frozen for 32,000 years in an Alaskan pond were successfully revived, and an eight million-year-old microbe was brought back to life from an Antarctic glacier.

Permafrost melt in Canada’s Northwest Territories has caused huge swaths of land to subside, creating what geoscientists call thaw slumps. More than 490,000 square miles of these thaw slumps have been mapped along the edges of the Laurentide Ice Sheet by the Canadian team.

Coastal erosion due to permafrost thawing is now consuming 65 feet of Arctic coastline a year in some locations. Indigenous communities along Alaska’s coasts, including in the towns of Kivalina and Shishmaref, are now amongst the world’s climate refugees, as many residents were forced to relocate after their homeland melted beneath their feet.

Sediment from permafrost erosion can impact the entire ecosystem along the coast. “It may affect the whole food web including fish or prey for [shorebirds]. With such effects on the coastal biology, permafrost erosion has a direct impact on the quality of life of northern residents,” said Michael Fritz, a researcher at the Alfred-Wegener Institute (AWI) in Potsdam, Germany, in an email.

Forty years ago, Alaskan Arctic soils froze over in about a month. Now, they take three times longer to freeze. “Tundra soils appear to be acting as an amplifier of climate change,” said co-author of the PNAS study Steve Wofsy, Professor of Atmospheric and Environmental Science at SEAS. More carbon released into the atmosphere from thawing permafrost creates a feedback loop that will accelerate global warming, in turn melting more frozen soils.

(EnviroNews World News) – Yamal Peninsula, Siberia – When rain started falling on the reindeer herd in the arctic region of Yamal Peninsula in Siberia in November of 2013, it is unlikely the reindeer (Rangifer tarandus) themselves thought anything of it. After all, harsh weather conditions mean little…