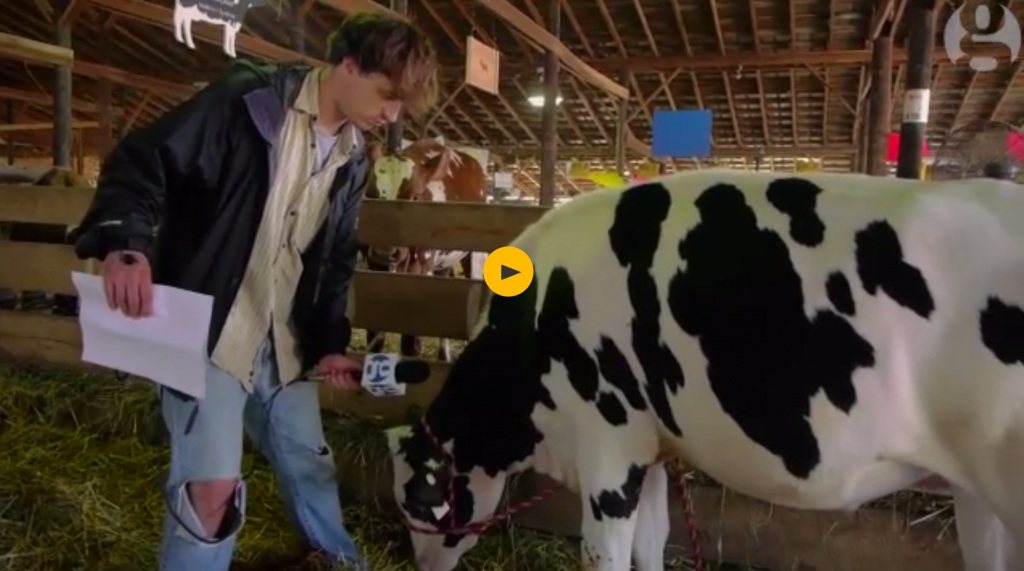 (EnviroNews World News) — Moo or False? Cows are a bigger contributor to climate change than cars? That would be moo. It was questions similar to this one (composed by EnviroNews) that were asked respectfully by The Guardian reporter Travis Irvine to a bunch of very sexy looking cows at the Pickaway County Fair in Circleville, Ohio.

In the extraordinarily entertaining, yet seriously factual news piece, the reporter proceeds to interview these show-cows on several important topics related to climate change.

The piece carries the headline, “Cows speak up on climate and come clean about their own emissions,” and is “utterly ridiculous” (pun intended) and hilarious on one level — while being deadly serious on the other hand.

“In one year, a single cow produces more methane than the equivalent greenhouse gas emissions from an average-sized US vehicle in that same time period” — those are the words plastered on the screen at the start of Irvine’s news-brief — over a music-bed resembling the Rawhide soundtrack from the 60s TV series — only mixed with a punk rock beat.

“Excuse me Ms. Patty (as in cow patty), are you full of methane?” Irvine asks before putting the reporter mic toward a pile of freshly dropped cow dung. “Ok, moo or false?” he asks a group of clean and sparkly cows awaiting to be shown in the fair: “A single cows produces 30-50 gallons of methane gas a day?” Following a loud chorus of moos from the lovely and docile cow-flock, Irvine affirms, “Moo. That is correct. Very good.”

On and on the video rolls in this manner, showcasing several key questions that explore the incredible havoc being wreaked on the climate by humanity’s insatiable appetite for beef, leather and dairy products.

Though this newsreel is entertaining and funny, the matter at hand is deadly serious. When you hear about climate change in the media or from environmental groups, the finger is usually being pointed firmly at fossil fuels, but when one actually boils down the facts and figures it becomes clear that agriculture, and the deforestation that comes along with it, is every bit as much to blame — if not more — and there’s an increasing body of literature out there to back that assertion.

On this very topic, a brazen independent documentary was released earlier this year titled “Cowspiracy” and the film has since gone viral. The climate facts connected to the cow in the film are so devastating in fact, that upon its release, social media exploded with posts by people around the world, in one way, shape, or form saying they had just seen the movie, and had eaten their last hamburger, or were giving up meat entirely.

A slow transition from vegetarian to vegan & @Cowspiracy gave me the final push. #NoNeedForMeat #GoVeganSaveTheWorld https://t.co/vSmz1IIk5H

One of the most shocking things about Cowspiracy, is watching the humble filmmaker get completely shut out by Greenpeace, 350.org, the Sierra Club and other organizations — prominent groups who have vilified the fossil fuel industry for disrupting the climate, while scarcely lifting a finger to bring awareness to the fact that agriculture is just as big a problem, if not worse.

Finally, Cowspiracy’s Director/Narrator gets a little karmic justice for all the doors being slammed in his face, when a retired Sierra Club worker flatly admits these groups don’t want to touch the agriculture industry with a ten-foot pole because they are donation-driven and don’t want to promote any positions that might be unpopular with their base — any stance advocating lifestyle changes that is.

In addition to greatly exacerbating climate destabilization, the agricultural sector is also far-and-away the biggest consumer and polluter of the world’s drinking water supplies — a point repeatedly hammered home in Cowspiracy by some simply flabbergasting statistics.

Earlier this year, in bold fashion, The Guardian made an announcement that it was intentionally crossing over into the world of climate activism with its #KeepItInTheGround campaign. Since then, the old-school UK newspaper, founded in 1821, has been more outspoken than ever in its climate reports — demonstrated above in Irvine’s piece.

Tim McDonnell of Mother Jones, a partner of Climate Desk, wrote this in regards to The Guardian’s trailblazing move:

The idea of a newspaper undertaking an openly activist campaign straight from the playbook of Greenpeace or the Sierra Club might seem strange to American audiences, who are accustomed to news outlets at least purporting to adhere to some degree of journalistic objectivity. But in the UK, newspapers taking a step across the line between news and activism is, well, less newsworthy.

EnviroNews USA and all of its corresponding bureaus, affiliates and divisions, including EnviroNews World News have, since their very inception, embraced the editorial position that manmade, anthropogenic climate change is indeed very real, and unfolding at a horrifying pace. EnviroNews stands with The Guardian, and many other prominent news agencies such as the LA Times and even the BBC — long-standing news companies that have taken strong editorial positions on climate change in light of the overwhelming scientific consensus on the matter. The fact that virtually every science academy, from nearly every industrialized nation on earth, is sounding the alarm regarding anthropogenic climate change, is something the Editorial Board at EnviroNews, chooses not to ignore.

Along this same subject, a petition was launched online aiming to pressure the editorial boards of prominent newspapers to follow the lead of the LA Times and reject submissions for their letter sections that flatly ignore the science behind anthropogenic global warming. Titled, “Newspapers: Don’t Publish Climate Denial“, it has amassed over 27,000 signatures, and although released in 2012, is still live as far as we can tell. Perhaps as the sea level rises faster and faster, more prominent news publications around the globe will step up and take stronger editorial stances on the rapidly unfolding climate crisis. That remains to be seen.