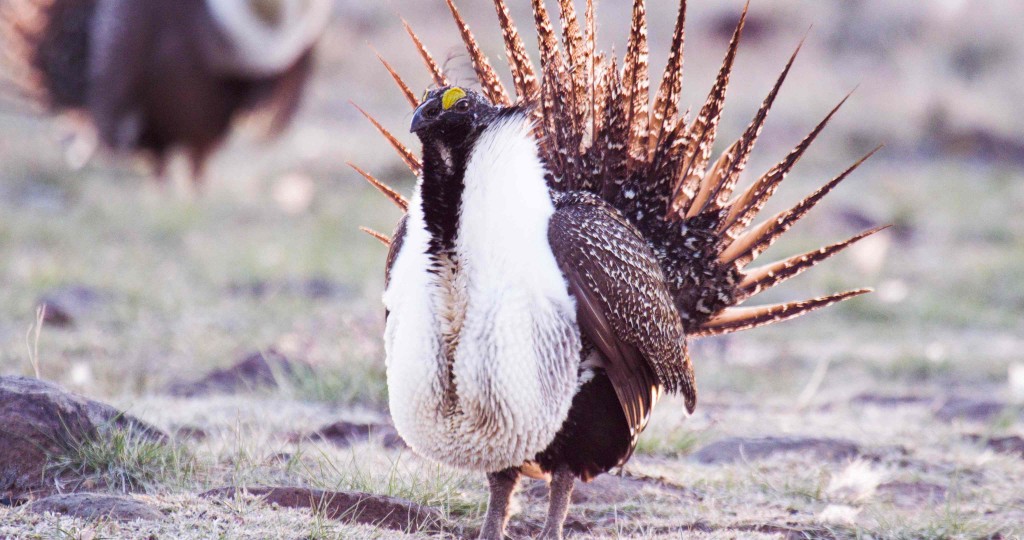 A decision by U.S. Fish and Wildlife Service (USFWS), an ancillary arm of DOI, had been court ordered by Sept. 30 of this year, and was surely one of the most anticipated wildlife announcements in U.S. history — and it will surely go down as one of the most controversial as well, following a 15-year-long political and ecological battle of unprecedented scale.

Jewell posted a produced and narrated video featuring multiple clips from Cornel Lab on DOI’s Facebook page saying, “Thanks to the largest land conservation effort in U.S. history, the greater sage grouse does not need protection under the Endangered Species Act.” The Secretary later followed up with an announcement at the Rocky Mountain Arsenal National Wildlife Refuge Visitor Center near Boulder, Colorado with Colorado Governor John Hickenlooper.

Posted by U.S. Department of the Interior on Tuesday, September 22, 2015

While the mainstream media will almost certainly buy into this “conservation success story” hook, line and sinker, many scientists, conservationists and environmentalists do not agree with that position at all. While Jewell pumped up a celebration with Colorado’s governor to a cherry-picked crowd and media-pool on one hand — biologists, wildlife advocates and environmentalists alike were fuming mad on the other.

Several biologists have iterated to EnviroNews that in many places, populations remain deep within the extinction vortex with no data demonstrating a recovery whatsoever — despite conservation efforts.

EnviroNews Wyoming spoke with Erik Molvar, biologist for WildEarth Guardians, this past April, in reference to DOI’s decision to not list the bi state sage grouse — a distinct subspecies of the greater sage grouse located exclusively in Nevada and California — Molvar called that “conservation success” story “window dressing.”

Regarding DOI’s announcement last April to not list the bi state grouse, many insiders we spoke to saw this merely as a practice round — a warm up if you will, that greased the wheel for the larger decision on the greater sage grouse, handed down today by Sec. Jewell in Colorado.
Greasing the Wheel: Sec. Jewell Pumps Up a ‘Conservation Success’ on Bi State Sage Grouse in April

Environmental groups have in the past chastised “conservation” and “treatment” efforts carried out by the Sage Grouse Initiative (SGI) and other working groups, saying these activities often sacrifice one ecosystem for another — while creating even more grazing habitat for ranchers.

Additional criticisms say there is little proof these voluntary efforts are leading to any real increases in sage grouse numbers. Still, nearly three-quarters of a billion dollars has been allocated for these programs — money critics say is used by the largest culprits to wet their own beaks — with little transparency.

When discussing culprits guilty of sage grouse habitat destruction, few, if any, can be placed above the ranching sector, which has been perpetuating chronic habitat degradation throughout the West in the name of hamburgers since settlements began. Interestingly, at the core of most of these working-group conservation efforts, slapped with a good-steward-of-the-land smiley-face, are the ranchers themselves — dipping their paws continually into the massive federal-fund cookie jar, available to them for the execution of the programs. Many of these “conservation efforts” involve hacking down old-growth junipers and pinyon trees and planting sage brush and other seed mix in these areas instead. There are entire Native American groups on Facebook dedicated to stopping this practice — a “treatment” they see as a desecration of a sacred food source — the pine nut.

It’s not only infringement by all the aforementioned parties that is giving grouse habitat a beating, it’s also climate change and drought-driven fires, infringement of invasive plant species like cheat grass that choke out understory and native vegetation, and the rampant spread of West Nile virus.

West Nile wreaked havoc on populations in the bird’s greatest stronghold in the Powder River Basin in Wyoming, but that problem was vastly exacerbated by a landscape littered with wastewater ponds from coalbed methane wells — an experiment that largely went bust in the area, leaving thousands of toxic wastewater ponds that have created the perfect breeding grounds for mosquitos wielding the deadly virus. This problem, and the others mentioned above, has not been solved in most grouse areas, leaving the workings for a perfect storm of sage grouse destruction. Still, according to USFWS, the threat is not grave enough to warrant federal protection.

Considering the sheer magnitude of the battle surrounding the imperiled bird, one might ask: what are all the ruffled feathers about? Why spend all this money and put all these efforts into a bird? And why this bird in particular?

Other ESA protections of bird species, like the ferruginous hawk (in Wyoming), have led to the implementation of buffer zones as large as three radial miles — set up around nests for months at a time to protect nesting and other activities. During these periods drilling, blasting, mining, grazing and other disturbing activities are often ordered to halt.

The greater sage grouse has been referred to by biologists as a “lynchpin species.” It is integrally bound to the “sage brush sea,” spanning 11 states, at a very deep ecological level. It is hard to imagine the activities of oil, gas, coal, mining and grazing in the West, shut down across vast stretches for three or four months every year, anywhere near a sage grouse breeding lek — but that is exactly the threat that all the aforementioned sectors faced with an ESA listing of the sage grouse. That little bird could have shut down their activities across the West on a large scale for about a quarter of the year, costing developers billions — but as of today, industry will no longer have to worry about the sage grouse monkeywrenching its activities.

Since EnviroNews began covering the sage grouse saga several years ago, we have yet to speak with a knowledgable correspondent on the inside track that seriously believed USFWS would ever list the bird for any level of protection. We’ve repeatedly heard that industry and political pressure would simply be insurmountable for USFWS in this instance. Katie Fite, biologist and board secretary with the Idaho-based Defenders for Wildlife told EnviroNews in April it was unlikely that DOI had the “backbone” to list bird under the relentless lobby of industry and continued political pressure.

It is supposed to be biology, not politics or special interest ploys, that determine whether a species receives protection or not under the ESA. In the murky fog of battle surrounding Centrocercus urophasianu, one is left to wonder about the myriad elements that may have factored into DOI’s decision. Was it really based entirely on biology and “sound science” like it’s supposed to be?

With that said, it must also be noted that the struggle is still likely far from over and will probably land USFWS in a Wild West shootout in court, as several groups have indicated they may sue over the decision — and lawsuits of this nature have resulted in species being listed in the past.

WildEarth Guardians and Centers for Biological Diversity are credited by many for being ultimately responsible for hundreds of the species that we see protected under ESA today — but that didn’t come without 85 lawsuits and legal actions against USFWS, that went on for years. When the smoke settled in that legal mega-war, USFWS agreed to list 779 species to ESA as part of a game-changing settlement.

Both WildEarth Guardians and Centers for Biological Diversity have been very active on the sage grouse issue for years, and lawsuits do seem likely. Still, if litigation does happen, how long will it last, and what does the future hold for the flamboyant, dancing, greater sage grouse in the interim — in a western landscape fast disappearing at the hands of ranching, mining, energy and real estate?