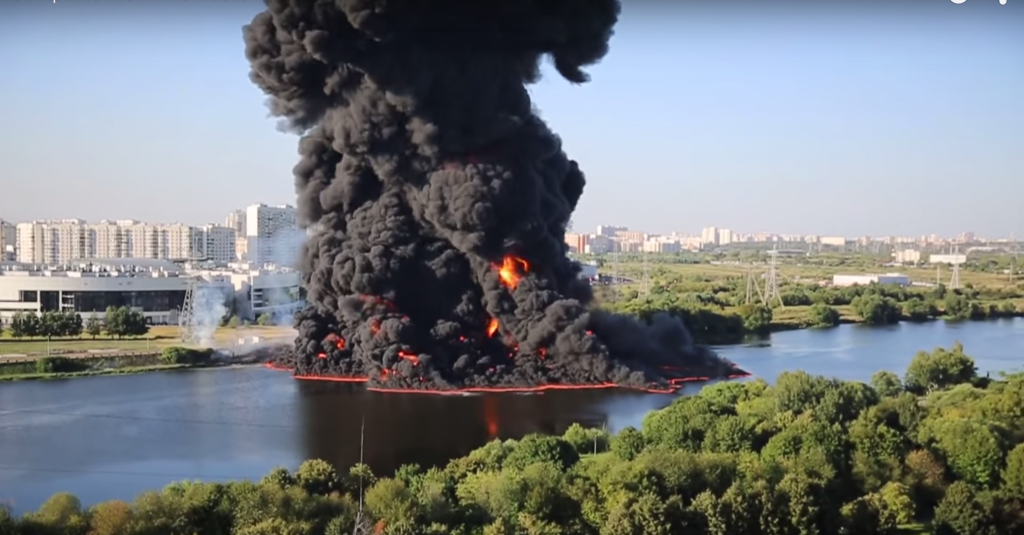 (EnviroNews World News) — Moscow, Russia — Take a look at the dramatic videos in this article and witness giant black pillars of smoke, billowing 300 feet into Moscow’s air, while below on the Moskva River, a fuel-fed fire burns red-hot on the water’s surface.

The explosion occurred not far from the site of an oil refinery. Reports from the ground suggest jet fuel and kerosene began spilling from a crack in an underwater pipeline, and rescue workers said the leaking hydrocarbons sparked after a nearby grass fire reached the spill. The fire could be seen from more than nine miles away in Red Square.

According to Sputnik News, a representative of Transneft said an accident on its pipeline had occurred and they had to stop pumping oil products through it.

State-owned Transneft is the largest pipeline company on the planet, and said the incident did not pose a threat to the nearby refinery. Gazprom, Russia’s other massive state-owned oil operator, denied any involvement in Wednesday’s episode.

Some residents reported hearing an explosion prior to the fire. Fortunately, no one was fatally injured, just a few bystanders—two residents and a nine-year-old child were taken to a nearby medical facility to be treated for smoke inhalation.