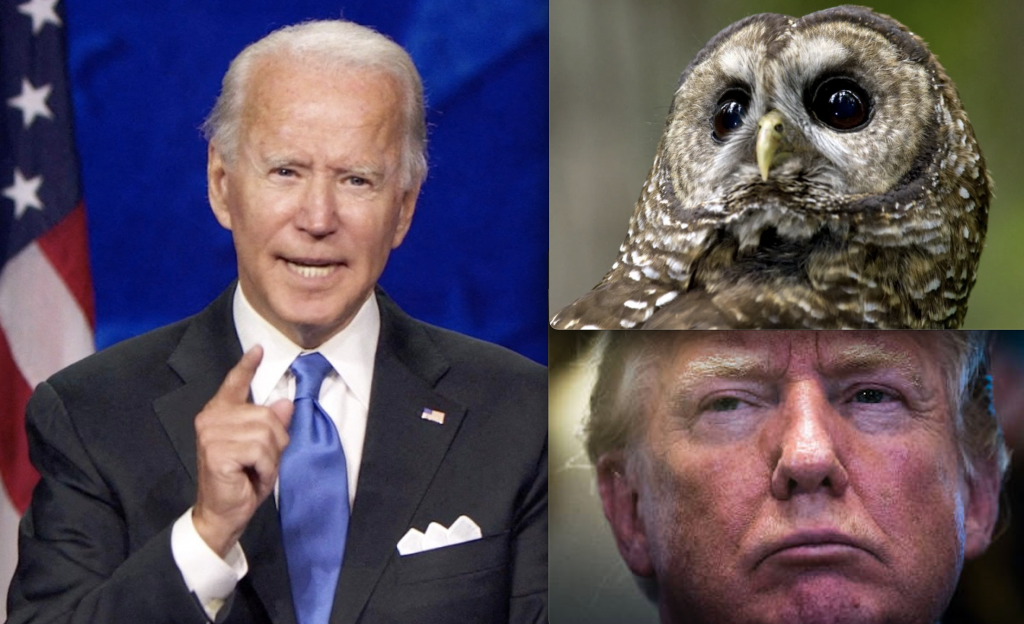 (EnviroNews Nature) — Washington D.C. — As of March 1, 2021, the U.S. Fish and Wildlife Service (USFWS) is delaying the implementation of a final rule crafted at the end of Trump’s term until April 30, 2021. The rule-change, if it remains in place, will slash the northern spotted owl’s (Strix occidentalis caurina) critical habitat under the Endangered Species Act (ESA) by 3.4 million acres – a rollback that left wildlife advocates stunned. The USFWS is also opening up comments on the rule to help determine whether further delay is necessary.

The rule came about after the Trump Administration created a gaping loophole in the ESA itself by gutting one of its critical underpinnings; the alteration allowed economic considerations from industry to be factored into species listing decisions for the very first time – something Congress expressly forbade in 1982. As reported by EnviroNews, the northern spotted owl was the first species to fall victim to that shakeup of the ESA.

Originally published with a date of Jan. 15, 2021, the northern spotted owl rule excluded approximately 3,472,064 acres in Washington, Oregon, and California from protection under the ESA and caused outrage among conservationists, as did a host of other anti-environmental rules passed by Trump in his final days in office. Now, NGOs are celebrating the USFWS’ decision to revisit the rule and open it for comment.

“The northern spotted owl stands on the brink of extinction, so this is really encouraging news,” Ryan Shannon, staff attorney at the Center for Biological Diversity (the Center), said in an email to the press. “We’re thrilled to see the Biden Administration begin to undo Trump officials’ last-minute, ill-conceived and unsupported rollback of critical habitat protections for the species.”

In part, the Center attributes the opening of comments and the delay to the notice of intent to sue issued by conservation NGOs, including the Center itself and Earthjustice. The lawsuit to overturn the rule is moving forward but might not make it to the courts if Biden’s Interior Department backs down.

Conservation groups weren’t the only ones to address the rule and its issues. On Feb. 2, 2021, Oregon Senators Ron Wyden and Jeff Merkley, were also involved in changing the direction of USFWS’ decision. As part of a coalition of eight western Democrats, they issued a letter asking for an immediate review of the policy:

The decision to strip these critical habitat protections is as bewildering as it is damaging. Last year, the USFWS initially proposed removing only roughly 200,000 acres of protected habitat and just last month, the agency determined that uplisting the spotted owl to endangered species status was “warranted but precluded” by higher priority actions. Apparently, those higher priority actions include ensuring the extinction of the species through the destruction of over 3.4 million acres of its critical habitat.

The letter went on to deride the “malfeasance by the Trump Administration’s political leadership at the [Department of Interior]” and the ethical scandals the Department was “mired in” during David Bernhardt’s brief tenure. Senators Dianne Feinstein (D-CA), Patty Murray (D-WA), and Maria Cantwell (D-WA), and Representatives Earl Blumenauer (D-OR), Raul Grijalva (D-AZ), and Jared Huffman (D-CA) were the others who also signed the letter.

The USFWS recognizes “the current level of survey coverage and effort are insufficient to produce reliable population estimates” and in 1994, there were an estimated 7.4 million acres of suitable habitat for the owl on federal lands. That number has declined by about two percent per year. The primary threat to the northern spotted owl at the time of its listing as threatened was loss and adverse modification of suitable habitat as a result of timber harvesting.

The bird also faces threats from competition with the barred owl (Strix varia) – an invasive species, and “fire in the relatively dry East Cascades and Klamath provinces of California and Oregon as greater threats than previously considered.”

Because of the bird’s need for old-growth forests, it has been part of contentious conservation battles dating back to the late 1980s and early 1990s; the logging industry has been the owl’s main opponent and has fought against regulations protecting its habitats.

(EnviroNews Oregon) – Toward the end of Donald Trump’s first (and last) term, his administration made a handful of monumental slashes to the Endangered Species Act, removing several fundamental underpinnings of the 50-year-old, overwhelmingly popular, bedrock legislation. As reported by EnviroNews, one of those rollbacks allowed economic concerns from…

Trump Nukes Environmental, Health, Endangered Wildlife Protections on His Way out the Door

(EnviroNews DC News Bureau/EnviroNews Nature) – While the door on Trump’s official authority may be closing quickly, his administration is still working feverishly to entrench his “anti-nature,” pro-business development agenda throughout the U.S. Government. Opponents say Trump has done everything he can to leave behind a legacy that…