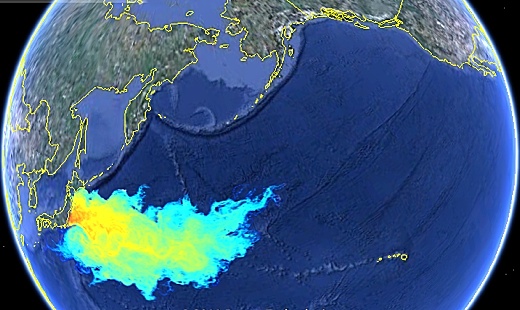 (EnviroNews DC News Bureau) — “It is not a question any more: radiation produces cancer, and the evidence is good all the way down to the lowest doses,” says the late Dr. John Gofman, Professor Emeritus at the University of California, Berkley, in the book Nuclear Witnesses: Insiders Speak Out.

On December 12, 2016, EnviroNews USA’s own Editor-in-Chief Emerson Urry touched off a firestorm with his news article titled, “It’s Finally Here: Radioactive Plume From Fukushima Makes Landfall on America’s West Coast,” which claimed “medical science and epidemiological studies have demonstrated time and again that there is no safe amount of radiation for a living organism to be subjected to — period.”

In his piece, Urry also exposed other news agencies like NBC, the New York Post, USA Today and The Inquisitr, catching them with their pants down, in the act of repeating the false assertions of the U.S. and Canadian researchers, telling people not to worry about the recently detected low amounts of cesium 134 found in salmon, and that the levels were within “safe” or “accepted” thresholds for human health. [EDITOR’S NOTE: Emerson Urry recused himself from all editorial duties on this news story.]

Thom Hartmann picked up the article by Urry and read it on his show. Then Hartmann offered up his own journalistic explanation on how radiation works, and addressed the problem with the proclamation that there is a “safe” level of radiation to consume or be exposed to.

“As the element is decaying it is throwing off radiation, and the radiation, if it hits the DNA in the nucleolus and the nucleus of a cell, can alter that DNA in ways that can produce things like cancer,” Hartmann said. “Now it can also cause simply the cell to die or it can mutate the cell in all kinds of other weird ways, and so it’s kind of a numbers game. If you irradiate a million cells… you might get two or three that become cancerous. That’s all it takes, right? You’ve got cancer,” Hartmann continued in his video report. “The cesium could cause no cancer, or it could cause cancer in the first cell it irradiates. To say that there is a safe level of radiation is frankly wrong. It’s just wrong.”

Urry said later in a statement, “It’s one thing for the media to regurgitate trivial facts on trivial matters, but to blindly repeat that consuming low levels of radiation is ‘safe,’ is irresponsible reporting and borders on dangerous. News editors should take care to do their due diligence on a matter as serious as leading readers to believe consuming any amount of radiation is ‘safe’ when medical science and epidemiology, dating back 50 years to the present, have demonstrated repeatedly that that’s just not true. Even the smallest exposures increase the risk of cancer to the subject.”

According to the Agency for Toxic Substances and Disease Registry’s (ATSDR) report titled, “Public Health Statement for Cesium” from 2004, “stable and radioactive cesium can enter your body from the food you eat or the water you drink, from the air you breathe, or from contact with your skin. When you eat, drink, breathe, or touch things containing cesium compounds that can easily be dissolved in water, cesium enters your blood and is carried to all parts of your body… No known taste or odor is associated with cesium compounds.”

Cesium is similar enough to potassium that it can fool the body. This results in its bioaccumulation. When cesium enters the biological system of a fish, which is then eaten by a larger fish, the larger fish becomes contaminated. As the larger fish eats more, it becomes more contaminated. The cesium accumulates in its body. When a person eats that fish, he or she also ingests the cesium that hasn’t decayed or been excreted. The more seafood that person eats, the more radioactive material he or she will be exposed to.

The researchers who discovered the cesium recently also made the mistake of equating the dangers of consuming seaborne isotopes to that of receiving an x-ray, missing the point entirely that ingested or inhaled “internal particle emitters” are known to be especially hazardous.

“Consuming food containing radionuclides is particularly dangerous. If an individual ingests or inhales a radioactive particle, it continues to irradiate the body as long as it remains radioactive and stays in the body,” said Dr. Alan Lockwood, MD in an article on Fox News Health.

“Children are much more susceptible to the effects of radiation and stand a much greater chance of developing cancer than adults,” said Andrew Kanter, MD, President of the Board for Physicians for Social Responsibility (PSR) in that same Fox News Health article. “So it is particularly dangerous when they consume radioactive food or water.”

Those who might expect the government to protect them from contamination by radiation have only to look at the downwinder situation in Utah or the consequences of Gofman’s research in the late 1960s. According to Gofman’s obituary in the L.A. Times, “Gofman and his colleague at Lawrence Livermore National Laboratory, Arthur R. Tamplin, developed data in 1969 showing that the risk from low doses of radiation was 20 times higher than stated by the government. Their publication of the data, despite strong efforts to censor it, led them to lose virtually all of their research funding and, eventually, their positions at the government laboratory.” Their conclusions were for the most part, later validated.

“There is no safe level of radionuclide exposure, whether from food, water or other sources, period,” said Jeff Patterson, DO, immediate past President of PSR, in late March of 2011 in the immediate aftermath of the meltdowns. “Exposure to radionuclides, such as iodine 131 and cesium 137, increases the incidence of cancer. For this reason, every effort must be taken to minimize the radionuclide content in food and water.”

“There is no safe dose of radiation,” says Prof. Edward P. Radford, Physician and Epidemiologist as quoted by GreenMedInfo.

In an email to EnviroNews, nuclear expert Arnie Gundersen said Japan had raised the maximum allowable exposure by 20 times the previous number for civilians to be able to return to their homes. The U.S. and the EPA have considered such plans in the case of a nuclear accident. In food, the U.S. has an allowable dosage of radiation that is 12 times what Japan allows.

“Corporations get the benefit, civilians take the risk,” Gundersen wrote.

While Urry and Hartmann have sounded the alarm, there remain unanswered questions that desperately need to be resolved. Who will clean up the contamination in the food chain? How much radiation exposure will governments continue to say is safe in spite of the medical research? How can people trust what’s on their plate and in their corporate owned media?

EDITOR’S NOTE: This article has been amended to reflect the fact that Gofman did not write the book “Nuclear Witnesses: Insiders Speak Out.”