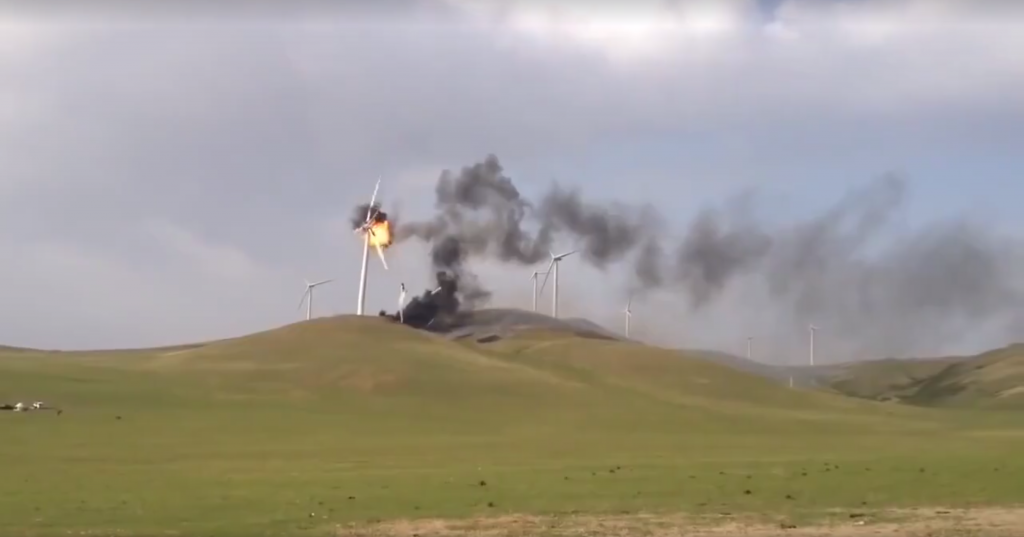 (EnviroNews World News) — A video has been going viral on Facebook, racking up nearly six million views so far, of a massive wind turbine exploding, catching fire, and crashing and burning to earth, with a long seemingly slow-motion tumble — like a mighty giant falling slowly to the ground. The dramatic video has paved the way for thousands of comments from myriad angles and viewpoints.

While many in the surrounding blog appear to be proponents of wind and green power as a whole, others criticize the energy form for being too unreliable, and for not working when the wind is blowing either too hard, or not hard enough. Many others who weighed in on the video are clearly outraged over the volume of large raptors and other birds falling victim to wind power’s behemoth bladed beasts every year.

You don't see that everyday

While it is true more wind energy has been steadily coming online around the world every year, many say conventional technology is reaching its limits. In addition to the aforementioned concerns, some experts say wind is still not very economical and that conventional turbines don’t offer a reasonable payback time for investors — while others point to the logistical difficulties of first transporting, and then installing the towering giants on many windy locations.

As wild as it may seem to witness a massive wind turbine worth seven-figures burst into flames and smash into the earth, it’s not all that uncommon. In the course of our research, we found many videos from around the web of such episodes — of which many where due to mechanical failures from turbines spinning too fast in high wind conditions.

So, is there a solution to make wind energy more reliable, cheaper, and safer for birds — all in one stroke? Some innovators are saying, “yes.”

BLADE-LESS WIND TURBINES: ARE THEY REALITY?

While wind might not be a perfectly reliable source of energy today, let’s face it, continuing to burn fossil fuels as fast and furiously as possible, will result in an unreliable, destabilized climate tomorrow.

That’s why some companies, like Spain-based Vortex Bladeless, are innovating new turbines that have no blades at all, don’t need to shut down when the wind is blowing too hard, and pose little risk to birds.

The in-the-works technology resembles a simple pole — a tall, skinny, fluid-filled, cylindrical turbine and oscillates and vibrates. When air moves over the device a vortex is created that gets the turbine going. The kinetic energy is then converted to electricity through a linear generator — similar to the ones used to harness wave energy.

The company admits the design doesn’t capture as much wind power per-acre as a conventional turbine, but also says what’s lost in efficiency, is compensated for by multiple other benefits the prototype has to offer.

According to its website, the company claims that by “conservative estimates” the blade-less design saves “53% in manufacturing costs and 51% in operating costs compared to conventional wind turbines” — all this, while eliminating the use of oil for lubrication, using fiberglass instead of metal, and requiring considerably less maintenance, according to the company.

Phil McKenna wrote for MIT Technology Review, “Vortex’s lightweight cylinder design has no gears or bearings. [CEO David] Yáñez says it will generate electricity for 40 percent less than the cost of power from conventional wind turbines” — without having to start up and shut down for out-of-range wind speeds — and without the risk to birds.

But many wind power enthusiasts are skeptical of blade-less concepts, saying they become less efficient as they get larger in size. Sheila Widnall, an aeronautics and astronautics professor at MIT said, “With very thin cylinders and very slow velocities you get singing telephone lines, an absolutely pure frequency or tone, but when the cylinder gets very big and wind gets very high, you get a range of frequencies. You won’t be able to get as much energy out of it as you want to because the oscillation is fundamentally turbulent.”

Windall says they’ll be noisy too — not silent like the company claims. Nevertheless, Vortex Bladeless is moving full steam ahead with what they say is a “noiseless” product that is more “respectful of nature.”

Lastly, engineers say harnessing wind for energy is reliant on “sweeping” as large an area as possible — something the Vortex Bladeless design is clearly not geared for (pun intended). Critics also point to multiple other failed companies that touted similar designs and made similar claims before going belly up.

So, is blade-less wind power technology commercially viable? Or is it a skinny pipe dream based thinly in reality (pun intended again)? EnviroNews will be watching this space very closely to see if Vortex Bladless, and others, are able to ramp up their production to any kind of industrial scale.