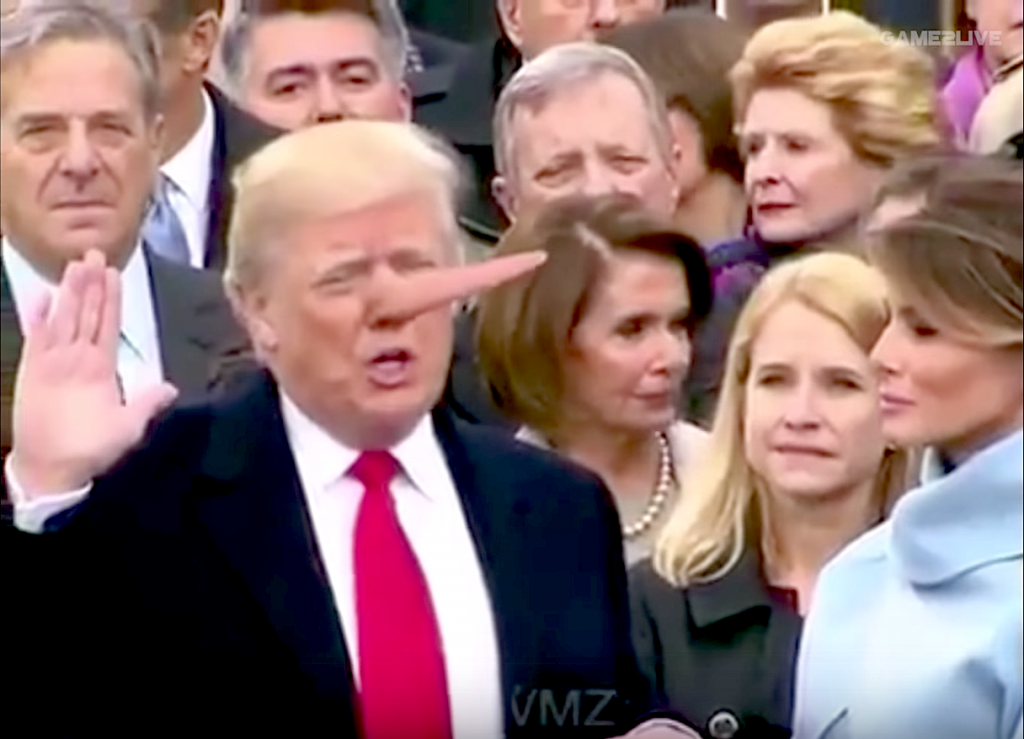 (EnviroNews DC News Bureau) — EDITORIAL: At a town hall meeting at the White House for CEOs and business leaders on April 4, 2017, President Donald J. Trump repeated a claim he’s been making a lot these days: “I have won awards on environmental protection” (of course he never tells anybody which ones). In response to this repeated assertion, the EnviroNews USA Editorial Board has issued a response: Bullshit! Here’s why:

Let it be known: it is not in the customary style of the EnviroNews USA Editorial Board to use a cuss word in response to statements made by the President of the United States (POTUS) — au contraire, not at all. We do our best to maintain respect and professionalism at all times. But a few fabrications flying freely from POTUS 45’s mouth these days are so far into left field (or maybe right field) that they simply must be called out for what they are: in this case, utter, nonsensical, horrendous horse pucky — plain and simple.

Under the bombardment of daily fantastical falsehoods flippantly flung by Trump, even respected hardline news companies have been forced to step out on a journalistically uncomfortable limb and use “the L word” — lie. But when it comes to the environment, the President is on EnviroNews‘ turf, and we now have little choice than to take it a step further. For Trump to suggest he is a champion of the environment is no small canard — we only wish there were a word stronger than “bullshit” to describe the depth of this deception.

Just this week, the Editorial Board of the LA Times felt compelled to release a scathing editorial titled, “Why Trump Lies” — a blistering opinion piece that attempts to rationalize why Trump says what he says. Amongst other interesting tidbits, the editorial stated:

He targets the darkness, anger and insecurity that hide in each of us and harnesses them for his own purposes. If one of his lies doesn’t work — well, then he lies about that… But he is not merely amusing. He is dangerous. His choice of falsehoods and his method of spewing them — often in tweets, as if he spent his days and nights glued to his bedside radio and was periodically set off by some drivel uttered by a talk show host who repeated something he’d read on some fringe blog — are a clue to Trump’s thought processes and perhaps his lack of agency. He gives every indication that he is as much the gullible tool of liars as he is the liar in chief.

But back to this particular lie: environmental awards. It’s not only the opinion of The Editors of this publication that Trump is no environmental superstar, it’s been the position of multiple news pieces, from numerous prominent organizations. Other media outlets and several top-tier fact-checking organizations have attempted to put truth to the President’s claims of environmentalism as well, without any success. In a piece titled, “Trump’s unsupported claim he has ‘received awards on the environment,'” the Washington Posts reports:

EnviroNews concurs with the Washington Post‘s assessment, as we haven’t been able to find any evidence of Trump’s purported environmental home runs either. Regarding a Trump speech in Scotland over an environmentally controversial golf course project, the conservative Wall Street Journal reported:

“I would consider myself an environmentalist in the true sense of the word,” Mr. Trump said, a comment that drew so much laughter from the public gallery that the inquiry chairman had to call for order.

At least the Scottish people have the wherewithal to see through Trump’s environmental con and call a spade a spade, in this case, by laughing straight in his face — something American crowds still apparently lack the chutzpah to do.

One of Donald Trump’s very first orders of business as POTUS was removing any and all mentions of climate change on the White House website. Is that “environmental protection?” The President should stop taking the American people for fools.

Within the first days of his presidency, Trump signed bills that allow coal companies to dump toxic byproducts into waterways and transnational oil companies to conduct business with foreign powers under the cloak of darkness, while rolling back flaring and venting rules for the oilfield.

With one of his very first strokes of the pen in the Oval Office, Trump paved a path for the continuance and completion of both the Keystone XL and Dakota Access (DAPL) oil pipelines — projects the Obama Administration had halted under extreme public pressure — and projects Donald Trump has been a shareholder in as recently as last summer. While Trump spokespeople have claimed the President has dumped his stock in these projects, no one really knows for sure because he still refuses to disclose his tax returns.

Just this week, he signed yet another sweeping executive order titled, “Enforcing the Regulatory Reform Agenda” — a move that aims to loosen rules on controversial pesticides as well as air and water pollution. Also this week, in quiet fashion, Trump signed House Joint Resolution 69 (HJR 69) into law, rescinding the Alaska National Wildlife Refuges Rule and enabling the hunting of bears with cubs, and wolves with pups in their dens, in the state of Alaska.

Furthermore, Trump seems to have an obsession with coal, senselessly spewing the catch-phrase “clean coal” an uncountable number of times from the campaign stump and now as President, when in essence, no such thing exists for practical purposes in the real world. Clean coal, although cool sounding, has been a non-reality, with only one facility in the United States even producing electricity from any such technique. The two technologies used to produce “clean coal” power have simply proven too energy intensive to be economically viable in the marketplace. Where is this magically mysterious “clean coal” the President keeps speaking about? Answer: It is nowhere. So, how much longer will the President keep up his clean coal con before anyone in the Russia-mesmerized mainstream media calls him out on it?

From the stump in May 2016, Trump said, ““We’re going to get those miners back to work… The miners of West Virginia and Pennsylvania… Ohio and all over are going to start to work again, believe me. They are going to be proud again to be miners.” On the other hand, EnviroNews can find little at all that Trump has said regarding what he would do to help the renewable energy sector create jobs.

The President is a climate denying, coal loving, oil oligarch pandering, pipeline perpetuating, nuclear supporting petrochemical lover — and he should simply and proudly declare himself as such, and stop insulting everyone’s intelligence with the I’m an “environmentalist” bullshit (there’s that little politically incorrect word again). He did actually say that in an interview with Fox and Friends in 2011: “I’ve actually been called an environmentalist, if you can believe that.” (Um no, we can’t believe it.) But it doesn’t just stop there.

Let’s make one thing clear in relation to Mr. Trump’s business ventures: golf courses might look green to the eye, but they are in no way green for the environment. On the contrary, the opposite is true. Your typical golf course utilizes an ungodly volume of water, pumps chemical fertilizers into the ground, and creates an impediment to the naturally occurring ecosystem and wildlife — all while making lots of cash for the owner. Golf courses, constructed in environmentally idiotic locations like Palm Springs, California in the 130-degree Mojave Desert, consume even more water than courses in wet places like Florida or Washington State, while draining precious H2O resources like Mono Lake — all so humans can play a game (sorry golfers, sometimes the truth hurts).

On another topic, your friendly, neighborhood, sky-scraping Trump tower is far from an environmentally benign endeavor either, and in Trump’s case, with all the Chinese steel he’s used, manufactured with scant environmental rules or oversight, it’s not very friendly to the U.S. economy either.

Frankly, for Trump to call himself an “environmentalist” could be considered blasphemy — at least if you’re from the school that considers Great Nature a sacred sanctuary. It is the hope of the EnviroNews USA Editorial Board that the President will stop with the ridiculous “environmental protection” claims and just give everybody a break already.