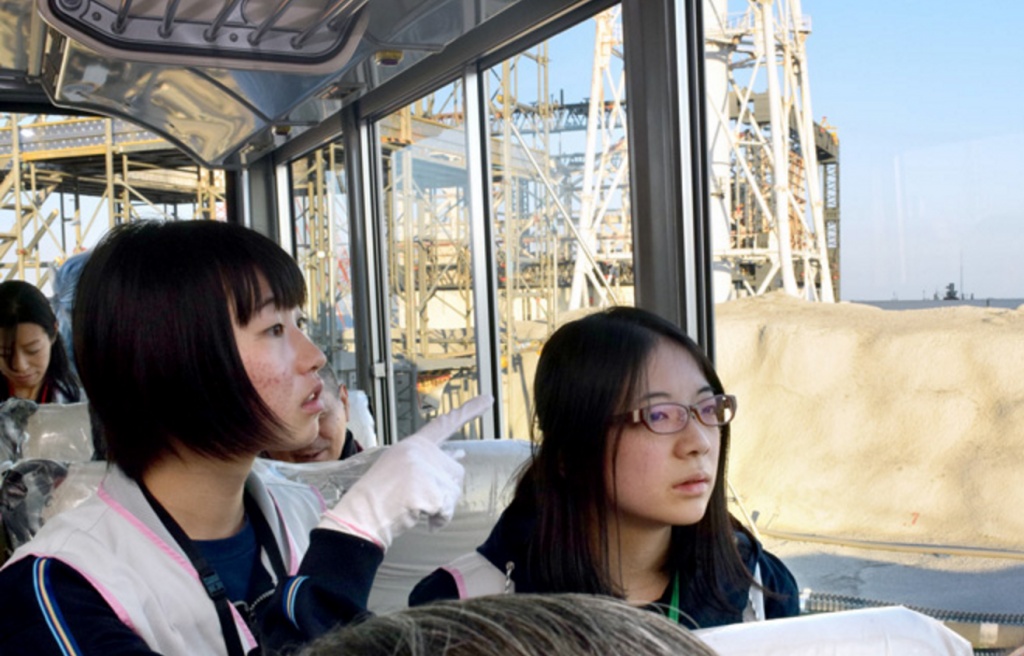 (EnviroNews World News) — EDITORIAL: On November 18, 2016, Tokyo Electric Power Company, a.k.a. TECPCO, took a group of 13 students wearing dosimeters from Fukushima High School into the exclusion zone around the hobbled Fukushima Daiichi Power Plant for an educational tour. It is the opinion of the EnviroNews World News Editorial Board that this is unacceptable, and should not happen again until all radiation is cleaned up at the site.

The Asahi Shimbun reported, “It was the first tour by youngsters since the disaster as plant operator Tokyo Electric Power Co. had deemed the radiation risk was too high.”

To be clear, epidemiology and medical science have firmly established there is no “safe” amount of radiation to be exposed to — period — end of story. With each subsequent exposure, no matter how small, the bombarded organism experiences an increase in cancer risk.

Knowing that science has firmly established that there is no “safe” limit of radiation to be exposed to, it is the opinion of the EnviroNews World News Editorial Board that TEPCO should be ashamed of itself for taking a class of high school students into the still radioactive exclusion zone around the crippled power plant as part of what has been a continuous damage control campaign since the accident’s inception. Furthermore, TEPCO should apologize to the families, and commit publicly to not take any more children into the exclusion zone until all radioactivity has been removed.

The exclusion zone around the demolished Fukushima Daiichi power plant is a dangerous place. But when a person goes there, the invisible dangers that lurk don’t threaten to kill or maim right away — the hazardous radioactive rays and particles around Fukushima threaten to kill or harm them at some point years down the road — and those same radioactive exposures can also predispose and mutate their unborn children and grandchildren with birth defects, disease and cancer.

The gestation period of cancers from radiation ranges from as low as four years, to as high as fifty years or more. If an 80-year-old person is exposed to radioactivity, it is likely that other causes, either natural or unnatural, will lead to their demise before maladies caused by radiation will. However, for a very young person subjected to radioactivity, this is not the case, and for this reason, again, TEPCO should be ashamed of itself for taking children who may want to later have children themselves, into the exclusion zone for a publicity stunt. A physical trip to the location is not necessary to educate youth about the Fukushima accident, or nuclear power in general. To make a physical trip to the site with children is highly irresponsible. Less risky means of education must be used instead.

To suggest that TEPCO has been engaging in a continuous campaign of damage control and coverup is not a stretch at all. Earlier this year, TEPCO finally confessed publicly that it lied to the press and the entire world immediately following the meltdowns, downplaying the severity, and not admitting full meltdowns had occurred until several months later, when in fact, the company knew within hours that meltdowns were underway. This blatant lie put many thousands at risk and hampered evacuation strategies. Shortly after the company’s admission, former TEPCO Chairman Tsunehisa Katsumata, and two former Vice Presidents, Sakae Muto and Ichiro Takekuro were indicted for “professional negligence resulting in deaths and injury.”

Japan as a country, also has a serious PR problem with the ongoing Fukushima crisis — and that PR issue translates into economic problems, hence, Japan has done anything possible to slap a happy face on the disaster from the get-go.

Though it’s possible to display many examples of this, the country’s fervent and costly effort to host the 2020 Olympics, despite many concerns about Fukushima from the international community, may be the grandest.

Japan has done much to stifle and stymie the voices of anti-nuclear protestors, while maintaining everything is “under control” at the rubbled plant. Nothing could be further from the truth.

It is the opinion of the EnviroNews World News Editorial Board that TEPCO, and the Japanese government, should come fully clean, relinquish their pridefulness, and engage the international community for help in the cleanup effort.

FUKUSHIMA: A SPEWING NUCLEAR DRAGON STILL ON THE LOOSE

To be clear on another point: the crisis at Fukushima Daiichi is in no way under control — quite the opposite. It is still out of control in many regards. For example, the radioactive waste water pileup problem at Fukushima is beyond critical, as over 1,100 massive storage tanks have engulfed nearly the entire area, filling the crumpled nuke site to the brim with deadly radioactive water. The operator has on multiple occasions had to discharge large amounts of tainted H2O out to sea. Secondly on this point is the fact that deadly uranium and plutonium contaminated water have been leaching into the ocean from under the reactor buildings on a continuous basis due to groundwater seepage.

Japan is a country that has been torn to shreds by radiation poisoning, possibly more than any other. Furthermore, Japan is one of only a couple dozen or so nations on earth suffering population decline, but scarily, Japan’s population is starting to contract at an alarming speed due to a low birth rate. The last thing organizations need to be doing is risking the genetic integrity and fertility of Japan’s youths by taking them to nuclear meltdown ground zeros. TEPCO should hang its head in front of the media, apologize, and agree to engage in no further publicity stunts that endanger the country’s children.

NUCLEAR COMPANIES SHOULD BE LIMITED, OR KEPT OUT OF SCHOOL-BASED NUCLEAR EDUCATION ENTIRELY

On another relevant topic, EnviroNews has long taken issue with nuclear companies being invited to participate in the educational process on nuclear issues, as our research has shown that children’s opinions are easily swayed when “educated” on the topic by nuclear companies. Many of the campaigns we’ve seen represent borderline indoctrination on the pros of nuclear power, while typically failing to mention catastrophes and the practically boundless risks and uncleaned waste sites still plaguing the planet today. Teachers and administrators should use more discretion on a topic as controversial as nuclear, and recognize that the industry’s propaganda campaigns know no boundaries.

One of many examples of these industry-driven “nukewashing” campaigns was witnessed by EnviroNews when EnergySolutions, a nuclear waste disposal company stationed in Utah, “educated” a class of students in Salt Lake City about the “benefits” of radiation. Before the event around three-quarters of the class was opposed to nuclear energy, but when surveyed again after EnergySolutions was finished, around three-quarters of the students had changed their stance to a pro-nuclear position. Naturally, the teacher failed to bring in an educator from any anti-nuclear groups who would paint a different picture entirely. Sadly, the U.S. Government, via the Department of Energy (DOE), has also gotten involved in the nukewashing with a curriculum based program called, the Harnessed Atom.

With that stated, it is the further opinion of the EnviroNews World News Editorial Board that nuclear companies should be kept out of the educational process on nuclear issues entirely — or at least limited to situations where anti-nuke organizations are allowed to present opposing views on the dangers and downsides of nuclear simultaneously.

“The tour made me realize that we should arm ourselves with accurate information if we want to change people’s perceptions of Fukushima as a scary place,” said Keika Kobiyama, a first-year student in the Fukushima High School tour group. Sadly Keika, the leaking radioactive nightmare at Fukushima Daiichi is still a very “scary place,” and should be recognized as such — and if TEPCO told you otherwise, the company is, well, full of radioactive crap.