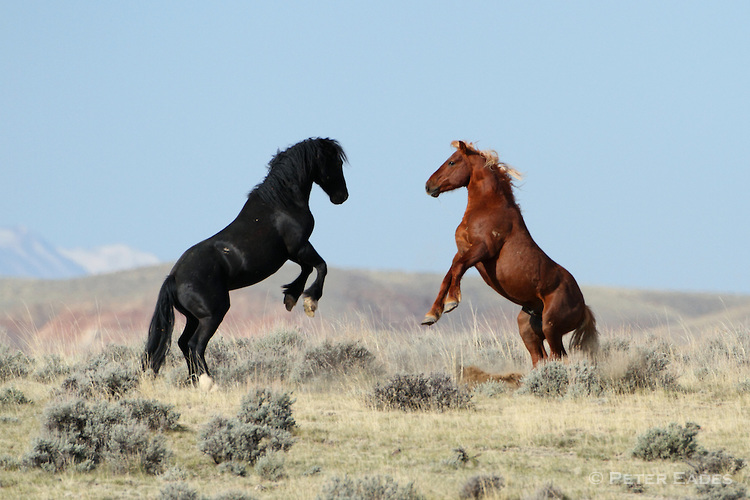 (EnviroNews Nature) The Humane Society referred to it as “cruel” and a “complete abdication of responsibility.” That was the tone of the countless criticisms used to describe the advice from a third party advisory panel of the Bureau of Land Management (BLM) to send some 45,000 wild horses (Equus ferus caballus) and burros to the slaughterhouse. That recommendation came down on Friday September 9, 2016, but the government has already apparently changed its mind, and announced Wednesday, that it won’t be sending the animals to their demise after all — this, after the board’s decision set off a firestorm.

The animal activism website The Dodo commenced its writeup on the news this way: “A government board just recommended that 45,000 wild horses and burros be killed to make room for beef mega farms — and you’re about to pay for it.”

The Humane Society wrote on its website, “Animal rights activists are up in arms after a panel of experts advised the federal government to euthanize more than 45,000 wild horses as a cruel cost-cutting measure for the beleaguered Bureau of Land Management.”

After the National Wild Horse and Burro Advisory Board, a panel of over 30 “civilian experts,” made the recommendation, headlines like, “Animal rights outcry after experts tell U.S. government to euthanize 45,000 wild horses,” rang out across the country, spotlighting the outrage felt in the animal rights community.

The Humane Society released another blog piece titled, “Feds must dismiss unhinged advice on wild horses” — and the feds did just that.

Although the BLM hasn’t officially responded to the board yet, Tom Gorey, a spokesman for the Bureau, told Reuters in an email that the BLM plans to “continue its current policy of caring for unadopted or unsold wild horses and burros” and will “not sell or send any animals to slaughter.”

The agency has been in a wild horse management conundrum for many years, struggling to hold down the herds to a number it deems appropriate for the terrain. But not everyone agrees on what that number should be.

27,000 — that’s the number the federal government wants, and the amount the BLM says would keep overgrazing in check, while preserving the land. But the number roaming the West is somewhere around 67,000. Those specimens are located mostly in Nevada and California the agency says, but herds can also be found in Arizona, Colorado, Idaho, Montana, New Mexico, Oregon, Utah and Wyoming.

But many say that number of 67,000 is peanuts compared to what it could be — or should be. Wild horse proponents argue that two million of the iconic creatures roamed the West back in 1900, and say the BLM lopsidedly favors cattle grazing when it determines what appropriate Herd Management Areas (HMA) are.

There are about 270 of those HMAs scattered across the 10 states harboring the horse, and the BLM says those areas are already too crowded. On the flip-side, horse-huggers say cattle outnumber wild horses 50-1 on the range — a statistic they say is badly skewed to say the least.

While the BLM releases videos and interviews demonstrating and describing scenes where the creatures starve to death out in the wild, animal rights groups paint a different picture — a picture where federal funds are squandered on a program of “mismanagement,” wherein most of the money goes to rounding up the creatures and holding them at facilities throughout the country. And it’s that same logjam of homeless horses that might have been off to the slaughterhouse had the public not gone bananas.

Over the past 20 years, the BLM has maintained round-up and removal as a primary management strategy for wild horse and burro populations on America’s western rangelands – an effort which has led to a financially unsustainable Wild Horse and Burro Program. By focusing massive efforts on removing horses and burros from the range, without treating those horses remaining on the range with any form of fertility control to limit population growth, holding facilities throughout the United States have become overburdened.

In fiscal year 2015, BLM spent $49 million maintaining these horses in off-range facilities, which constituted 46 percent of the entire budget of the agency’s wild horse and burro program. Such a large expenditure has limited the agency’s ability to properly manage wild horses on the range. The HSUS has long recommended the humane and sustainable option of implementing fertility control programs throughout the West.

While activist organizations say humane methods like fertility control should be used, the BLM counters by saying the technique is difficult because the drug wears off in less than two years. Nevertheless, the agency spent nearly $50m just on upkeep for its horses in holding — and that number won’t be getting any smaller unless something gives.

If one thing’s for certain, it’s that the BLM has gotten itself tied firmly in a juggernaut with the land, cattle, ranchers, animal rights activists, and the wild horse — a creature still standing as a symbol of the West.