(EnviroNews World News) — Montreal, Quebec — Many tea makers are substituting plastic for paper with their top-of-the-line, pyramidal tea bags. These expensive, “silken” bags have more room to allow larger leaves to expand, which results in better tasting tea. But these smooth tea bags contain no silk at all.

While consumers are paying more for this tea, they are getting more than they bargain for, in the form of micro and nanoplastics. According to a study by McGill University published in Environmental Science and Technology, when submerged in water that was 95 degrees Celsius (about 200 degrees F), some plastic tea bags leached as much as “11.6 billion microplastics and 3.1 billion nanoplastics into a single cup.” The researchers say the particle-releases recorded from plastic tea bags are “thousands of times higher than those reported previously in other foods” and that elevated temperatures enhanced the contamination.

“We think [the amount] is a lot when compared to other foods that contain microplastics,” Nathalie Tufenkji of McGill University in Quebec, told The New Scientist. According to Tufenkji, the sum of plastic in a cup of tea is “thousands of times greater in mass” than levels found in table salt, which “has been reported to contain approximately 0.005 micrograms [of] plastic per gram.”

Tufenkji told CBC News the result was reached in part because her team counted smaller particles than most other studies dealing with plastic in food. It was also because in other foods, the plastic was incidental. With tea, “you’re literally adding plastic into the beverage,” she said.

The tea bag isn’t the only problem though. Several tea manufacturers use polypropylene, a type of plastic, to seal their paper tea bags and improve their strength so they don’t fall apart in water. This plastic leaches into the tea in a similar fashion to the plastic from “silken” tea bags. According to Green Child Magazine, most tea bags that don’t have a string and tag are sealed with polypropylene and may be up to 25 percent plastic.

The McGill University researchers also dosed water fleas (Daphnia magna) with plastic particles found in the tea. “The particles did not kill the water fleas, but did cause significant behavioral effects and developmental malformations,” Tufenkji told The New Scientist. However, she says that more research is needed to understand possible health impacts in humans.

According to Chemicals.News, polypropylene “can cause genetic mutations and tumors.” It may also mimic estrogen like many other plastics. Labeled as “PP” on containers and indicated with the number “5,” it is one of the most used plastics in food containers and is also considered one of the safest.

Most silken tea bags are made from food grade nylon or polyethylene terephthalate (PET). These plastics have high melting points, which may seem to make them the best choice for tea bags. However, in plastic, it isn’t necessarily the melting point that matters. “Glass transition” points — the temperature at which the plastic begins to breakdown — for both these plastics — are lower than 100 degrees C (212 degrees F) where water boils. This means these plastics are breaking down while the tea is steeping in the cup. According to Science Direct, carcinogenic and estrogen-mimicking antimony (Sb-51) has been found to leach from PET, which is the most common material comprising one-time use water bottles.

“There is very little published research on the potential adverse health effects of chemicals that leach from plastic food containers, so it’s difficult to say they’re safe with any degree of certainty, especially with long-term use,” Anila Jacob, MD, Senior Scientist with the Environmental Working Group, a nonprofit advocacy organization, told WebMD.

Plastic in the Garden

While the World Health Organization (WHO) says there is no evidence of the micro and nanoplastic particles causing health issues in humans, it can cause problems for gardeners. While tea leaves are good for your compost, tea bags that contain plastic are not. Some companies are using biodegradable tea bags, but these may not be compostable either. Gardeners who throw their tea bags into the compost contribute to plastic pollution in their own yards and find that tea bags will not break down in the process.

“Don’t be fooled into thinking that biodegradable tea bags are automatically plastic-free. EU standards allow for a certain amount [of] plastic content when determining if a product can be classed as biodegradable,” Kate Willacy at Pukka Herbs told Pebble Magazine. “Many of the ‘pyramid’ tea bags are either made from non-biodegradable nylon or a genetically-modified plant-based plastic (such as cornstarch) that only decomposes where there is industrial food collection.”

Loose-leaf tea is one alternative to using a plastic-laden tea bag. It can be steeped in the mug, and in most cases sinks to the bottom after a few minutes, though the tea leaves may still be inconvenient for some. A cheesecloth or stainless steel strainer can be used to remove all the plant matter. 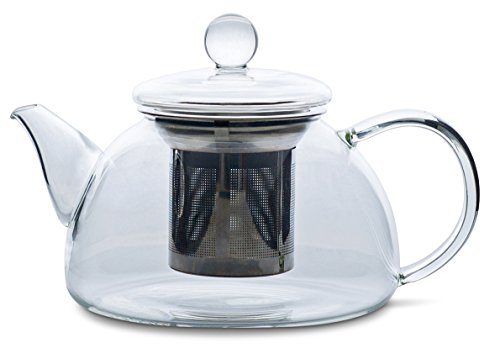 Keurig users can get a refillable stainless steel pod to replace their single-use, landfill-destined tea containers. The tea goes into the pod, which can be reused for years, and the Keurig is then operated normally.

“The truth is, if consumers refused to buy bagged tea and reverted back to loose-leaf tea, the plastic-free tea bag problem would be solved. Perhaps as well as plastic-free packaging, we should also be moving towards entirely packaging-free tea — which in turn would also help ease the other huge issues in the packaging world, such as aluminum and mineral oil contamination,” Caroline Hardaker from Traidcraft, a fair trade company, told Pebble Magazine.

Plastic is used so pervasively in the tea bag industry, it may be best to avoid these products altogether. However, if you still want a tea bag, consumers are encouraged to find a brand that specifically states it has no plastic in its bags. Teapigs, Tea Tonic, and Nature’s Cuppa are a few of the companies choosing not to use plastic. Clipper Tea claims its string-and-tag bags have the “world’s first plastic-free, unbleached and non-GM pillow tea bags.” Numi Organic makes their bags with “natural hemp-based, unbleached filter-paper.” Pukka Herb Teas, owned by UK-based Unilever, uses organic cotton stitching and a fold to seal its tea bags, rendering them biodegradable and compostable.

Considering the reports on the damage caused by plastic straws, bags, and materials in the environment, the tea bag problem could be solved by people switching to loose-leaf and reusable tea infusers. The scientific community may not have proven that micro and nanoplastic particles are dangerous to humans, but it has proven what can happen when people are exposed overtime to micro-sized particles of pollution and radiation – and it isn’t good. In the case of microplastics, caution may be advised.

OTHER RELATED STORIES ON PLASTIC POLLUTION FROM ENVIRONEWS WORLD NEWS

Want Some Salt With Your Plastic? – Study: 17 of 17 Sea Salt Brands Littered With Petrochemicals

(EnviroNews World News) – A study published April 6, 2017, in Nature.com’s Scientific Reports, examined 17 sea salt brands from eight different countries and found chemical impurities in all 17 samples. The primary contaminants include microplastics and pigments associated with textile, rubber and fiberglass products. The study was…

(EnviroNews World News) – There can be little dispute: the world is in a plastic conundrum – and the oceans are being hardest hit. Being filled with plastic bags, water bottles, lighters, milk cartons, and countless other plastic consumer items at a flabbergasting pace, things aren’t looking good…

Saving the World One Organic Cotton Shopping Bag at a Time

(EnviroNews California) – Lorin Trodderman of the Santa Cruz, California-based company Blue Lotus takes us through a tale of plastic pandemonium as he explains the devastation of plastic bags in our eco system, while simultaneously offering a simple and empowering solution. In this educational interview, Trodderman eloquently explains…

Many Kids Received More Plastic Than Candy or Eggs This Easter

(EnviroNews California) – Monte Rio, California – Sonoma County, California is considered one of the most progressive, green and environmentally friendly counties in the United States, but a community Easter egg hunt that went down on March 26, 2016, called the area’s green reputation into question. EnviroKids correspondent…