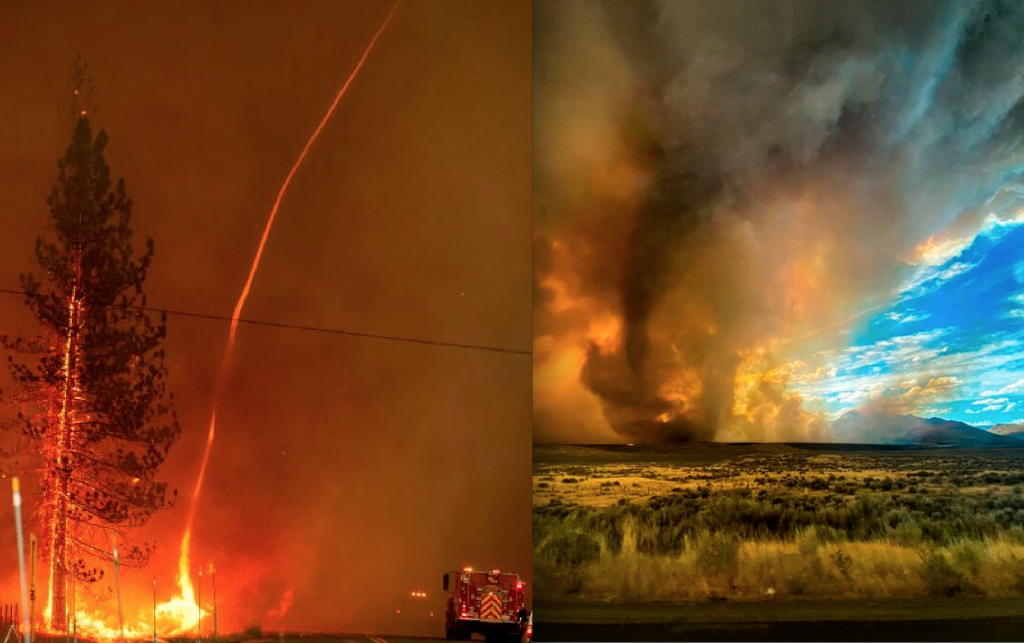 (EnviroNews Headline News Desk) — Portland, Oregon — On Sep. 10, 2020, Leah Stokes, researcher on climate and energy policy and assistant professor at the University of California, Santa Barbara, spoke to Amy Goodman of Democracy Now! about the raging fires on the West Coast and how they are generating their own unprecedented weather systems.

“The thick smoke blotted out so much sunlight, temperatures dropped well below forecasters’ predictions, with meteorologists comparing the effect to a nuclear winter,” narrated Goodman.

When she asked Stokes to comment on the colors in the sky and the subsequent darkness Stokes said the giant fires in the West were creating weather patterns that had never been seen before:

These fires are creating their own weather. They’re creating clouds and kind of tornado-like conditions. And what that is doing is like a volcano eruption. It’s pushing particulate matter way up into the stratosphere, way higher than even airplanes fly. And that is like a volcanic eruption. And so, what we’re dealing with here is particulate matter blocking out the sun. And so, for example, people posted their solar panels and showed that they were getting zero solar radiation, no energy being produced, because the sun was not making its way to the ground. This is what’s happened in the past when we’ve had huge volcanic eruptions. It’s really a disturbing effect, and I can understand why people are so freaked out.

According to Popular Science, the weekend of Aug. 15, 2020 saw no fewer than five “firenadoes” spring up in the Loyalton Fire. Firenadoes aren’t new; they “occur when a fire burns so intensely that it creates its own weather.” Also know as “fire whirls” or “fire devils,” in 2018, a massive F3 firenado from the Carr Fire tore through Redding, CA, and in 2017, Christchurch, New Zealand saw a fire funnel 330 feet tall. However, the firenadoes of 2020 were the first to have a warning issued from the U.S. National Weather Service (NWS).

“Firenadoes are an extreme weather phenomenon that can occur with rotating fire columns,” the NWS tweeted on Aug. 15, from Reno, Nevada. The NWS issued a warning for “tornadic pyrocumulus” clouds of smoke in Roberts Canyon, California.

Record heat waves across the state of California have created the conditions for these extreme weather events. Earth has already warmed by one degree Celsius, which makes it 500 percent more likely to experience heat waves, Stokes said in the interview. These heat waves even contribute to electricity-generating gas plants becoming less reliable. The effects were on full display a couple of weeks ago.

Stokes took the media to task as well:

TV news is completely abdicating its responsibility when it comes to telling the truth of what the West is dealing with right now… [The fires] were fueled in large part by unprecedented heat in counties like Los Angeles County, which set heat wave records of 121 degrees Fahrenheit, Ventura County, Santa Barbara County, Inland [Empire]. I mean, the temperatures were just unseen before in modern human history. So, this is climate change. It’s not rocket science. And when will the media start calling it that?

The media wasn’t the only one to catch Stokes’ ire. She had some harsh words for the President too:

When it comes to our climate-denier-in-chief, Donald Trump, you know, he doesn’t even believe in climate change. He doesn’t listen to scientists, whether that’s the coronavirus pandemic and lying about it and playing down the death toll or it’s climate change. And so, really, we have zero leadership for this emergency from Washington, D.C. And it’s well past time that we have a president who can use the words “climate change” and who can trust and believe in science.

Stokes is the author of Short Circuiting Policy: Interest Groups and the Battle Over Clean Energy and Climate Policy in the American States.

As of Sep. 14, 2020, Washington, California, and Oregon have seen more than 4.9 million acres of land burned. California’s 3.3 million acres is 27 times more than the 2019 total during the same period, and the state’s fire season isn’t over, yet. Towns have turned to ash. The skies have turned orange, and people are calling it a sign of the apocalypse. Worse, 35 people have been reported deceased in the fires so far, with many more casualties expected. According to Oregon’s Emergency Management Director Andrew Phelps, the state is “preparing for a mass fatality event” with scores of residents still unaccounted for.