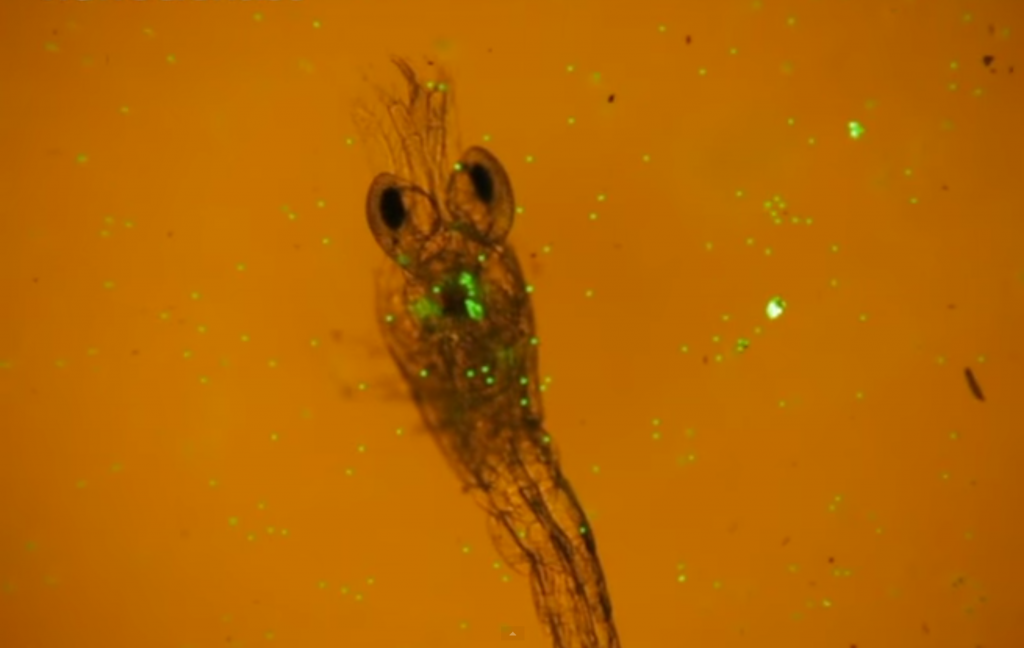 (EnviroNews World News) — Zooplankton have been captured on film feasting on plastic microbeads for the first time New Scientist magazine has reported. The entire three hour event took place inside a single drop of water and was taped under the microscope by Five Films. The unique footage effectively demonstrates how even the tiniest creatures in the sea are far from immune to damaging effects from the roughly eight million metric tons of plastic, littered into the world’s oceans, every single year.

“The team surrounded copepods – a type of zooplankton – with tiny fluorescent polystyrene beads between 7 and 30 micrometres in diameter, then observed how much of the foreign material they consumed,” New Scientist reported on July 6, 2015.

Zooplankton are known to be picky eaters, even discerning between types of algae they will and won’t eat, but the Five Films experiment showed the tiny creature’s filter apparently doesn’t exclude microbead size plastic.

Researchers at Plymouth Marine Laboratory where the experiment was conducted, “have also witnessed other types of zooplankton such as crab and oyster larvae accidentally eating these microplastics, which can remain in their intestinal tracts for up to one week if the zooplankton do not have access to actual food,” reported EcoWatch. “Accidentally feasting on ocean plastic could thus impact plankton survival or reproduction rates, and ultimately move up the food chain as filter feeders dine on plankton,” continued EcoWatch in its article on the Five Films project.

In recent years, there’s been some reporting on the massive accumulation of plastic transpiring at several vortex-like junctures in the world’s oceans. These giant plastic swirls, known as “gyres” are growing in size year by year, as humans hurl more and more plastic by the wayside. One of the gyres, located between California and Hawaii, has been nicknamed the “Great Pacific Garbage Patch” — it now covers an area nearly two times the size of Texas.

After arriving at sea, countless plastic objects float around where they are exposed to the sun, and acted on by organisms and the environment, whereafter they break down continually into smaller and smaller particles in a process of biodegradation that can take centuries.

When plastic breaks down, it can resemble and take on the shape and color of edible lifeforms in the sea. The larger plastic pieces are eaten by big fish and large birds while smaller plastic pieces are preyed upon by smaller fish. Those littler fish are then of course eaten by larger fish and birds, that are then eaten by even larger fish and birds, that are also consuming larger pieces of plastic in addition to the plastic loaded fish they are already consuming — and the vicious cycle continues as the hormone disrupting, cancerous and mutagenic toxins absorbed from the plastic bio-concentrate their way up the food chain — eventually making their way unsuspectingly onto the dinner plates of human beings. And so the cycle continues.

Saving The World One Plastic Bag At A Time

The intake of microscopic plastic particles by plankton, demonstrated by Five Films, is especially concerning when you take into consideration the widespread and escalating prevalence of the cosmetic plastic microbead in waterways and oceans. Microbeads, non-existent just a few years back, are tiny pieces of plastic used in toothpaste, shampoos, facial scrubs and other products that require an exfoliating action.

A plastic bottle for example, takes a good while to break down out in the elements — all the way down into microscopic particles that is. But, with the advent of the microbead, humans are now dumping minuscule, prepped and pre-cut, plastic particles by the billions, into the world’s water supplies — accelerating bio-concentration even further, and exacerbating accumulation and absorption of plastic poisons by the food chain.

Microbeads are being found in greater and greater concentrations in waterways, and are becoming such a problem in some places in the U.S. that several states, including California, are considering bans on products containing the tiny toxic culprits.

Plankton are at the bottom of the ocean food chain, meaning they pass through and become a part of nearly every carnivorous species of animal in the ocean, before further traveling through the entrails of birds, land animals, and ultimately humans.

The majority of plastic products contain estrogenic hormone disrupting substances like Bisphenol A (BPA). These chemicals can have a strong and adverse effect on the reproductive systems of humans — especially the testicles of male children. BPA can also cause early puberty in girls.

With studies now showing a plummeting in sperm counts worldwide over the last couple decades, can humanity really afford to be loading oceans and waterways with prefabbed, microscopic, plastic beads? Considering Five Films has now effectively demonstrated minuscule plastic pellets being confused or substituted as a food source by some of the ocean’s smallest critters, how much of that same plastic will the people have to consume before lawmakers and regulators do anything about it?