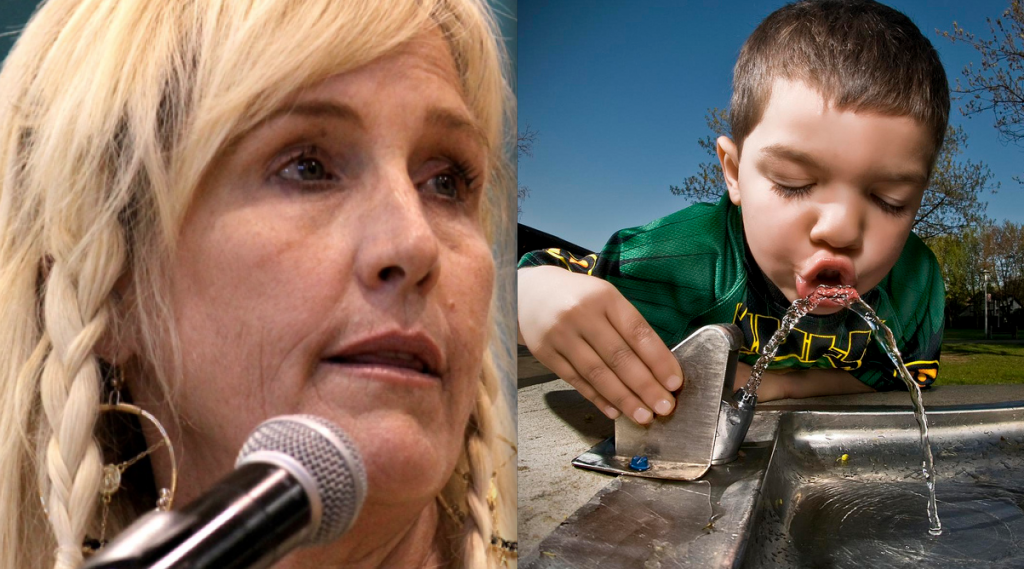 (EnviroNews USA Headline News Desk) — Washington D.C. — Hexavalent chromium (chromium 6), nicknamed the “Erin Brockovich Carcinogen,” is said to “[cause] cancer when ingested at even extraordinarily low levels.” Created as a byproduct from numerous industrial activities, the substance is now in the drinking water of 250 million Americans, an amendment to a 2016 report by the Environmental Working Group (EWG) has revealed. The staggering statistic means approximately 77 percent of the country’s population is now consuming the poison in various quantities — a number that has health experts worried.

The original EWG report, authored by senior scientist David Andrews and magazine editor Bill Walker, was published September 20, 2016. But an amendment added on August 16, 2017, makes the implications in the report even more serious. The amendment reads:

UPDATE: With the release of EWG’s Tap Water Database, we found an additional 32 million Americans who have been supplied water with chromium 6 contamination.

In a writeup, Robert Coleman, a project manager with the EWG, wrote:

In 2016, an EWG report found that chromium 6 — a cancer-causing compound made notorious by the film Erin Brockovich — contaminated the tap water supplies of 218 million Americans in all 50 states. But our just-released Tap Water Database shows the problem is even worse than that.

The EWG says “California scientists based their public health goal of 0.02 parts per billion solely on protecting people from cancer and other diseases.” But a few lines down in its report, a graph clearly shows that many of America’s largest drinking water supplies are contaminated far beyond those levels. For example, the EWG’s chart shows the water supply for Phoenix, Arizona, a supply serving 1.5 million people, is contaminated to a level of 7.853 parts per billion — a level nearly 400 times higher than the California health-goal. 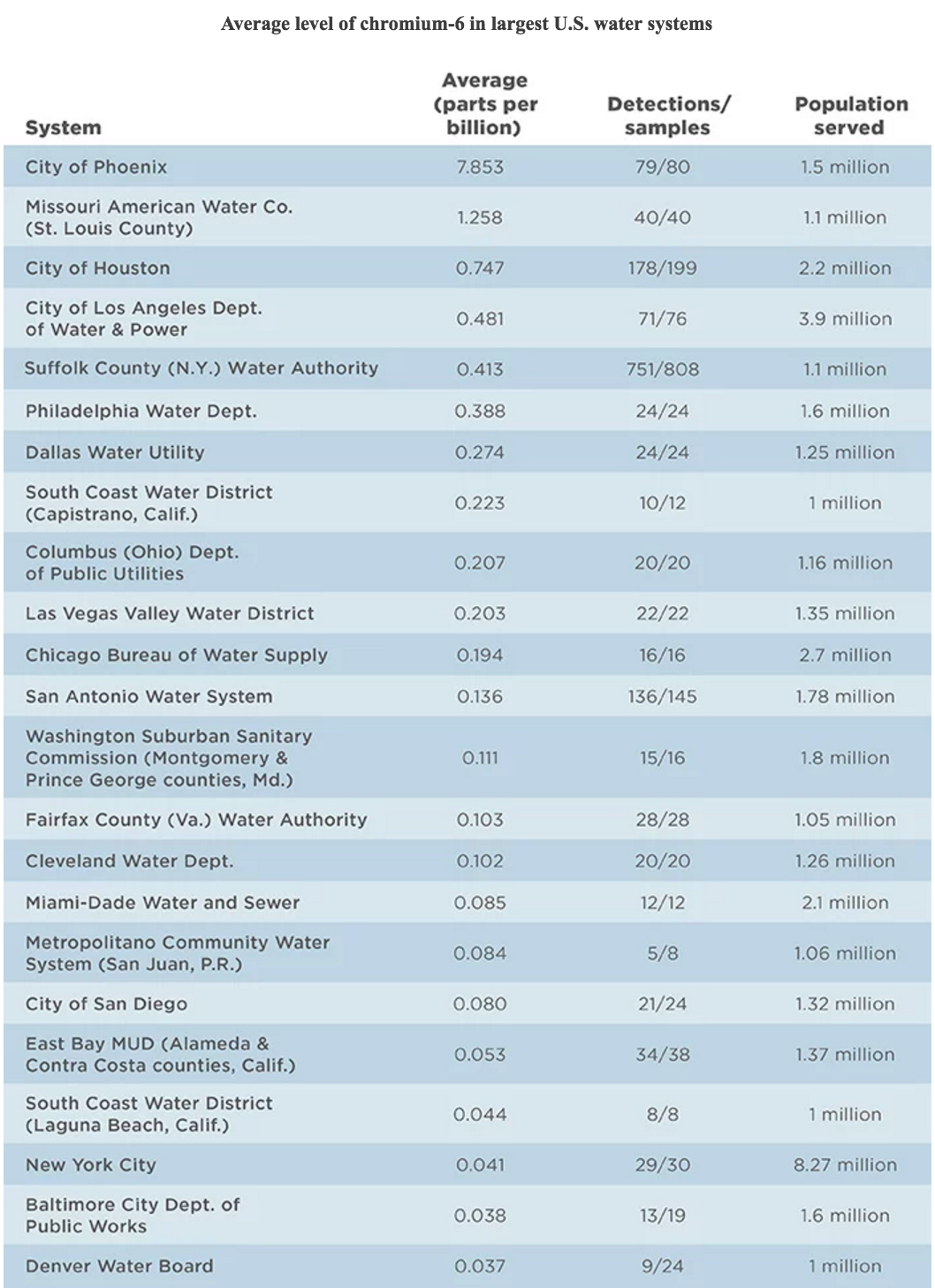 Coleman says the problem is likely even worse than the new amendment indicates because “water from most smaller utilities and private wells usually is not tested for chromium 6.”

In addition to several forms of cancer, according to the Occupational Safety and Health Administration (OSHA), the adverse health effects from Chromium 6 exposure are many, and may include “asthma, eye irritation and damage, perforated eardrums, respiratory irritation, kidney damage, liver damage, pulmonary congestion and edema, upper abdominal pain, nose irritation and damage, skin irritation, and erosion and discoloration of the teeth.”

Hexavalent chromium is used in textile dyes, wood preservation, chromate conversion coatings, dyes, paints, inks, and plastics. It is added as an anticorrosive agent to paints, primers, and other surface coatings. Within the European Union, the use of chromium 6 in electronics is largely banned by the Restriction of Hazardous Substances Directive.

Thus far, California is the only state to set a benchmark for Chromium 6. Now, the EWG is urging the federal government to “follow California’s lead and set a nationwide legal limit on chromium 6 in drinking water, and require both large and small utilities to test for it.”

The EWG has also created an interactive map. The diagram color codes the entire Unite States down to the county. Users may enter their own zip code or click their county and the system will return data on the chromium 6 levels in their area’s water supply. 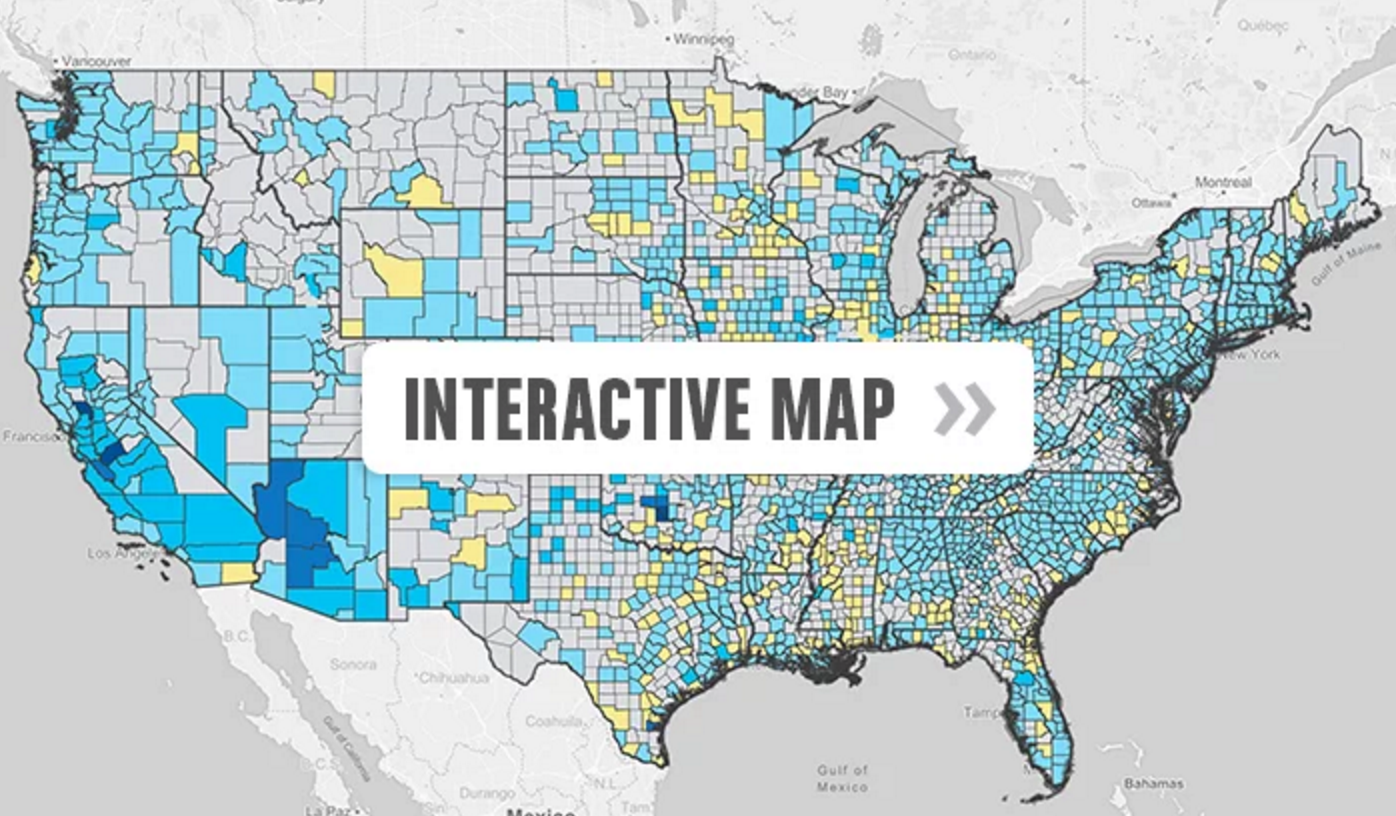 From 1952-1966, in a small town named Hinkley, just outside Barstow, California, Pacific Gas and Electric (PG&E) had been up to no good. Specifically, the company had been using Chromium 6 as a rust inhibitor and tainting the town’s water supply all the while. Even decades on, Hinkley residents suffered an array of serious health consequences and rare cancers, but until Brockovich stepped onto the scene, the townsfolk were largely clueless as to the cause.

When the real Erin Brockovich (“real” meaning not Julia Roberts who played the celebrated environmental activist in the Academy Award-winning film Erin Brockovich) finally unburied the smoking guns in the case, a health tragedy was revealed: PG&E was to blame for the myriad mysterious maladies afflicting the people.

The ensuing direct-action lawsuit put Brockovich on the map, and cost PG&E a boat-load of cash — $333 million to be exact, comprising the largest direct-action payout in U.S. history at that time. But Brockovich didn’t stop there. She continues her attacks on PG&E to this day, having cost the company an additional $335 million in a followup suit.

A passage from the movie script reads:

Donna Jensen: And you say this stuff, this hexavalent chromium — it’s poisonous?

Donna: Well, Erin it’s just gotta be different than what’s in our water, ’cause ours is okay. The guys from PG&E told me. They sat right in the kitchen and told me that it was fine.

Erin: I know, I know. But the toxicologist that I’ve been talking to, he gave me a list of problems that can come from hexavalent chromium exposure. Everything you all have is on that list.

Donna: No, no, no. No, that’s not what our doctor said. He said that, well, that one’s got absolutely nothing to do with the other.

Erin: But PG&E paid for that doctor.

(Donna sits quietly, trying to make sense of this, then runs to get her kids out of the pool.)

“It’s inexcusable that the government has done so little to protect us from this chemical that has been shown to cause cancer at even insanely low levels,” Brockovich recently said, in regards to Chromium 6 — the dangerous poison, now nicknamed in honor of her fight against it.

CHECK OUT THESE GREAT VIDEOS FEATURING ERIN BROCKOVICH ON ENVIRONEWS:

(EnviroNews California) – The infamous accident at Pennsylvania’s Three Mile Island power facility is typically the first meltdown that comes to mind when people think about nuclear disasters in America. While journalists and editors at CNN have reported it was the worst nuclear meltdown ever in the United…

Erin Brockovich Is Asked: “Why no time for environmental crime?”

(EnviroNews California) – Los Angeles – There have been few instances in the history of the industrial revolution where anyone has actually gone to jail for atrocities committed against the environment. It seems at least pertinent to ask: Why hasn’t anyone been put in handcuffs yet for the…

(EnviroNews California) – Los Angeles – Erin Brockovich is a people’s champion when it comes to battling against big industrial polluters who contaminate and poison groundwater, so much so that they even made a Hollywood movie showcasing her first amazing success story in Hinkley, California. The movie, ‘Erin…

(EnviroNews California) – Los Angeles – In this interview segment, Erin Brockovich reveals exactly what can be done at the community level to fight back against large and often irresponsible industrial polluters.

(EnviroNews California) – “How are we going to dispose of it without destroying ourselves?” This was the question posed by celebrity activist Erin Brockovich to EnviroNews California during a full-feature sit-down interview in Los Angeles. Medical waste is a topic that most people have probably given very little…

(EnviroNews California) – Los Angeles – In a full-feature sit-down interview with EnviroNews USA Editor-in-Chief Emerson Urry, celebrity activist Erin Brockovich laid down strong messages on an array of environmental topics. From fracking to nuclear meltdowns, this woman is a coast-to-coast, worldwide environmental activism powerhouse. After catapulting into…

Erin Brockovich to Concerned Residents in Stockton CA: ‘We are all one when it comes to protecting our water’

(EnviroNews California) – Stockton, CA – At a packed and emotionally charged town-hall meeting on Feb 1, 2016, in Stockton, California, celebrated environmental activist and consumer advocate Erin Brockovich addressed a crowd of over 1,200 people concerning the city’s festering water crisis. After failing a compliance test for…

Team Erin Brockovich on Stericycle: “We’re going to see some people go to jail for this!”

(EnviroNews Utah) – Concerned and downright outraged citizens congregated outside preceding a town-hall that featured freshman Republican Congressman Chris Stewart, who just also happens to be the Chair of the Congressional environmental subcommittee. The groups and individals shared a unified message that preached the same ideal from a…

(EnviroNews California) – Stockton, California – As the festering water crisis in Stockton, California continues to unfurl, legendary groundwater defender and celebrity activist Erin Brockovich arrived on the scene February 1, 2016, to add her voice to the many outraged voices from the community, already calling foul. Traveling…