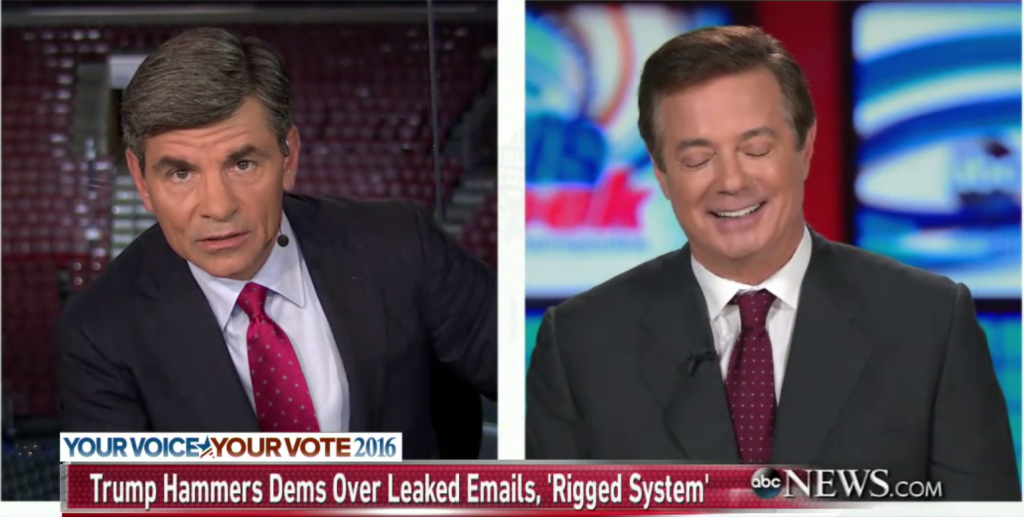 Day and Horowitz wrote in the report:

Manafort proposed in a confidential strategy plan as early as June 2005 that he would influence politics, business dealings and news coverage inside the United States, Europe and former Soviet republics to benefit President Vladimir Putin’s government, even as U.S.-Russia relations under Republican President George W. Bush grew worse.

AP claims Manafort and Deripaska, “a close Putin ally,” entered into a $10 million annual contract and that their work together continued until at least 2009, according to multiple interviews “and business records obtained by the AP.”

Amongst those “business documents” is a propositional memo to Deripaska in 2005 wherein AP says Manafort wrote, “We are now of the belief that this model can greatly benefit the Putin Government if employed at the correct levels with the appropriate commitment to success” — this in a political climate where “U.S.-Russia relations under Republican President George W. Bush [were growing] worse.”

AP also obtained documents that demonstrated “international wire transfers for millions of dollars” between Manafort and the Russians.

Deripaska is a mining oligarch, amassing a fortune in the aluminum industry. Diplomatic cables from 2006 explain him as one “among the 2-3 oligarchs Putin turns to on a regular basis.” AP also reports Deripaska “owns Basic Element Co., which employs 200,000 people worldwide in the agriculture, aviation, construction, energy, financial services, insurance and manufacturing industries.”

What makes today’s revelation so stinky is the fact Manafort was pinned down in 2016 by George Stephanopoulos of ABC News about whether or not he had “any ties” with the Russians. Manafort denied the claim.

Stephanopoulos asked Manafort, “Are there any ties between Mr. Trump, you, or your campaign, and Putin and his regime?” Manafort responded, “No there are not. That’s absurd, and there’s no basis to it.” Today, AP found that’s just not true.

Manafort is further denying many of the accusations and is even saying he’s being “blackmailed.” However, Manafort did admit to AP that he worked for Deripaska, but said the nature of the work is being mischaracterized.

The revelation comes on the heels of other controversial news today surrounding Chairman of the House Intelligence Committee, Devin Nunes. Nunes is leading the investigation into Russia’s meddling into the 2016 presidential election, and today went to the White House, in a hotly contested maneuver, with what he said was possible evidence of Trump campaign surveillance. Senator John McCain (R-AZ) said Nunes’ controversial move creates “a requirement for a select committee” — and many Democrats on the Hill agree.