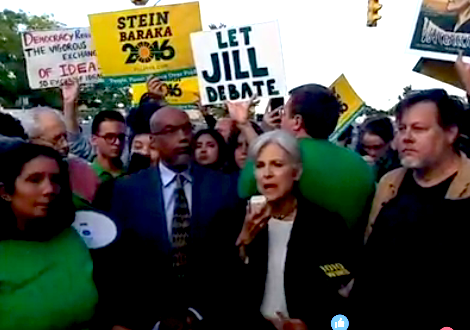 (EnviroNews D.C. News Bureau) — Hempstead, New York — On Sept. 27, 2016, Green Party presidential candidate Jill Stein attempted to gain access to the first debate between Republican and Democratic candidates Donald Trump and Hillary Clinton, but was instead shut down by police due to what some are calling an arbitrary ruling based on trumped up numbers and percentages.

According to USA Today, Stein and her team boarded the press bus to get to Hofstra University where the event was hosted, but were recognized by USA Today reporter Eliza Collins, who tweeted about Stein’s presence, blowing her cover. Law enforcement officials then scrambled to track down Stein who was not credentialed to be there. Despite contending she was there for legitimate purposes, Stein and her staff complied with law enforcement and were escorted off campus.

With the controversial demise of Bernie Sanders on the Democrat ticket, and the looming sense of dread over a man who has intimated he would use nuclear weapons, third party candidates, Jill Stein and Gary Johnson from the Libertarian Party, have gained popularity and votes. However, both candidates were barred from the debate because they could not reach the minimum threshold of 15% voter support in nationwide polls. That did not stop Stein from trying to get into the debate.

After being stuffed by the cops, Stein turned to Twitter as a way to answer the same questions put to the Republican and Democrat candidates, and told USA Today that the use of social media had advanced enough that she didn’t feel the need to disrupt the debate.

“Given that we’ve been able to break through with these social media tools in effect we are opening up the debates,” Stein told the press. “I have an opportunity to have a voice that can be heard by tens of millions on social media.”

Why risk arrest to protest closed #debates? Because we love our children & want them to live in a democracy. #OccupyTheDebates pic.twitter.com/0Qch9sdU92

Protestors of the debate held rallies and sit-ins outside the Hofstra campus. According to RT, 17 Stein supporters were arrested for their participation in acts of civil disobedience.

“What we are witnessing is not a political debate, but literally a police state,” Stein’s campaign manager David Cobb told RT. “There are multiple fence perimeters to prevent even ordinary people from getting on to this public campus. Jill Stein has press credentials and was literally escorted off this campus.”

Stein is no stranger to struggling with police over being denied entry to debate forums. Four years ago, the candidate was restrained and detained, by being handcuffed to a chair for about eight hours, also at a presidential debate at Hofstra.

This isn’t the first time that a Green Party candidate has faced problems at a debate venue either. During the elections in 2000, Green Party candidate Ralph Nader was barred from the University of Massachusetts. According to the New York Times, Nader had a ticket to the event and was planning on going to the secondary site where the debate was being televised. But the commission and law enforcement banned him from the debate site entirely.

In spite of Nader’s claims at the time that “this is the last debate that the debate commission is going to choke off part of America” and “that’s got to be the worst mistake the debate commission ever made,” third party candidates have still been ruled out of the events on multiple occasions when lawsuits have been thrown out by judges.