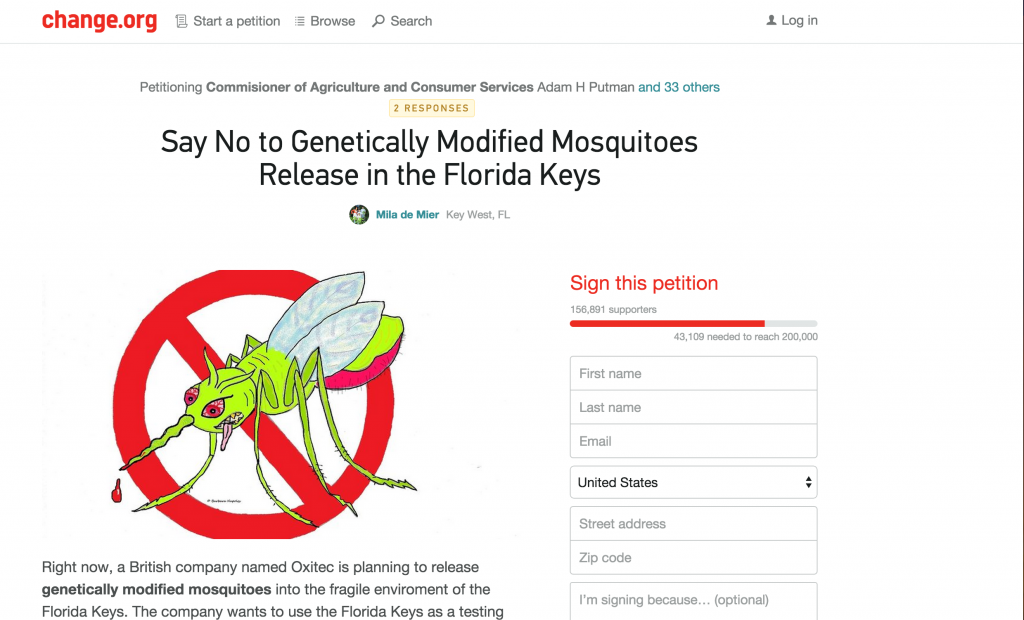 (EnviroNews World News) — Mila De Mier is a South Florida real estate businesswoman and mother who launched a petition on Change.org nearly three years ago. The cause: Stop the release of the OX513A genetically modified mosquito into Key Haven before it happens at all.

That petition is still going strong and is even picking up steam as the date of possibly releasing these mutated insects into the open environment rapidly approaches.

The Florida Keys Mosquito Control District (FKMCD) has announced that it plans to let loose millions of male “yellow fever” GMO mosquitos possessing a “kill switch” gene into the wild, in an effort to wipe out the population of this particular species of mosquito in the Key West area. The project would be conducted in concert with Oxitec — a UK-based bioengineering firm.

The Food and Drug Administration (FDA) is currently reviewing the plan and is expected to sign off on the experiment. If FDA does approve, releases of the tetracycline-reliant mosquito could begin as early as this summer. Aedes aegypti, as it is scientifically called, carries and transmits Dengue Fever and Chikungunya — two illnesses that are contracted by millions worldwide ever year. South Florida had an outbreak of Dengue in 2009, but there have been few, if any reported cases in the area since then. Nevertheless, FKMCD is intent on releasing the “frankenskeeters” despite widespread opposition in the community.

As of June 15, 2015, De Mier’s petition has amassed around 157,000 signatures. Due to the real possibility that these GM mosquitos could be released this summer, more media outlets have jumped on the issue.


De Mier said in a PBS documentary on the subject, “[At first] I say wow! This is fantastic. This is a really really great idea. To be able to fight mosquitos with another mosquito — what a great concept.” But after De Mier took more time to research the matter, her view on the subject changed. “I don’t want my kids to be laboratory rats. I don’t want my kids to be guinea pigs. Why? Because this is a brand new technology. You get these mosquitos — you release once and for all and let’s experiment and see what happens,” she continued in the PBS film.


The petition can be viewed at this link:
https://www.change.org/p/say-no-to-genetically-modified-mosquitoes-release-in-the-florida-keys