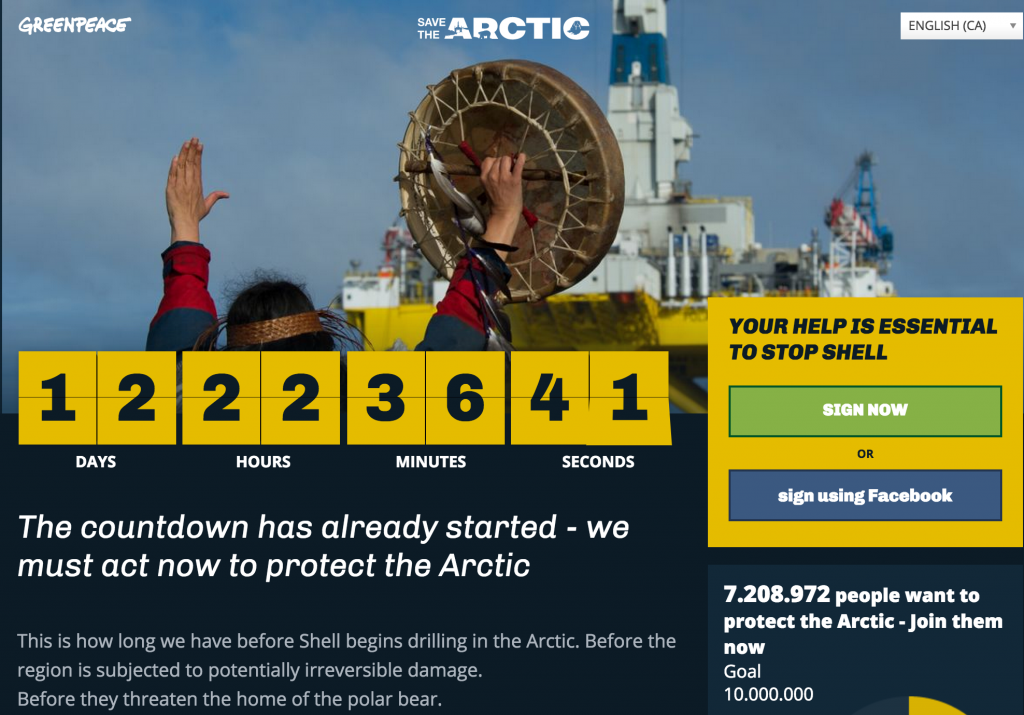 (EnviroNews World News) — Vancouver, BC — In the wake of yesterday’s protest wherein Audrey Seigl, a Native American First Nations activist, put her body in front of the 300-foot-tall “Polar Pioneer” deep ocean drill rig with only a feather and a drum, Greenpeace Canada’s “Save the Arctic” campaign has launched its official countdown to the perforation of the Alaskan arctic seafloor for oil. In May, the Department of the Interior (DOI) approved a conditional use permit allowing Shell to commence its exploratory endeavors for deep ocean oil in Alaska’s Chuckchi Sea — a plan that Shell has been working on for several years to the tune of seven billion dollars.

When the behemoth football-field-high drill rig came rolling into Seattle’s harbor last month for a pitstop, it was met by hundreds of brightly colored blockading boaters aptly called “kayactivists” who vowed to hinder, hamper and stall the giant machine’s progress however they could. Greenpeace Canada’s response to Shell Oil’s risky lust for Arctic ocean oil has been the “Save the Arctic” campaign — a petition driven action that so far has gathered over seven million signatures — making it one of the most effective and far reaching signature drives we’ve ever seen here at EnviroNews (and we’ve seen a lot).

The official campaign page has a goal of signing on 10 million people before drilling is scheduled to commence in under two weeks — this, in an effort to put a complete stop to Shell’s hasty, reckless Arctic drilling ambitions. Save the Arctic Campaign Official Countdown

Following DOI’s green light for the plan in May, EnviroNews DC News Bureau released a scathing editorial discussing what it would look like to transplant a BP-like spill from the warm inviting waters of the Gulf of Mexico, where emergency crews are always a phone call away, to the icy choppy waters of the Chuckchi sea at the end of drilling season in the far North. That article can be read at the clickable headline just below. The full “Save the Arctic” campaign page and sign-able petition can be viewed at this link: https://www.savethearctic.org/