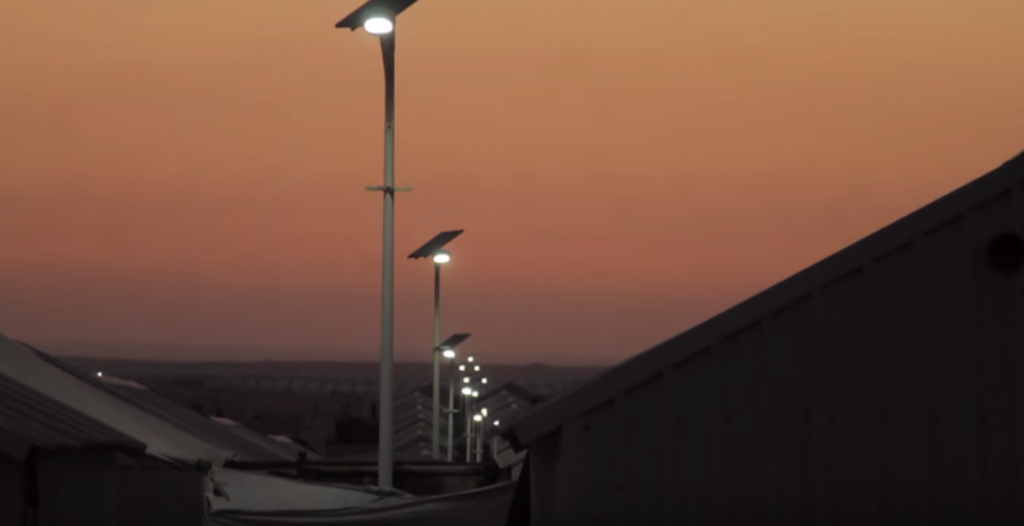 (EnviroNews World News) — Azraq, Jordan — The newly activated two-megawatt solar photovoltaic power plant at the Azraq refugee camp in Jordan is the first refugee camp in the world to be powered by a renewable energy facility. The plant started running May 17, 2017, and will provide free energy to about 20,000 of the 36,000 refugees in the area – all victims of the Syrian conflict, now in its seventh year.

There are close to 15 million refugees in the world, and the integration of free renewable energy into their stressful lives is invaluable. “Lighting up the camp is not only a symbolic achievement; it provides a safer environment for all camp residents, opens up [livelihood] opportunities, and gives children the chance to study after dark. Above all, it allows all residents of the camps to lead more dignified lives,” said United Nations High Commission for Refugees (UNHCR) Deputy High Commissioner, Kelly T. Clements.

“Before this, when we cooked a meal we had to throw the leftovers away because there was no safe way to store food. When we got too hot, we had to pour water on our clothes to keep cool. Now we can listen to music or have a cold glass of water, and daily life no longer ends when the sun sets,” Fatima, a 52-year-old from Damascus who lives in the camp with her two adult sons, told the UNHCR.

UNHCR partnered with the Government of Jordan, Jordanian solar company Mustakbal, and IKEA to build this camp. The IKEA Foundation is UNHCR’s largest private sector partner and fully funded the solar installation through their “#BrighterLives4Refugees” campaign. The endeavor raised $9.6 million for the cause by donating a portion of IKEA’s LED light sales in 2015.

20,000 of the individuals now living in the desert camp have had some access to non-renewable electricity since January 2017, and they now receive additional power from the sun. The new solar station is connected to Jordan’s grid and is intended to provide electricity to the remaining 16,000 refugees at Azraq by early 2018. The solar initiative will save UNHCR $1.5 million a year, which it can devote to other refugee services, while reducing annual CO2 emissions by roughly 2,370 tons.

The 500 new solar LED streetlights make the camp safer at night, which was especially concerning for women and girls, UNHCR relayed. Mustakbal also provided training and employment to over 50 refugees. “I wasn’t able to finish my education because of the war and then exile, but this has given me a practical skill that I can hopefully use in the future. If we return to Syria, the infrastructure is all destroyed, but this is a technology that we could use to rebuild,” said Mohammad, 20, who was forced to leave school at age 14.