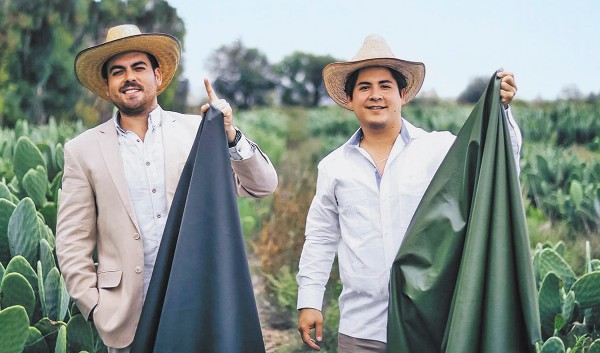 (EnviroNews World News)— Mexico’s Adrian Lopez and Marte Cazarez have taken the nopal cactus (Opuntia), more commonly known as the prickly pear, and turned it into an environmentally friendly, animal friendly alternative to leather and its oil-based plastic alternative “pleather.” They have been working on the process for over two years and project the resulting vegan fabric will last for more than a decade. The duo says their cactus leather alternative is easier to clean and more breathable than plastic substitutes. With their freshly forged company Adriano Di Marti, they are now ready to take on the industrial world in both the animal and petrochemical leather sectors.

The two men came up with the idea while thinking about how the cactus is used in shampoos and other cosmetics. According to The Mind Unleashed, they thought that if it was good for the skin, it would make good leather.

Lopez and Cazarez blended the nopal fibers with cotton to create a textile that looks, feels and acts like leather. It has been formulated to meet the requirements of the clothing, furniture and automobile industries. The two are confident that anything made of leather could be made just as easily from their innovative alternative.

In an interview with Heraldo de Mexico Lopez said:

Mexico has the potential to innovate, [especially] with nopal, which is the symbol of the country. But so many people told us we were crazy! Even our engineers told us that [it] could not be done.

We said: ‘Why not? We are in Mexico, we are Mexicans, what raw material is more suitable for us to exploit than nopal? It grows by itself, it doesn’t need much watering, it doesn’t waste much water.’

That’s when we began to experiment with the nopal and, after several tests, we were able to develop a resistant material.

When Lopez says nopal is the “symbol of the country,” he isn’t kidding. The cactus is featured on Mexico’s Coat of Arms, which is on the Mexican Flag. Within that symbol, the prickly plant serves as a pedestal for the Mexican Eagle (Caracara cheriway).

The two men took their cue from other fruit-based leathers (not to be confused with edible “fruit leather”). In Italy, a textile made from the waste product from apple processing called Frumat is one type of substitute. Pinatex is another faux leather made in Spain from discarded pineapple leaf fibers.

Other Uses of Prickly Pear

The nopal cactus is a staple in the Mexican diet. Its pads and fruit are both edible for humans and farm animals. High in magnesium, vitamin C and manganese, nopal is used in salads and in meat and egg dishes. The fruit has been used as a dye for cloth and murals, and it has medicinal properties known to soothe the symptoms of diabetes and cleanse the colon according to Mexican Agriculture Department Official Sergio Martinez.

There are about 300 species of nopal in all, of which 114 are endemic to Mexico. According to codigoespagueti.com, other inventors have found a way to turn the plant into “a resilient and flexible” fiber for use in aeronautics. It has been used to create biodegradable plastic as well, which according to The Mind Unleashed, is safe for ingestion by people and sea life.