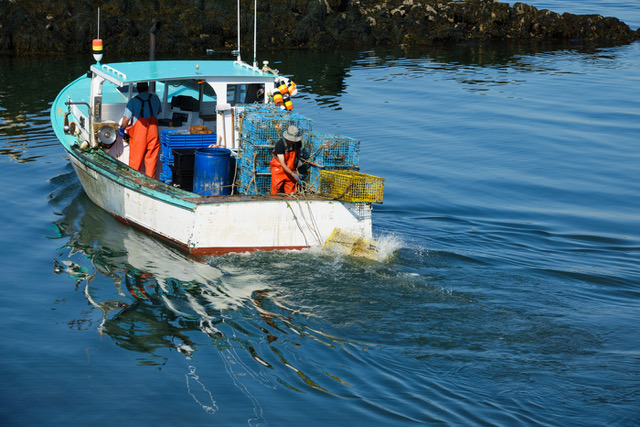 (EnviroNews DC News Bureau) — A seafood industry that brought nearly 600 million pounds of fish to the table in 2015, put 97,000 people to work and added $4.8 billion to the economy is now at risk due to a changing climate. Warming seas and ocean acidification are placing a traditional way of life and an industry older than the nation in jeopardy.

Commercial fishing in the cold, rich waters off present-day New England predates the Pilgrims by more than a century. As early as the 1500s, ships from France, Spain and Portugal came to the Grand Banks by the hundreds. In 1607, drawn by the ready supply of seafood, the Plymouth Company established a short-lived settlement in Popham, Maine, and by 1620 – the same year the Plymouth Colony was founded — a permanent fishing station was established at Monhegan Island.

“The U.S. Northeast Shelf accounts for just over a third of the annual value of commercial fish throughout the U.S.,” said Vincent Saba, Fisheries Biologist for the NOAA Northeast Fisheries Science Center. “New Bedford, Massachusetts is the most valuable port across the entire U.S.”

But now, many of New England’s commercially-valuable fish are hard to find in these waters. The once-bountiful harvests of Atlantic cod have disappeared, along with shrimp, skate and whiting.

To better understand what’s been happening, look first to the American lobster (Homarus americanus). This prized shellfish was once harvested throughout New England waters, from Long Island Sound to the Canadian border. First, the good news: Maine set an all-time record in 2016, landing more than 130 million pounds of lobster. But in Southern New England, landings fell from a high of 9,935 metric tons in 1997 to just 1,509 metric tons in 2013 – a shocking decline of 85 percent, according to a 2015 study by the Atlantic States Marine Fisheries Commission (ASMFC).

The report concluded the fishery was severely depleted because lobsters have been moving northward to find colder waters. “Temperature is the primary driving force as it influences a lobster’s metabolism, spawning, development, and growth,” stated the ASMFC. “The ideal temperature range for lobsters is 12-18 degrees Celsius (54-64 Fahrenheit) and the hatching of eggs typically occurs when surface water temperatures are above 12 degrees Celsius.” The report noted the number of days with water temperature above 20 degrees Celsius (68 Fahrenheit) is increasing in waters south of Cape Cod, while the Gulf of Maine has more days in the ideal temperature range.

A 2009 study from the NOAA Northeast Fisheries Science Center found that half of the 36 commercial fish species it examined were migrating to more suitable habitats. “During the last 40 years, many familiar species have been shifting north where ocean waters are cooler, or staying in the same general area but moving into deeper waters than where they traditionally have been found,” said Janet Nye, a postdoctoral researcher at NOAA’s Northeast Fisheries Science Center (NEFSC) laboratory in Woods Hole, Massachusetts, in a statement from NOAA. “They all seem to be adapting to changing temperatures and finding places where their chances of survival as a population are greater.”

The study noted that sea temperatures have been increasing over the past 50 years, and that the species redistribution they found was consistent with ocean warming. But researchers have found the Gulf of Maine warmed faster than 99 percent of the world’s ocean waters over the last 10 years.

It’s not only the fish and shellfish that are at risk – American jobs are too. Commercial fishing in the five New England States of Connecticut, Maine, Massachusetts, New Hampshire and Rhode Island and the Mid-Atlantic Region, which includes Delaware, Maryland, New Jersey, New York and Virginia, together create 124,000 jobs. Altogether, commercial fishing in those two regions accounts for more than $10 billion in economic activity.

The U.S. now imports 90 percent of the seafood it consumes, according to the 2017 U.S. Seafood Market Report. The cod we find in supermarkets and restaurants likely comes from Norway, Russia or Iceland. Maine fishermen brought in just 170,000 pounds of cod in 2016 — a record low and a precipitous decline from the 21 million pounds landed just 25 years ago. In 1969, Maine alone brought in 24 million pounds of shrimp, according to the state’s Department of Marine Resources. By 2013, landings totaled just over half a million pounds. Today, about 90 percent of the shrimp we eat in the U.S. comes from India and Southeast Asia.

The ocean waters off the northeast coast of the U.S. are busy and heavily industrialized, yet still remain a commercially important fishery. Container ships and oil tankers visit ports all along the coast. Recreational boaters vie for space in busy harbors and marinas. Naval operations are present at the Portsmouth, New Hampshire naval shipyard and New London, Connecticut submarine base, while the new Block Island Wind Farm sits along a high-density shipping lane east of Montauk Point.

Whales also rely on the plankton and small forage fish that are abundant here. Fin, sei and North Atlantic right whales – all of which are listed as “Endangered” by the International Union for the Conservation of Nature (IUCN) – visit the waters off the northeast coast from spring until fall. Minke whales and humpbacks are common as well.

But these environmentally sensitive and commercially important waters are vulnerable to changes brought on by climate disruption. A study from the NOAA Northeast Fisheries Science Center, released May 27, 2017, used new high-resolution climate models to predict future changes. Saba has compared the new model to the difference between looking at an ultra-high definition (UHD) television versus an old, standard-definition screen. NOAA determined that ocean temperatures along America’s Northeast Shelf will rise an additional 6.6 to 9 degrees Fahrenheit by the end of the century — two to three times faster than the global average. “Species concentrated in the Gulf of Maine, where species have shifted to deeper water rather than northward, may be more likely to experience a significant decline in suitable habitat and move out of the region altogether,” said lead author Kristin Kleisner, formerly of the Northeast Fisheries Science Center’s Ecosystems Dynamics and Assessment Branch and now a senior scientist at the Environmental Defense Fund (EDF).

Warming waters are not the only problem. The world currently depends on seafood for 17 percent of its animal protein, but ocean acidification is taking a toll on shellfish, hampering their ability to build strong shells. Acidic waters also carry less dissolved oxygen, which can stunt the growth of certain fish.

To top it all off, another new study has found the fish we eat could become less nutritious. In a paper to be published in the August 2017 edition of the Journal of Experimental Marine Biology and Ecology, researchers from Southern Cross University in Australia subjected whelks, a type of sea snail, to ocean warming and acidification conditions that are expected by 2100. They found the protein content of the gastropod was cut in half. The animals also lost lipid, glycogen and mineral content. The study concluded, “Ocean climate change may compromise its nutritional qualities and reduce sustainable harvests in the future.”

The United States signed the “Call to Action” along with 192 other nations at the conclusion of the first U.N. Ocean Conference, held June 5-9, 2017. The Call to Action states, “We are particularly alarmed by the adverse impacts of climate change on the ocean, including the rise in ocean temperatures, ocean and coastal acidification, deoxygenation, sea-level rise, the decrease in polar ice coverage, coastal erosion and extreme weather events.” However, Reuters reported that Deputy U.S. Assistant Secretary for Oceans and Fisheries David Balton reminded the conference participants that President Trump will withdraw “or renegotiate” the nation’s participation in the Paris Climate Agreement (Paris Accord).

President Trump has also ordered a review of the Northeast Canyons and Seamounts Marine National Monument, which was created by President Barack Obama on September 15, 2016, to protect sensitive areas off the New England coast. Commercial fishing in the area is limited to lobster and red crabs, but upwelling currents of cold water are rich in forage fish that support whales, seabirds and commercial fish including tuna. The new administration is also set to begin seismic testing along the Atlantic coast, a precursor to offshore drilling and a practice fraught with controversy for its adverse effects on sea life.

New England fishermen are also worried about Trump’s proposal to eliminate NOAA’s Sea Grant program, which has collaborated with the University of Maine since 1971. The cooperation helps educate and train the marine workforce, conducts research critical to coastal and ocean resources and works with local communities. In the last four years, Sea Grant Maine says it has created or sustained 300 businesses and 130 jobs.

Potential federal budget cuts and actions that threaten the protection of these vital Atlantic waters only compound the challenges brought by ocean warming and acidification; even the thriving Maine lobster industry won’t be immune. Saba said, “As the waters are warming, the lobsters are shifting more offshore, where there are deeper, colder waters.” Lobstermen may need to spend more on fuel or find fewer lobsters in their traps. As for coldwater species like cod and haddock, Saba calls them “climate change losers.”

As the waters along the Northeast coast continue to warm, the livelihoods of U.S. fishermen are threatened. “Given the historical changes observed on the Northeast Shelf over the past five decades and confidence in the projection of continued ocean warming in the region, it is likely there will be major changes within this ecosystem,” stated Kleisner in the 2017 NOAA report. Those changes will affect the country’s food supply and economy.