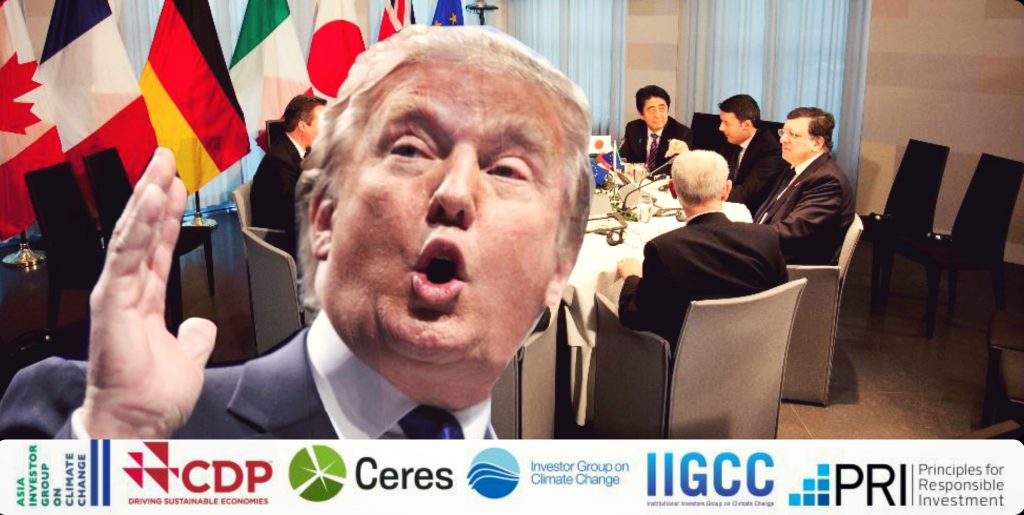 (EnviroNews USA Headline News Desk) — On May 8, 2017, 217 leading global investors sent a letter to the White House and other members of the Group of Seven (G7) urging adherence to the Paris Climate Agreement (Paris accord). The investors, who wrote to the U.S., Canada, France, Germany, Italy, Japan and the United Kingdom, manage more than $15 trillion in assets worldwide. The letter was also sent to the leaders of the Group of 20 — an international forum of major global economies.

“As long-term institutional investors, we believe that the mitigation of climate change is essential for the safeguarding of our investments,” the letter states. “We urge all nations to stand by their commitments to the Agreement.”

President Trump campaigned on a promise to “cancel” the Paris accord while Environmental Protection Agency (EPA) Administrator Scott Pruitt called for an “exit” from the deal on April 13.

“Mr. Trump’s potential decision to leave the Paris Agreement would be poison for global climate efforts and leave investors in a limbo of uncertainty,” said Pelle Pedersen, signatory and head of responsible investment at the Danish pension fund PKA, according to the Financial Times.

Ceres, a sustainability nonprofit focusing on economic solutions, helped coordinate the dispatch. In a press release, CEO and President Mindy Lubber described the U.S.’s waffling over the Paris accord as “hugely troubling.” She said “stable policy signals” relating to climate are necessary for willing international investors to “open their wallets to a low-carbon future.”

Stephanie Pfeifer, CEO of the Institutional Investors Group on Climate Change, another group that helped to produce the collaborative message, urged countries to move forward with lowering carbon emissions “regardless of what the U.S. administration does,” Reuters reported.

Global leaders are meeting in Bonn, Germany May 8-18 to discuss specifics of the climate agreement and prepare for COP 23: the Bonn Climate Change Conference, in November. Also, the governments of the G7 will meet at a summit in Italy May 25-26, while leaders of the Group of 20 will meet in Germany in July.

CNBC explained U.S. officials will meet Tuesday to discuss the possible withdrawal from, or alteration of, the U.S.’s commitment to the Paris accord.