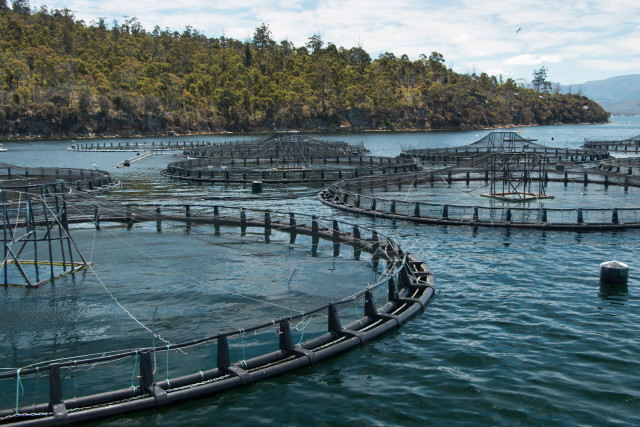 The farm is owned by Canada-based Cooke Aquaculture Pacific, which originally estimated 4,000-5,000 of the pen’s 305,000 fish escaped. Nell Halse, a spokeswoman for the company, has since acknowledged the amount of fish spilled “is a far greater number than the few thousand initially stated by the company,” according to the Seattle Times.

“The release of net pen-raised Atlantic salmon into Washington’s waters has created an emergency situation that has state agencies working together to protect the health of our salmon,” Inslee said in a statement.

Due to concerns that the farmed Atlantic salmon could negatively impact native Pacific salmon, the Washington Department of Fish and Wildlife (WDFW) is now encouraging anglers to catch the escaped fish, with no size or catch limits in place.

“Our first concern, of course, is to protect native fish species. So, we’d like to see as many of these escaped fish caught as possible,” said Ron Warren, head of WDFW’s Fish Program. Warren added that there is no evidence the Atlantic salmon will harm the Pacific salmon through breeding or disease.

“I wouldn’t call them healthy. They have weird little deformations on their faces,” fisherman Lucas Kinley, who has already caught several of the escaped fish in Washington, told the Los Angeles Times.

Local anglers are also concerned that released salmon will feed on young native salmon. “It’s a devastation,” fisherwoman Ellie Kinley told the Seattle Times, adding, “we don’t want them getting up in the rivers.” But, it may already be too late.

Anglers reported scooping up the fugitive fish all over the area — including in tribal waters of the Swinomish. “These fish are headed to every river in Puget Sound,” Brian Cladoosby, Chairman of the Swinomish Indian Tribal Community, told the Seattle Times. “We have been saying all along it was not a question of if, but when, this would happen.”

As well as cultivating disease organisms, Our Sound, Our Salmon points out that net pens produce significant ocean pollution and are “capable of creating environmental disasters like toxic algae blooms, which are disastrous for fish and shellfish populations.” Our Sound, Our Salmon is protesting a Cooke Aquaculture proposed net pen in the nearby Strait of Juan de Fuca.

Cooke Aquaculture also has operations in Maine, Chile, Scotland and Spain. The company originally blamed high tides associated with the solar eclipse on the net failure but retracted that claim when scientists questioned it, and now simply cites high tides and currents as the cause. Jonathan White, author of Tides: The Science and Spirit of the Ocean, said, “The eclipse does have an effect, but in this case, the effect was not so large that it created an extraordinary large tide.”

“It will be some time before we know how many fish escaped the net pens. That’s why we’ve authorized Cooke Aquaculture to fish with beach seine nets and we’re encouraging anglers to go out and harvest these fish,” said Warren.

Anglers in the Puget Sound do not have to include Atlantic salmon on their catch report cards. WDFW has posted a salmon identification guide to support the fishing efforts.

(EnviroNews Nature) – British Columbia, Canada – Salmon returning to the Fraser, the longest river in British Columbia (BC), were at their lowest level since record keeping began this fall. Fewer than 900,000 sockeye (Oncorhynchus nerka) are projected to have returned to their traditional breeding grounds, causing commercial…