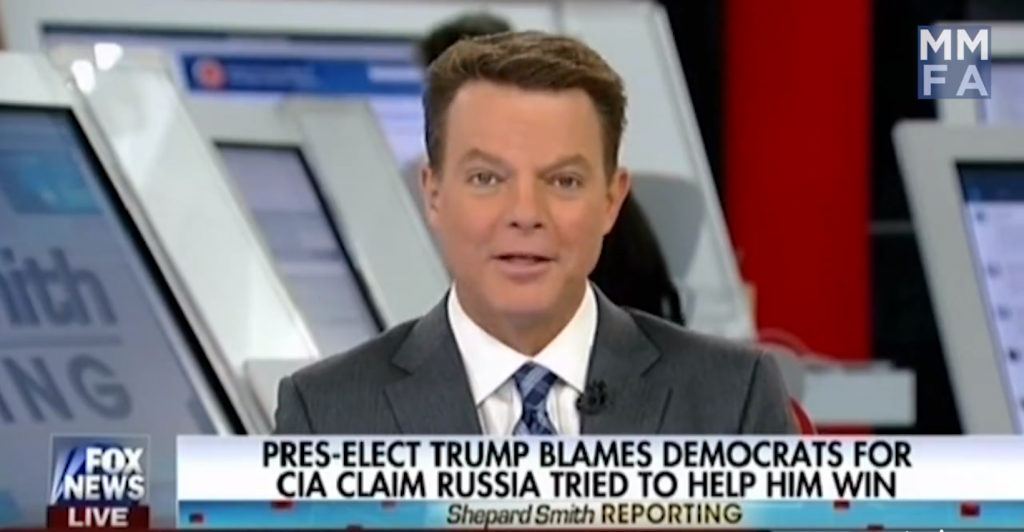 (EnviroNews USA Headline News Desk) — Love him or hate him, President-Elect Donald Trump went so far into left field with his latest comments on Russia’s reported election hacking, that not even Fox News would get behind him.

In a Fox News segment hosted by Shepard “Shep” Smith last week, the anchor straight up put the President-Elect on blast, shooting informational bullet holes in his claims that the intelligence community’s findings were some kind of “conspiracy theory.”

Trump cheered in late October when FBI Director James Comey made a suspiciously political public announcement about Hillary Clinton’s emails, just one week prior to the election — but now Trump is singing a different tune, after the CIA, FBI and all 17 federal intelligence agencies coalesced behind what they all say is proof that Russia, at the direct behest of Vladimir Putin, hacked the U.S. and meddled in its election in an effort to get Trump elected.

Trump now says the intelligence community doesn’t know what’s it’s talking about, calling the allegations unfounded. But Smith said not so fast, first quoting a couple Tweets from the President-Elect. “Can you imagine if the election results were the opposite, and we tried to play the Russia/CIA card. It would be called a conspiracy theory!… Unless you catch ‘hackers’ in the act, it is very hard to determine who is doing the hacking. Why wasn’t this brought up before [the] election?” Trump’s Tweets stated. To which Smith chimed in, “It was brought up before the election — over, and over, and over again. U.S. officials absolutely did say before the election that Russian hackers stole emails from Democratic officials and gave them to the website Wikileaks.”

Smith: But according to the Washington Post [and] the New York Times, the CIA has since determined, it was all part of an effort to help Donald Trump — not simply to disrupt the election, but to help Donald Trump, and 17 national security agencies are in on this assessment. The New York Times reports the hackers also targeted Republican computer systems, but never released any stolen information there. So, we don’t know what they got, but we know that our intelligence agencies say they hacked into Republican computers too. And then there’s the RNC Chairman Reince Preibus who says nobody hacked their computers. And President-Elect Trump says the hacking claims are all just sour grapes from Democrats — which is absolutely not true. These are the findings of 17 national security agencies, with evidence compiled before the election even happened. Still, here’s what Trump told Fox News Sunday anchor Chris Wallace in an interview:

Wallace: So why would the CIA put out this story that the Russians wanted you to win?

Trump: Well, I’m not sure they put it out. I think the Democrats are putting it out because they suffered one of the greatest defeats in the history of politics in this country.

The Republican leadership is also not in step with Trump’s stance, voicing discontent with Putin’s shenanigans and getting behind the investigations into Russia’s scheme. Senate Majority Leader Mitch McConnell said in a press conference, “Let me just speak for myself. The Russians are not our friends. And I think we ought to approach all of these issues on the assumption that the Russians do not wish us well.”

In addition to denying the CIA and other national security agencies know what they are doing or what they’re talking about, Trump has also been turning his nose up at intelligence briefings — a move that has many citizens concerned that Trump may be starting off on the wrong foot with the intelligence community, alienating them and causing a rift before he even takes office.

Now, Americans watch and wait to see if the President-elect will face reality and take a different stance, both with the hacking investigations, and with the intelligence community at large.