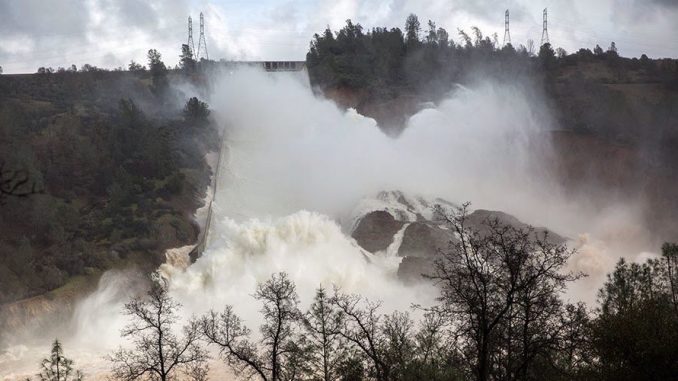 The National Weather Service said the Oroville Dam’s emergency spillway system is reaching critical and is expected to fail; the result of which will be an “uncontrolled release of flood waters from Lake Oroville,” the agency continued.

This weekend represents the first time the auxiliary spillway has ever been used. Initially, it appeared the measure would offer relief to the swelling reservoir, but after officials detected a hole in that emergency backup system, evacuations were ordered without further ado.

The Oroville Dam has been in danger all week after the reservoir behind it reached capacity and caused serious damage to its primary spillway. A “frantic effort” has been underway for the past several days, in an effort to thwart a major flood catastrophe, reported the LA Times, but the task has proven too much, as all nearby communities south of the dam have now been ordered to make an “urgent” run for it. Officials are still reportedly on-site at this hour attempting to repair the emergency spillway.

KRCA journalist Tom Miller reported speaking with an official from the California Governor’s Office of Emergency Services (CAL OES) who described the possible failure of the dam as “potentially catastrophic.”

A news piece written by Paul Rodgers for The Mercury News, shows federal and state officials ignored warnings 12 years ago that the emergency spillway could fail under the stress of torrential rains.