Notice Anything Unique About Trump's Posse at Muslim Travel-Ban Signing? (Hint: It's All White People) - EnviroNews | The Environmental News Specialists
Skip to content 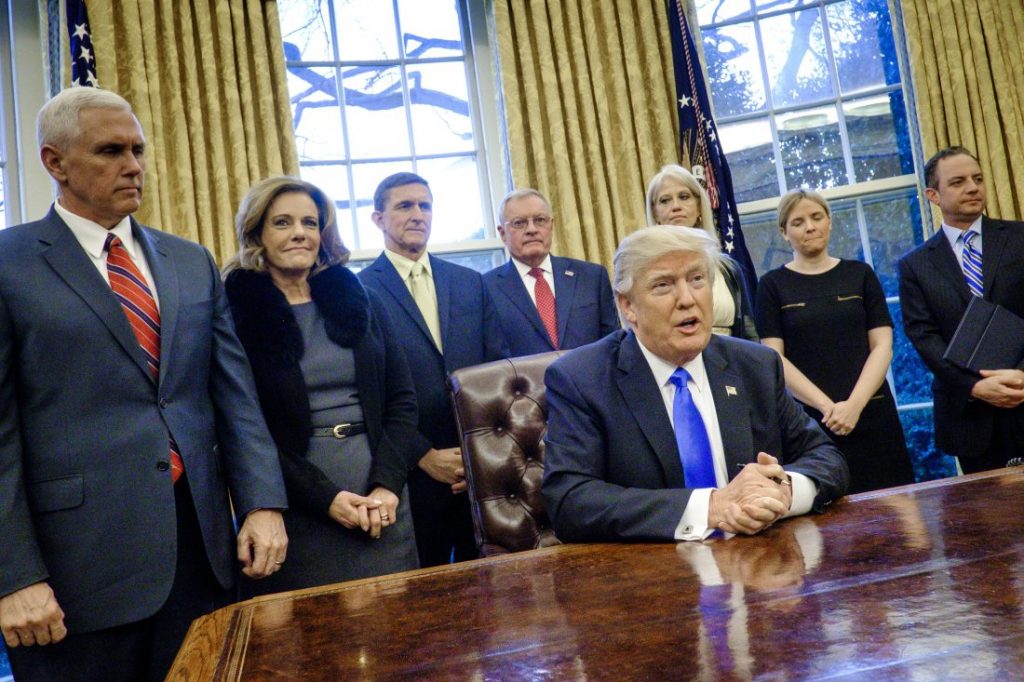 Nearly 200 people have been detained at airports around the country, and emotional protests erupted in some of those places, including JFK Airport in New York where many thousands turned out to let the Trump Administration know they are not ok with the new policy, after 11 foreign travelers were detained there.

It is extremely rare for EnviroNews to report on issues of race in any form or fashion, but one thing about this particular executive order signing struck members in the newsroom: everyone surrounding Trump at the signing was white — suspicious to say the least. On the surface, it just looks very bad.

More specifically, the crew present included members of Trump’s National Security Council (NSC), including newly-appointed and highly controversial former Goldman Sacs Executive and Breitbart News Founder Steve Bannon. Bannon was promoted to the seat, while other members of the NSC, including Director of National Intelligence Dan Coats and Chairman of the Joint Chiefs of Staff Joe Dunford were demoted, and will now only attend NSC meetings when their expertise is deemed necessary — a move former National Security Advisor Susan Rice called “stone cold crazy.”

This is stone cold crazy. After a week of crazy. Who needs military advice or intell to make policy on ISIL, Syria, Afghanistan, DPRK? https://t.co/Mmyc139w3M

Which ever way you slice it, it doesn’t look good. That is, a white president, surrounded by all white people, including members of the NSC, signing an executive order that bans brown people from entering the United States. It just doesn’t feel like the inclusive America most people are used to.

Perhaps Trump should consider appointing a Native American person to the NSC. After all, Native Americans, as they have reiterated, have been fighting terrorism, and practicing Homeland Security since 1492.