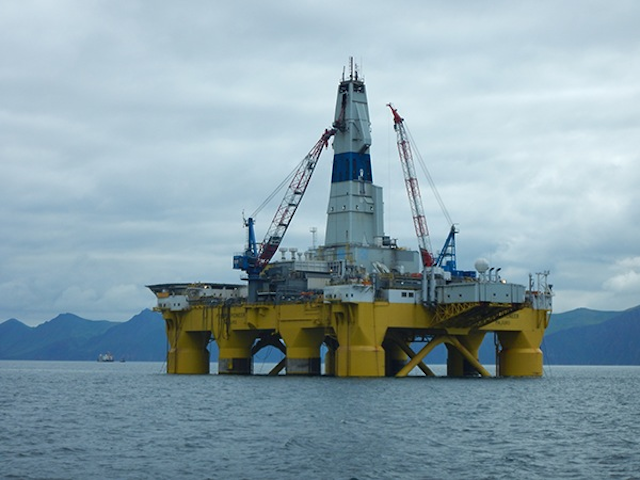 (EnviroNews Alaska) — Chukchi Sea — Maintaining wildlife observers, installing a 30-foot piece of equipment called a “capping stack” and drilling only one site at a time, represent just a few of the requirements placed on Royal Dutch Shell in order to continue its exploratory mission for deep-ocean oil in the Chukchi Sea in Alaskan waters.

Despite fierce opposition from a multitude of environmental groups, on August 17, 2015, Shell received the go-ahead from the Obama Administration to proceed with drilling activities at the Burger Prospect site, located in about 140 feet of water, 70 miles northwest of the village of Wainwright.

According to the Bureau of Safety and Environmental Enforcement (BSEE), Shell’s application to modify an existing permit for Burger J (there’s also a Burger V) was filed Aug. 6. The approval was handed out “under a robust array of safety requirements,” said BSEE in a statement.

Greenpeace USA Executive Director Annie Leonard had a different point of view, writing this in a statement:

This approval means the Obama administration is leaving the fate of the Arctic up to Shell this summer. But that doesn’t mean the future of the Arctic has to be in Shell’s hands.

While President Obama has made some progress during his term on reducing emissions through measures like the recent Clean Power Plan, his environmental legacy will be determined by the steps that he takes to keep fossil fuels in the ground.

The Obama administration should know better than to bend over backwards to approve such a reckless plan. The President has seen how big the movement to save the Arctic and to keep fossil fuels in the ground has become, and it’s only going to get bigger if he doesn’t put a stop to this catastrophic plan.

“Activities conducted offshore Alaska are being held to the highest safety, environmental protection, and emergency response standards,” BSEE Director Brian Salerno said in a press release. “Now that the required well control system is in place and can be deployed, Shell will be allowed to explore into oil-bearing zones for Burger J. We will continue to monitor their work around the clock to ensure the utmost safety and environmental stewardship,” Salerno continued.

The capping stack, a piece of emergency response equipment designed to shut in a well in the “unlikely” event of a loss of well control, was stuck on the massive “icebreaker” vessel M/V Fennica, which had been docked in Oregon for repairs after a large gash mysteriously appeared in the ship’s hull. The delay brought even more attention and opposition to Shell’s exploration efforts.

According to reports, M/V Fennica reached the drilling site on Aug. 11, and Shell said the 30-foot device will be ready to be deployed within 24 hours.

Environmental groups have long opposed drilling under the ocean-floor in the Chukchi Sea. Currently, Shell is still prohibited from simultaneous drilling at Burger J and V sites, due to U.S. Fish and Wildlife Service marine life protection requirements. Part of those stipulations limit Shell to a minimum spacing of 15 miles between active drill rigs during exploration activities to avoid adverse effects on walruses in the region.”

• All phases of an offshore Arctic program – preparations, drilling, maritime and emergency response operations – must be integrated and subject to strong operator management and government oversight, as detailed in Shell’s Integrated Operations Plan
• A shortened drilling season to allow time for open-water emergency
response and relief rig operations late in the drilling season before projected ice encroachment
• Capping stack must be pre-staged and available for use within 24 hours
• A tested subsea containment system must be deployable within eight days
• The capability to drill a same season relief well
A robust suite of measures to avoid and minimize adverse impacts to marine mammals and their habitat, impacts to Native subsistence activities, and other environmental impacts
• Drilling units and their supporting vessels must depart the Chukchi Sea at the conclusion of each exploration drilling season
• Shell must have trained wildlife observers on all drilling units and support vessels to minimize impacts to protected species

According to BSEE, safety inspectors have been present on the drilling units Noble Discoverer and Transocean Polar Pioneer 24 hours a day, seven days a week in a continuous effort to monitor activity.

BSEE also said, close oversight of drilling operations in the Chukchi Sea this year “is consistent with its continuing efforts over the past five years to upgrade safety standards to improve the safety of offshore oil and gas development.”

This decision follows the, much-anticipated White House announcement of President Obama’s visit to the 49th State later this month. Through an ironic twist of fate, the theme of the Commander-in-Chief’s visit is climate change in the Arctic.