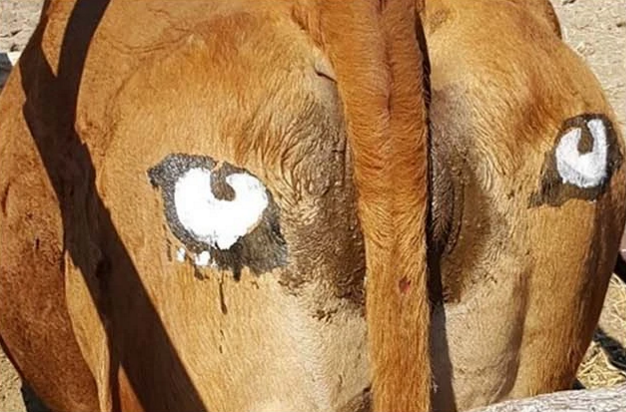 (EnviroNews World News) — Okavango Delta, Botswana — In the wild, the Brazilian frog (Physalaemus nattereri) uses eyespots to fake out and deter predators and holds a toxic gland as a secondary line of defense. The foureye butterflyfish (Chaetodon capistratus) has a false eye near its tail, which scientists believe it uses to confuse predators that expect the fish to escape in the opposite direction, from which it actually swims. That split-second distraction is often enough for it to get away. The tiger swallowtail caterpillar (Papilio glaucus) uses its eyespots to mimic the look of a snake, which keeps birds from eating it through sheer intimidation scientists say. Now, researchers from New South Wales are helping cattlemen in Botswana to reverse engineer these innovations from nature.

In an effort to improve the survival of livestock, protect livelihoods and save Africa’s mighty predators from being slaughtered, teams are now painting eyes on the backsides of cows – and they say it’s really working. The results of the study were published on August 7, 2020 in the journal Communications Biology.

The domesticated cattle herds near the Okavango Delta World Heritage Site in northern Botswana face threats from both leopards (Panthera pardus) and lions (Panthera leo). When a cow is killed, the farmers often hunt down the cat or use poison against it, which contributes to the further decline of these large iconic felines. Lions and leopards are rated as “vulnerable” by the International Union for the Conservation of Nature (IUCN), and their numbers are on a downward plunge.

“Lions are ambush predators that rely on stalking, and therefore the element of surprise, so being seen by their prey can lead to them abandoning the hunt,” said Neil Jordan, an ecologist with the University of New South Wales (UNSW) and Taronga Western Plains Zoo. “We tested whether we could hack into this response to reduce livestock losses, potentially protecting lions and livelihoods at the same time.”

Jordan started with a small, 10-week study to test his hypothesis. In a herd of 62 cows, he painted eyes on the rear ends of 20. They all survived while three of the unmarked cows were killed by large cats. With these promising results, Jordan and his partners started a larger study in 2015. They stamped acrylic eyes on the rumps of 683 cows, drew black crosses on 543, and left 835 untouched. Through 2018, none of the cattle with the eyes on their behinds were killed. Surprisingly, only four of the cows painted with crosses were killed, which was much lower than the 15 unadorned cows that were eaten.

“Protecting livestock from wild carnivores, and carnivores themselves, is an important and complex issue that likely requires the application of a suite of tools, including practical and social interventions,” Jordan said in a statement. “The eye-cow technique is one of a number of tools that can prevent carnivore-livestock conflict — no single tool is likely to be a silver bullet.”

According to the researchers, these results may seem promising, but it’s important to note that the painted cows were always with unpainted cows. The next test will need to determine if four-eyed cows fare better when all in one group, instead of alongside cattle that may be more vulnerable. The eyes could lose their effectiveness as predators get used to them as well.

“To our knowledge, our research is the first time eyespots have been shown to deter large mammalian predators,” UNSW PhD student and co-author Cameron Radford said in a statement. “We think this may suggest the presence of an inherent response to eyes that could be exploited to modify behavior in practical situations – such as to prevent human-wildlife conflicts and reduce criminal activity in humans.”

Scientists aren’t exactly sure why eyespots work though there are multiple possibilities. As discussed in EnviroNews’ own short report and original film, the pearl-spotted owl’s (Glaucidium perlatum) eyespots may confuse predators into thinking the owl is larger than it is. Prey may also have difficulty understanding what the owl is looking at. Some experiments show that conspicuousness is more important than mimicry though different species may use them for different reasons.

(EnviroNews Nature) – Often witnessed under attack by hoards of small and pesky little birds, this tiny fella’, small and active by day, is constantly on the look out for both danger and prey. The pearl-spotted owl (Glaucidium perlatum) stands 20 or less centimeters tall, and weight a…