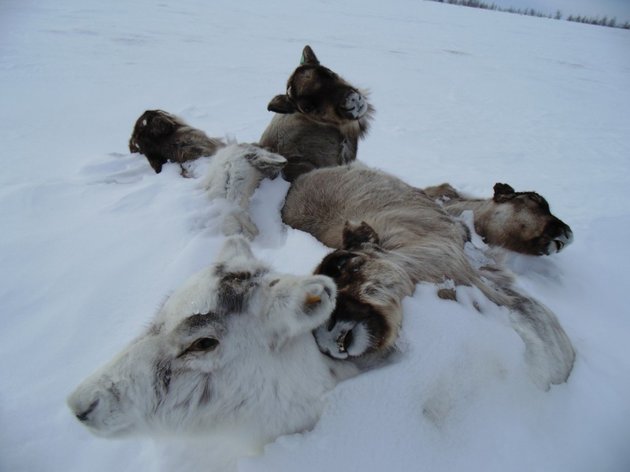 (EnviroNews World News) — Yamal Peninsula, Siberia — When rain started falling on the reindeer herd in the arctic region of Yamal Peninsula in Siberia in November of 2013, it is unlikely the reindeer (Rangifer tarandus) themselves thought anything of it. After all, harsh weather conditions mean little to animals evolved to live in deep snow and high winds. However, when the rain falling through the unseasonably warm air hit the cold ground of the tundra, it froze solid when temperatures dropped. The ground, and more importantly, the food supply for the animals, hardened like a rock. The herd’s hooves couldn’t break through the ice and 61,000 animals perished from starvation. Their demise was slow and certain; their food source just inches from their mouths, yet so far away — unobtainable and unreachable.

The most cynical of people might wonder what the big deal is – after all, it’s just a bunch of wild animals. However, the dead reindeer weren’t alone in their plight. They formed the economic and cultural background of the indigenous Nenets, who use the animals for meat, trade and transportation. In this case, the nearest slaughter house was too far away to save any of the meat or fur, and hence, the nomads had to burn the bodies.

This group of people not only lost their livelihoods, but also their way of life. Without the reindeer, the nomadic tribe has no way of pulling their belongings across 700 miles of land. They had to adapt to being fishers until they could rebuild the herd of semi-domesticated reindeer.

This is not the only event where rain-on-snow has killed a large number of animals. In 2006, there was a similar occurrence that claimed 20,000 animals, and herders said there have been events like this about once a decade, highlighting episodes in 1947, 1954, 1974 and 1996. However, researchers are concerned there’s more ROS dilemmas to come. As sea ice in the arctic melts, and the world warms due to anthropogenic climate change, more rain will fall in the north and it will turn to ice as the temperature drops later in the year, leaving more herds stuck starving out in the cold.


The warming also brings with it the threat of herd-wide anthrax infection. The last Anthrax outbreak was in 1941. The bodies of the dead animals froze in the tundra and kept the pathogen locked away. With temperatures climbing ever northward, those bodies are beginning to thaw releasing the anthrax into environment — and according to researchers, in August of 2016, some of that anthrax from 1941 got liberated from the permafrost, infecting several indigenous community members, and killing a 12-year-old boy.

Scientists have suggested a solution to both problems: Mobile slaughterhouses will be able to cull the infected animals quickly and safely. They could also kill the animals who would otherwise starve when the next rain-on-snow event hits the region.

Just don’t tell your children Santa won’t be coming ‘round because climate change is killing all the reindeer. Rest assured, Santa will find another way to get there.