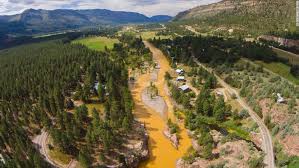 (EnviroNews World News) — Salt Lake City, Utah — Governor Gary Herbert (R) declared a state of emergency on Wednesday August 12, 2015 in the wake of a toxic mine tailings spill into the Animas River in Colorado by the U.S. Environmental Protection Agency (EPA) on August 5, 2015.

The EPA had been working on cleanup at the abandoned gold mine when all hell broke loose and three million gallons of poisonous sludgy orange water burst free and poured into the Animas — a waterway that flows downstream and adjoins other rivers that make their way into New Mexico and Utah.

CNN reports, one sample showed quantities of lead in the water to be 12,000 times “safe” levels. Lead and other of the aforementioned metals can cause kidney disease, cognitive declines and disorders, lower IQs in children, decreased intelligence, cancer and myriad other health problems.

The Animas River is a tributary of the larger San Juan River, which is a significant tributary of the massive, yet dwindling Colorado River. All included, the Colorado River Basin, with its mighty river and veinous network of tributaries, brings potable water to 30 million Americans — many of which are in some way, shape or form, downstream from the fast-moving disaster.


Locals near the brightly-colored and poisoned river were furious after feeling the need to take precautions such as using imported water for drinking and household needs.

Utah Attorney General Sean Reyes was on the scene in the Four Corners area, investigating the damage on behalf of the “Beehive State.” Though it is not yet known if lawsuits against the EPA will ensue, the three affected states, in addition to myriad other private parties, have alluded that legal action and court battles may be on the horizon.

EPA’S RESPONSE TO ITS OWN BLUNDER

EPA Administrator Gina McCarthy attempted to quell local concerns in a press conference stating, “The very good news is that data so far is showing that water quality does restore itself to its prior conditions” — a statement that seems to run parallel with the old cliche’ “the solution to pollution is dilution.” This statement reeks of damage control and evades basic science.

Water quality does not “restore itself to its prior conditions” when it is contaminated with substances of an elemental nature like lead and mercury. The pollution will continually fall out into the open environment and be absorbed through myriad pathways, small and large, throughout the food chain. The water will not magically “restore itself” from elemental pollution.

Heavy metals are heavy — that’s why they are aptly called “heavy.” The smaller the disintegration or particle, the lighter it will be, and the more prone it will be to being carried and whisked away far downstream. That is the nature of environmental fallout in both air and water. The larger heavier particles concentrate closer to the source of the spill — the heavier the particle, the less susceptible it will be to be carried away on currents.

In response to the catastrophic Gold King, Animas River mine-tailing spill, caused by the Environmental Protection Agency (EPA) itself on August 5, 2015, Gina McCarthy and the Agency have made a patently false statement to the media.

McCarthy assured the press in Colorado, “The very good news is that the data so far is showing that water quality does restore itself to its prior conditions” — a statement clearly aimed at damage control as the Agency reels in the wake of its own environmental disaster. The EPA should know better.

The idea that water, contaminated with substances elemental in nature, will “restore itself to its prior conditions,” falls flat in the face of first-grade-level science. It also insinuates that EPA embraces the old notion that “the solution to pollution is dilution” — a concept known by science and toxicology to be untrue.

Undoubtedly, much of the heavy metal contamination from the Animas spill will land itself on river beds, to be cumulatively absorbed by fish and other wildlife over years and decades, as it bio-concentrates its way up the food chain, landing eventually on the dinner plates of humans.

There is also the almost certain inevitability that flooding and irrigation will carry more of the fallout onto floodplains, farmlands and rural properties, contaminating soil, crops and groundwater supplies along the way.

It is the strong editorial position of EnviroNews USA that pollution, elemental in nature, does not magically disappear once it is freed from a safely sequestered position underground, and let loose into the environment. Once the horse is out of the barn, it will remain out of the barn — unless it is captured and put back in that is — not an easy task of course when an entire river ecosystem is soiled.

The EPA has a tough job with these rickety old mine sites to say the least, and has many cards stacked against it in the face of the fossilized “1872 Mining Law.” Nevertheless, it mustn’t tell whoppers in an effort to quell outraged citizens and community concerns.

Other than the minuscule samples taken for water testing, has even one particle of heavy metal contamination, of the three million gallons let loose into the Animas from this spill, been cleaned up? If not, that means it’s still out there for all living things to be exposed to. So let’s just all be honest about it.