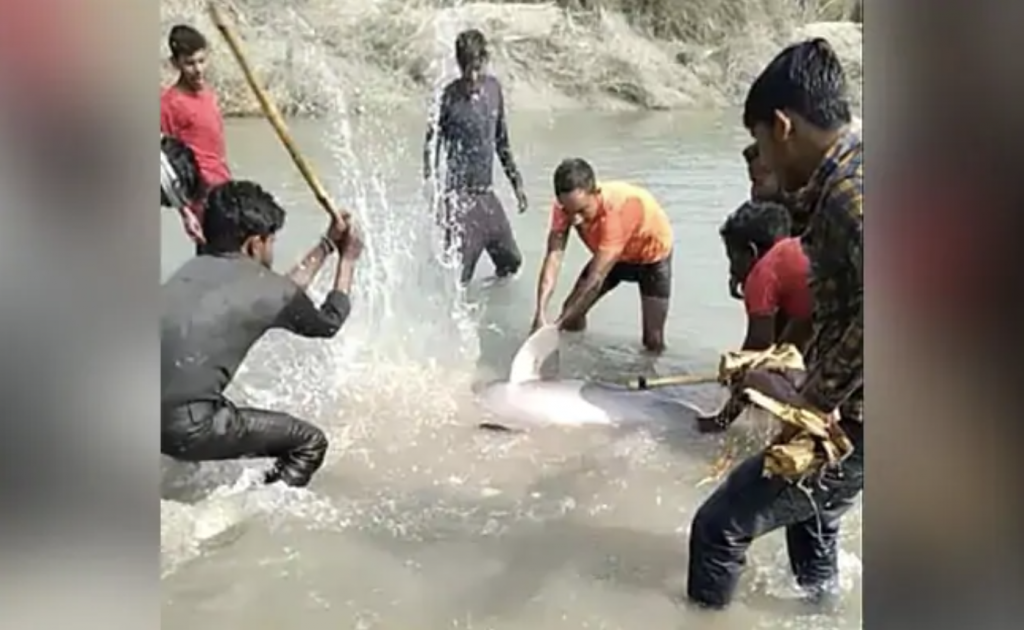 (EnviroNews World News) — Uttar Pradesh, India — A vicious act of animal abuse was caught on camera on December 31, 2020, and posted on social media by onlookers. The video, which has since gone viral, has led to the arrest of some of the attackers with the other still evading the police.

Pratapgarh Police tweeted that three of the men involved in the assault are now in jail. Investigators identified the assailants from the video. One news outlet reports others who participated in the savage beating are on the run.

The footage shows the brutality of the attack. The dolphin tries to escape but the men actually hold the mammal down and continue their assault. As blood spills from the animal’s body, you can hear someone yelling in the background, sounding concerned about the onslaught — but the men continue striking the dolphin. Then one attacker picks up an ax and delivers what may have been the fatal blow. Officials later found the dolphin’s body washed ashore.

People outraged over the barbaric killing posted heated comments and expressed their disgust on the police department’s Twitter post calling for a harsh punishment.

Please do not just arrest them. Make sure to punish them severely! So that other illiterate people’s can get a lesson here. @CMOfficeUP @myogiadityanath

Jail them for life pls

The World Wildlife Fund (WWF) says even with the Ganges river dolphin’s endangered status, the mammal is still on the decline. The organization’s website forecasts a bleak outlook for the species’ future. “Once present in tens of thousands of numbers, the Ganges river dolphin has dwindled abysmally to less than 2000 during the last century owing to direct killing, habitat fragmentation by dams and barrages, and indiscriminate fishing.”

With this species’ low numbers and slow reproductive cycle, it can’t afford a hit like the New Year’s Eve attack. Female Ganges river dolphins only give birth to one calf, every two to three years. The animals live in freshwater and have a longer beak and a rounder forehead than the common bottlenose dolphin (Tursiops truncatus) that live in saltwater.

(EnviroNews World News) – Henan, China – Viewers are furious with the content of a graphic video that has surfaced and is now circulating around the web. The contents: a dog, yelping and crying for its life, as it is boiled alive in front of a crowd of…

(EnviroNews World News) – Beachgoers did something downright idiotic earlier this month in the Argentinian coastal town of Santa Teresita, and many outraged environmentalists, animal rights activists and conservationists are hoping the unruly crowd learned a valuable lesson. “Idiotic” might sound like a strong word for a news…