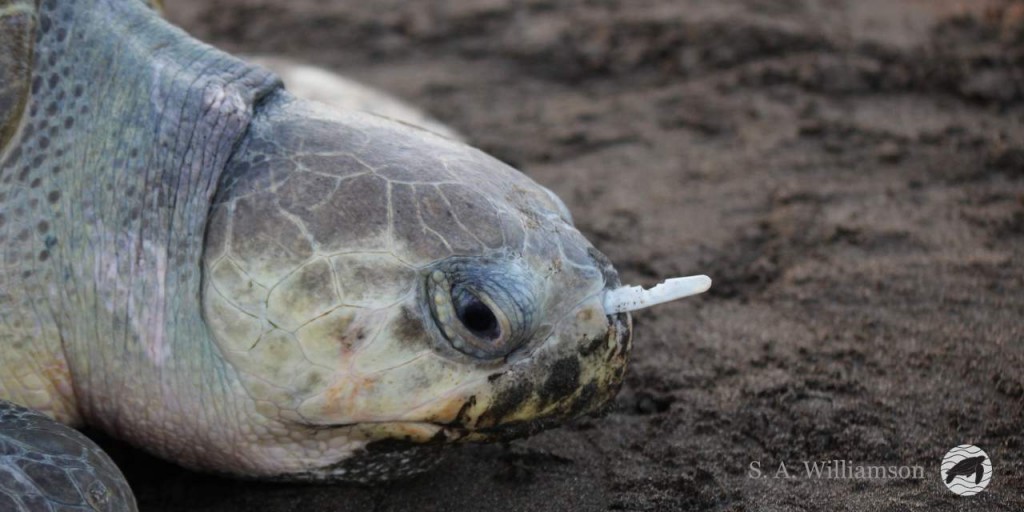 (EnviroNews World News) — First a plastic straw, and now a large plastic fork. These are two of the objects removed from the nostrils of ancient endangered sea turtles this year by researchers.

On December 6, 2015, Nathan J. Robinson, Field Director of The Leatherback Trust, was busy studying barnacle-like creatures that attach themselves to the shells of sea turtles, when distressed tourists came “frantically” to him for help. The problem? A female olive ridley sea turtle was in big trouble with an object protruding from her nose.

Robinson was worried about how badly the animal might be injured, as this wasn’t the first time the researcher has encountered such a situation (more on that in a few paragraphs).

Robinson grabbed his tool kit and quickly made his way to the distressed olive ridley and got to work. Together with team members, the researchers were able to restrain the creature so Robinson could dislodge whatever it was that was stuck in there — and stuck it was. The object was reluctant to come out at first, but after a few good tugs, it finally came free — low and behold, to the surprise of Robinson and bystanders alike, the large end of a plastic fork was revealed.

Just this past summer, Robinson removed a 4.7-inch plastic straw lodged deeply in a sea turtle’s nose in Costa Rican waters. That grueling episode was captured, and the video went viral — making many people think twice about single-use plastic — a substance that millions upon millions obliviously huck and chuck by the wayside on a daily basis. EnviroNews Headline: Watch What One Plastic Straw Does To Endangered Sea Turtle

Fortunately for bystanders and video watchers, the plastic fork episode taped this month wasn’t quite as difficult to watch as the plastic straw episode filmed earlier in the summer. In that video, the turtle was obviously experiencing a substantial amount of pain, and blood gushed out of the poor creature’s nose after the straw was dislodged.

The sea turtle helped this month seemed to be holding up well after the ordeal. Members of The Leatherback Trust watched the turtle for some time, and kept a good eye on her as she made her way back out to sea and swam away. According to the group, everything seemed to be a-okay with the turtle before she disappeared into the ocean.

Sea Turtles are some of the most ancient creatures on earth and can live up to a century in a favorable environment and with a bit of good fortune. But these days, turtles are encountering threats they’ve never seen before in their millions of years on earth. While the olive ridley is the most abundant of sea turtles, it is still considered endangered or vulnerable by most accounts, and numbers suggest the global population has plummeted over 30 percent in just the last 20 years. The creature has been under assault from myriad culprits and causes, and is having an increasingly tough time surviving amidst the many threats.

Dozens of animal species eat the turtle’s eggs and attack and gobble the hatchlings when they make their precarious trip from the nest out to sea. Still, humans are considered to be the olive ridley’s top threat, destroying its nesting habitat and illegally preying on the creature for its eggs, meat and hide.

Humans are also filling the oceans up with plastic at a blistering pace, and sadly that trend has not declined, despite rising awareness of the massive plastic gyres or “garbage patches” now swirling and converging in several key junctures in the world’s oceans. The largest of these gyres is said to be about twice the area-size of Texas, and exists between California and Hawaii. Aptly nicknamed “The Great Pacific Garbage Patch,” this floating mass of plastic continues to expand — year-by-year — decade-by-decade.

As these gyres grow, the plastic floating within also degrades and disintegrates — breaking down into smaller and smaller pieces of micro-plastic from exposure to the elements over time. In some areas, these micro-plastics are found in concentrations up to 50 times higher than zooplankton, meaning fish and other sea life are becoming saturated with the hormone-disrupting, carcinogenic substance. In addition to being a nuance and a deadly hazard to wildlife, all this toxic, endocrine-disrupting plastic, is continually bio-concentrating its way up the food chain — landing eventually at us — human beings that is. The captured videos of Nate Robinson’s sea turtle rescues have certainly put the issue of mindlessly throwing away single-use plastic in people’s faces. Now, the question is: Can humanity catch on, wake up, and get off the plastic locomotive — a train barreling fast down the tracks of destruction — before it’s too late for the world’s oceans, and the incredibly diverse web of living things dwelling therein?

Robinson’s own account of how he helped the imperiled olive ridley can be read just below:

On 6 December 2015, I was at Playa Ostional with the Las Baulas research team. We had taken the trip to Playa Ostional to see the monthly olive ridley turtle mass nesting event, the arribada. Our specific mission was to conduct research on epibionts – the animals, such as barnacles, that make their homes on sea turtles’ shells. While measuring one of the nesting olive ridley turtles, a Costa Rican tourist ran up to us and frantically asked if we could help a sea turtle that appeared to have something stuck in its nose. We quickly grabbed our equipment and ran over to see the turtle for ourselves.

On our way to the turtle, I had a worrying thought. Earlier this summer, I had discovered and removed a plastic straw from a sea turtle’s nose and the thought crossed my mind that this could be a similar event. When I saw the turtle and recognized that it was indeed a plastic utensil, I could only think, “Not again!”.

Seeing that the turtle was heading back to the ocean, I asked two of the biologists, Brett Butler and Collin Hertz, to restrain the turtle. As I tested how firmly the object was lodged in its nose; it was clear that it was lodged into her nose very deeply. I had to make a rapid decision about what to do next. We were many hours drive from the nearest veterinary clinic and had no assurance that appropriate treatment would even be available. I therefore decided to remove the object in situ. Using my Swiss-army knife, which I carry with me whenever I am in the field, I grabbed the end of the object. After a few quick pulls, the object came free from the turtle’s nostril. To my amazement, it was a plastic fork.

With the fork removed, the turtle paused for a moment. Maybe she was getting used to breathing freely again. Shortly afterward, the turtle began to move back to the ocean. Appearing healthy and active, we watched her as she entered the waves and swam away.

Although happy that the fork was free, my first feeling was one of disgust. It is painful to think that the single-use plastic objects that we dispose of so freely can cause so much destruction for marine life. Marine animals commonly ingest plastic debris. This fork, like the straw that I removed from a sea turtle’s nose earlier this summer, was probably eaten by the turtle. When the turtle tried to regurgitate it, the fork did not pass out of her mouth but went out her nose.

As long as we keep using single-use plastic, these instances are going to become increasingly more common. We are all going to have to make an effort to reduce plastic pollution if we don’t want to see more events like this.