0 Deaths: Vietnam Kicked Butt on Tamping down COVID-19 Outbreak, and Vietnam War Techniques Were Part of It - EnviroNews | The Environmental News Specialists
Skip to content 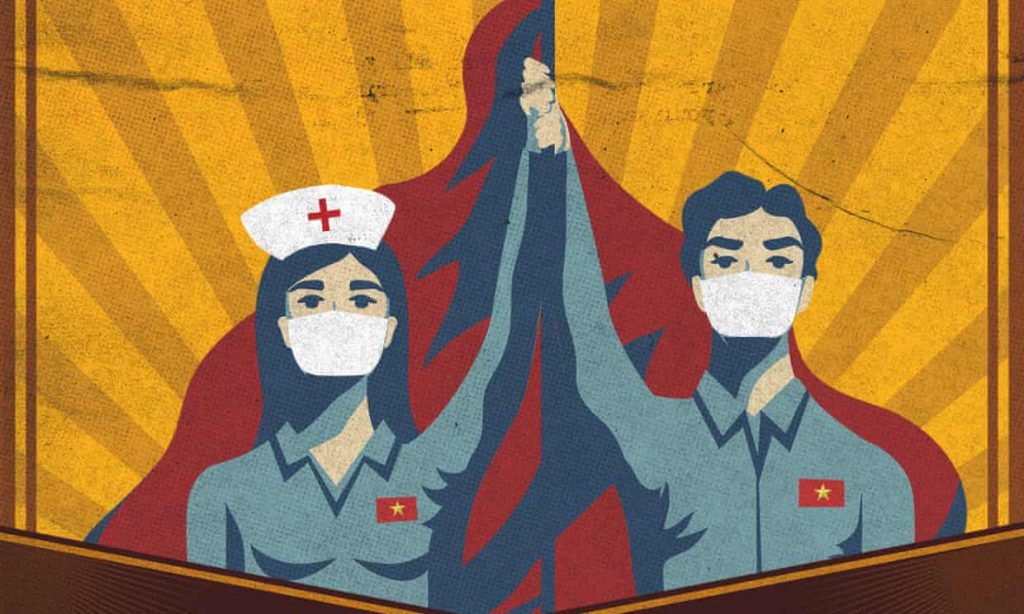 (EnviroNews World News) — Of Vietnam’s approximately 97 million citizens, only 270 have been confirmed positive for coronavirus (COVID-19) and with 225 cases resolved, not one person has died as of Apr. 26. While some may question these numbers, Dr. John MacArthur, the U.S. Centers for Disease Control and Prevention’s Office Director in Thailand, believes they are accurate.

“Our team up in Hanoi is working very, very closely with their Ministry of Health counterparts,” MacArthur told NPR on April 16. “The communications I’ve had with my Vietnam team is that at this point in time, [they] don’t have any indication that those numbers are false.”

So, how did this third world country that shares a border of over 680 miles (1100 km) with China handle the rampantly contagious virus so well? Three factors appear to have been key to the response: information, contact tracing, and quarantine.

Vietnam “declared war” on the virus during the Tết New Year celebrations before the infection ever left China. According to DW, Premier Nguyen Xuan Phuc sprung to action, telling the country’s Communist Party the virus would be coming to Vietnam soon. “Fighting this epidemic, means fighting the enemy,” said Phuc.

The country mobilized on all fronts. However, because of Vietnam’s lack of financial resources, it couldn’t rely on government funding alone — nor could the people count on their poorly equipped healthcare system. Ho Chi Minh City only has 900 ICU beds to serve 8 million people. Vietnam had to work smarter and faster.

The Vietnamese are proud of their ability to stand together in a crisis. This sense of national unity was crucial to implementing what is arguably the most effective COVID-19 combat program in the world.

“Every business, every citizen, every residential area must be a fortress to prevent the epidemic,” Phuc said. He backed his rhetoric up with a propaganda campaign including a song for washing hands from the Health Ministry that went viral. To keep everyone on message, fines are being levied against those who post fake news about the pandemic on their social media accounts.

Artists joined the cause, creating messages to help citizens understand and believe the battle was serious. One poster, as seen in The Guardian, shows two medical people standing with their hands raised baring the slogan: “To stay at home is to love your country.” Le Duc Hiep, the artist, said he created the poster after he saw people on social media still gathering in groups and going out to cafés.

“I wanted to make something that [could] go viral, raise awareness and inspire people to do the right thing. I chose the propaganda style because it’s familiar to Vietnamese people and this style always invokes patriotic emotions,” Hiep told The Guardian. Vietnam used the same style of art during the Vietnamese war. 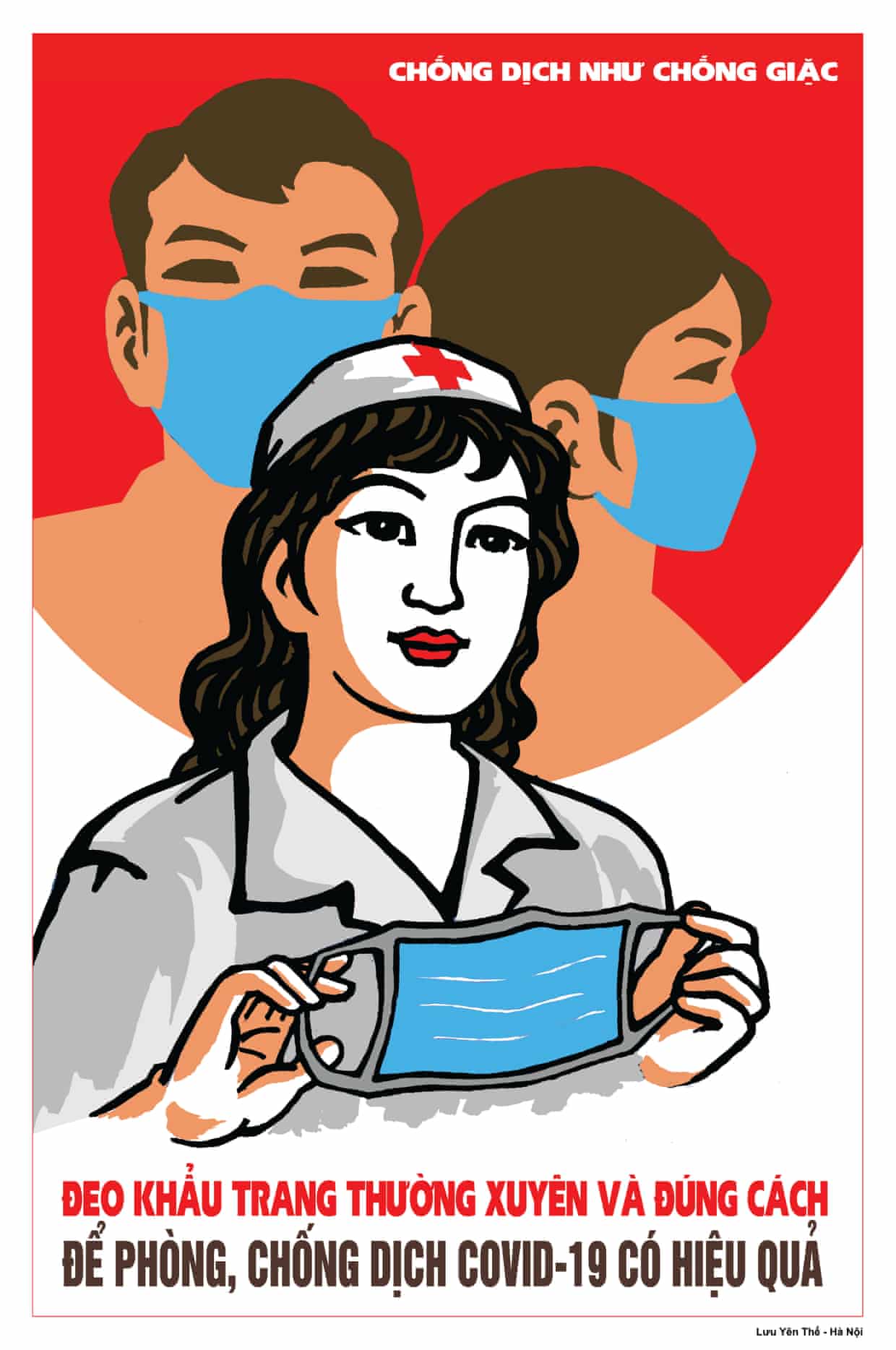 Phan Trung Ha worked with the government to develop stamps depicting the fight against coronavirus. One of his designs features two researchers with a clenched fist behind them; another shows people in different social situations wearing facemasks, taking temperatures, and wearing protective gear. 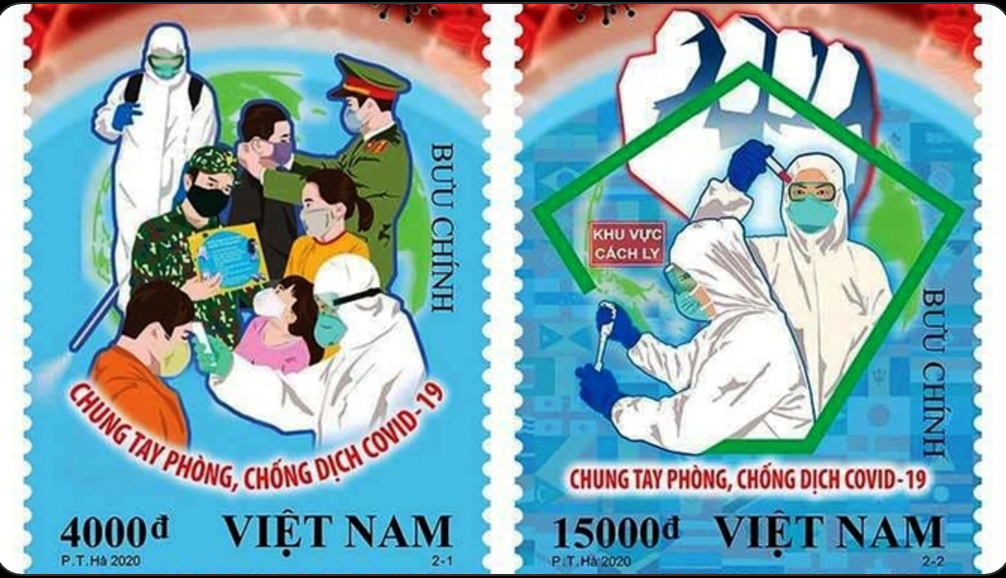 Vietnam implemented quarantines of entire cities much more quickly than China. On Feb. 12, the country ordered a lockdown in a city near Hanoi with a population of 10,000. This was at a time when there were only 10 cases of COVID-19 in the country. It shut down the entire school system in February as well. The nation went into total lockdown on April 1. 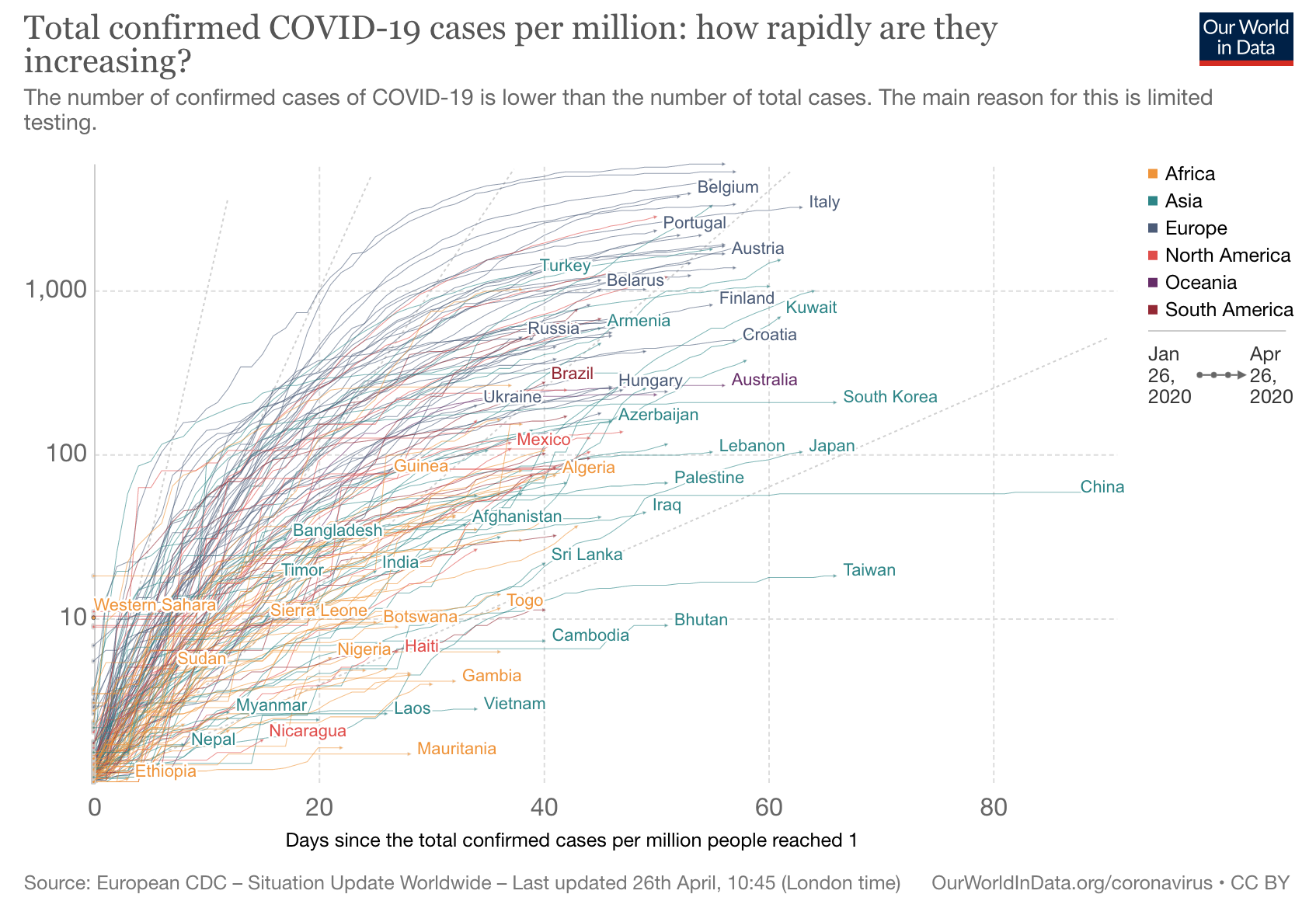 The Vietnamese government also tracked down anyone who came into contact with an infected person. While most countries only looked for those who came into direct contact with someone who was ill, Vietnam tracked and tested individuals up to four times removed from the initial patient. Anyone who had possibly contacted a patient at any of the four levels of removal was put into quarantine.

The country also deployed its military and its Communist Party spies to ensure people could not evade regulations. Social pressure also came down on those who violated the rules and quarantine procedures. One woman returning from Europe, who brought the virus back to the country after the first 16 cases had been resolved, was ostracized and jeered on social media.

Despite the relative success, the Vietnamese economy is sure to take a hit, even with the government pouring in around $1.1 billion worth of aid for businesses and residents. However, with the number of Vietnamese donating to the cause, it seems that people accept the coming economic problems and the results of the hard stance from a country that didn’t have the money or infrastructure to deal with a full-blown pandemic. According to the Diplomat, by mobilizing feelings of nationalism, Vietnam has escaped the fate of many other countries with more resources and hasn’t had a single death related to COVID-19 as of April 26.