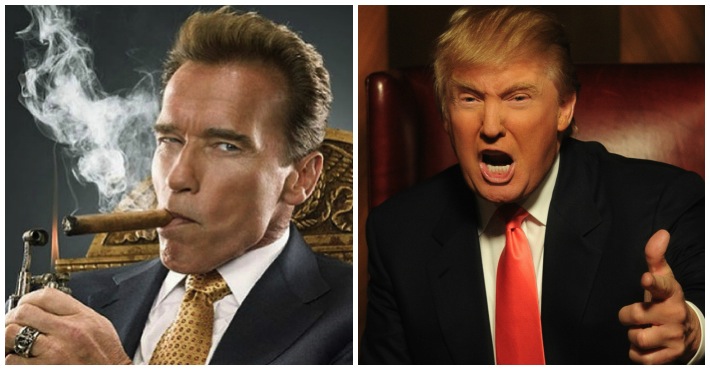 (EnviroNews USA Headline News Desk) — Washington D.C. — On February 2, 2017, in what has been called a “tacky,” “tasteless,” “un-presidential” display, President Donald Trump used the traditional solace of the annual National Prayer Breakfast in Washington to fire a cheap jab at Arnold Schwarzenneger, cutting at the former Republican Governor of California, for having lower TV ratings than his, after Schwarzenneger took over as host on Trump’s show The Apprentice.

“They hired a big, big movie star, Arnold Schwarzenegger, to take my place, and we know how that turned out,” snarked the President. “The ratings went right down the tubes, it’s been a total disaster, and Mark [Burnett] will never, ever bet against Trump again. And I want to just pray for Arnold, if we can, for those ratings.”

WASHINGTON, D.C. — President Trump, at National Prayer Breakfast, talks about “The Apprentice” ratings and the time he fired his agent. pic.twitter.com/z93rGYvqqd

But Schwarzenegger, a.k.a. “The Goveranator,” countered with a right hook that blackened “The Donald’s” eye, slapping the President down with a good old fashion burn, for what seems to be a widespread feeling of instability in the country — palpable on the ground — and at the Capitol.

Like a calm and collected father putting a smart aleck child in his place, Schwarzenegger rebuffed in a Tweet, “Hey Donald, I have a great idea — why don’t we switch jobs? You take over TV, because you’re such an expert in ratings, and I take over your job. And then people can finally sleep comfortably again,” Schwarzenegger said with a grin.

Of course there’s always the chance the two Hollywood Republican stars are just in on it together right?: a grand, behind-the-scenes, carefully-crafted publicity stunt, in an effort to bolster the show’s ratings. Who knows? Is that a conspiracy theory? Guess we’ll all have to wait and see if the Twitter war-of-words continues, and if the show’s ratings go up.