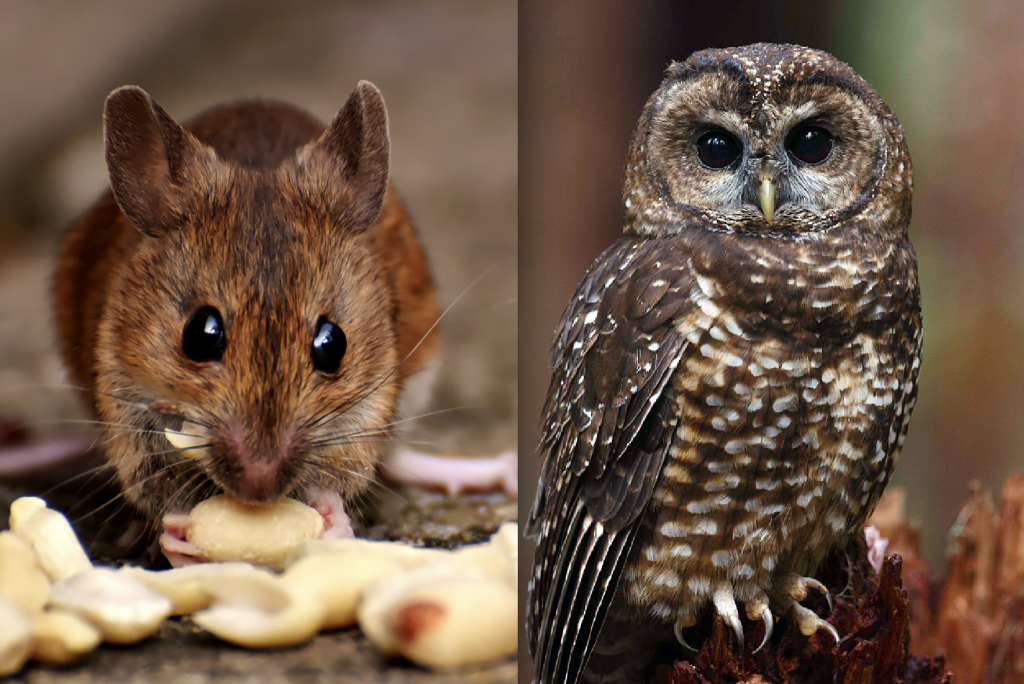 (EnviroNews Nature) — The iconic northern spotted owl (Strix occidentalis caurina) is back in the news again as population numbers continue to decline throughout its range — from British Columbia to Northern California. The primary culprit in the story of this bird’s precipitous decline has always been recognized as habitat loss, but now, another lethal villain has been exposed: rat poison.

WildEarth Guardians (Guardians) is a non-profit organization legendary for successfully suing the federal government for failing to protect endangered animals. Guardians nominated the northern spotted owl for the report, saying in a press release, “These poisons are harmful to predators and scavengers, such as the northern spotted owl, as they contaminate the food web and cause the secondary poisoning of wildlife [that] consumes a dosed rodent.”

By “these poisons” Guardians is referring to a class of common pesticides known as second-generation anticoagulant rodenticides, or “SGARs” for short.  “These super toxic poisons can kill with just a single feeding and, most alarmingly, they can persist in a rodent’s system for over a year,” Guardians continued in its press release. “Rodenticides are also found in non-target animals such as barred owls, bobcats, mountain lions, and San Joaquin kit foxes — another endangered species.”

Difenacoum, brodifacoum, bromadiolone and difethialone are common compounds found in SGARs.  According to SafeRodentControl.org, “brodifacoum and difethialone pose the greatest potential risks to avian predators and scavengers that feed on target or non-target animals poisoned with bait.”

The primary difference in first-generation and second-generation anticoagulant rodenticides is their potency and toxicity.  Three substances are approved by the U.S. Environmental Protection Agency (EPA) in the first-generation category and include: chlorophacinone, diphacinone, and warfarin (the same Warfarin used as an anti-clotting drug for coronary artery patients). But the main difference in these two generations of poisons is that the first generation is excreted relatively quickly by the organism and typically takes multiple feedings to accomplish the desired result: death of course. However, this is not the case for the second generation substances where death often occurs with just one feeding. And when death doesn’t occur, the toxin is not readily excreted and can persist in the animal’s system for months.

In an in-depth email interview with EnviroNews Nature, Lindsay Larris, Wildlife Program Director with Guardians, said, “Testing for these poisons in dead wildlife is an expensive and timely process so, unfortunately, many people simply do not know the scope of the problem… For example, in Southern California, two dead mountain lions were just confirmed to have multiple rodenticides in their systems.”

California is ahead of other states and has done more research when it comes to the inadvertent poisoning of wildlife from rodenticides.  More data is starting to come in from other states though with many of the same dismal results.  A report from September of 2019 by the U.S. Geological Survey (USGS) titled, Anticoagulant Rodenticides in Northwest Forest Owls, shows contamination from SGARs throughout the “food web.”

In USGS’ report, the agency used “ecologically similar barred owls (Strix varia) as a surrogate species for the northern spotted owl, as the two species compete for space, habitat, and small mammal prey.” In Oregon and Washington, the barred owl has been part of an experimental removal program wherein the birds are shot and killed, in an effort to help dwindling northern spotted owl populations. This has created a “unique opportunity” for researchers to study tissue samples from barred owls “occupying a variety of forest types” — and the results aren’t looking good. Regarding this study, the USGS wrote on its website:

Researchers found high exposure rates [to SGARs], 38–64 percent, in free-ranging barred owls collected in older Oregon and Washington forests, often within close proximity to spotted owls. Both species were likely being exposed to SGARs via secondary exposure from contaminated prey. Findings represent the first confirmed cases of rodenticide exposure in Strix owls in Washington and Oregon. Brodifacoum, an extremely toxic second-generation AR, was the most common rodenticide — detected in 89 percent of positive cases.

An Associated Press (AP) article from January of 2019 titled, Northern Spotted Owl Numbers Rapidly Decreasing Despite Efforts, Scientists Say, points out that according to the U.S. Fish and Wildlife Service (USFWS), declines in northern spotted owl numbers have increased to 3.8 percent annually — up from the 2.8 percent annual drops reported only five years ago.  The article points repeatedly to the barred owl, which it refers to as an “aggressive invader from the East,” while making no mention at all of rodenticides, demonstrating the lack of awareness and available data surrounding the problem.

“SGARs are products registered with the EPA and used by a variety of pest control operators under various brand names,” Larris continued to EnviroNews.  “The key is that it’s not a particular method of application or one brand over another that is causing a problem — it is the chemical itself that is so toxic and dangerous that it simply cannot be applied in a manner to minimize the risk of contaminating the food chain.”

So why isn’t more being done to stop these dangerous chemicals from entering the food chain one might wonder? According to Larris, it’s because the environmental damage is ahead of the research, demonstrating yet another instance where the EPA has allowed the deployment of dangerous money-making chemicals without first doing its due dilligence.

“There has not been greater regulation on [the] use of these anticoagulant rodenticides because of limited data collection; these products have never been banned by the EPA and the scope of the problem is just beginning to be understood,” Larris said. “Additionally, there is messaging by pest control operators that use of these products is essential for controlling rodent populations and thus preventing harm to human health.”

There may be some hope on the horizon for animals poisoned by pesticides though.  A recent lawsuit filed against the EPA by Pesticide Action Network North America (PANNA) and the Center for Biological Diversity, one of the nominating organization listed above, has environmentalists and ecologists feeling hopeful.  That suit demands the EPA to conduct risk assessments on eight toxic pesticides, including four rodenticides: brodifacoum, bromadiolone, warfarin and zinc phosphide. The Center for Biological Diversity, like Guardians, boasts a success rate of around 90 percent when fighting the federal government in wildlife-related lawsuits.

Leaving no stone unturned, Larris has also been pushing legislation in the state of California that would put a ban on SGARs in most situations, while also continuing to pressure the EPA for regulation. “If California can be the first state to severely regulate SGARs — only allowing their use in extreme situations when other options have been exhausted — we believe that other states will follow suit,” Larris concluded.

The other nine animals rounding out ESC’s list of animals imperiled by pesticides are as follows: