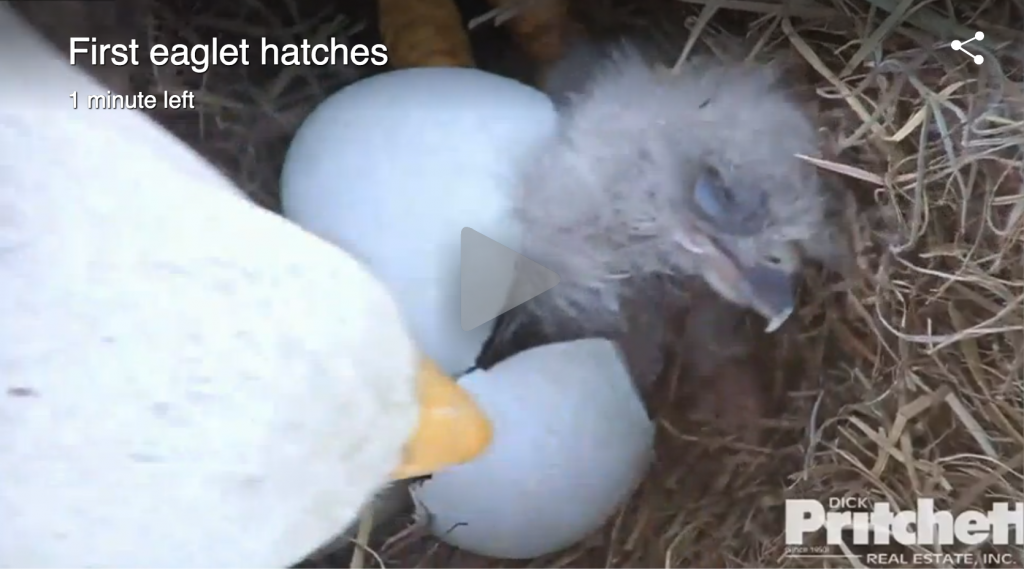 (EnviroNews USA Headline News Desk) — Fort Myers, Florida — Harriet the bald eagle (Haliaeetus leucocephalus) and her mate M15 (short for Male 2015) are now the proud parents of one healthy chick and are awaiting the emergence of another in their nest near Fort Myers, Florida. The hatching happened on New Year’s Eve 2016 and went smoothly, as tens of thousands of people around the world tuned in to live-stream the event.

The birth was broadcast via the Southwest Florida Eagle Camera (SWFEC), a.k.a. the “Eagle Cam,” which was brought online in October of 2012 by Dick Pritchett Real Estate. The company continues to maintain three cameras at the site, including one with infrared/night-vision capabilities.

Bald eagles, like many other birds of prey, mate for life — but the marriage to M15 is not Harriet’s first. As a matter of fact, when the Eagle Cam was first launched, Harriet had another husband: Ozzie. The pair successfully hatched and fledged several chicks to maturity for all the world to see before Ozzie was injured in a fight with another eagle in September of 2015. Just two days later Ozzie died. But it didn’t take Harriet long to select another suitable mate. After a few weeks of courting, Harriet chose M15, and by December 2015, the pair had their first two eggs incubating.

However, Harriet’s journey hasn’t been an easy one. As Mother Nature would have it, the eagle mama, in addition to losing her first mate, lost several chicks along the way as well. Dick Pritchett provides a timetable of births, deaths and other major nesting events on its website, where viewers can read about Harriet’s history as an on-camera wildlife superstar. The real estate firm asserts its cameras don’t bother the birds at all, and has this to say on its website:

The 2016-2017 season is the fifth season Dick Pritchett Real Estate has provided the live look into this Southwest Florida nest. This season we will again catch all the action using three cameras that film the birds 24/7 and stream live video directly to this site.

Camera #1 is positioned six feet above the nesting tree and is equipped with night vision or infrared light, which emits no actual light. Nor does it make any noise. The birds do not see or hear anything coming from the camera. Camera #2 is located approximately 60 feet from the nest and has the ability to capture images of the nest action outside the view of Camera #1. (See diagram right for picture of cam locations) Both cameras are environmentally friendly, non-intrusive and positioned to offer the best view of the nest and birds while preserving the pristine beauty of the nest and their surroundings.

A third camera (Cam #3) is installed closer to the north of the pond, to capture activity happening around the pasture and in the pond area.

Now, wildlife lovers across the globe are tuning into the Eagle Cam, eagerly awaiting the hopeful emergence of the second chick — still under incubation in the nest. You may tune in and watch the nest live on the SWFEC in the video player just below.