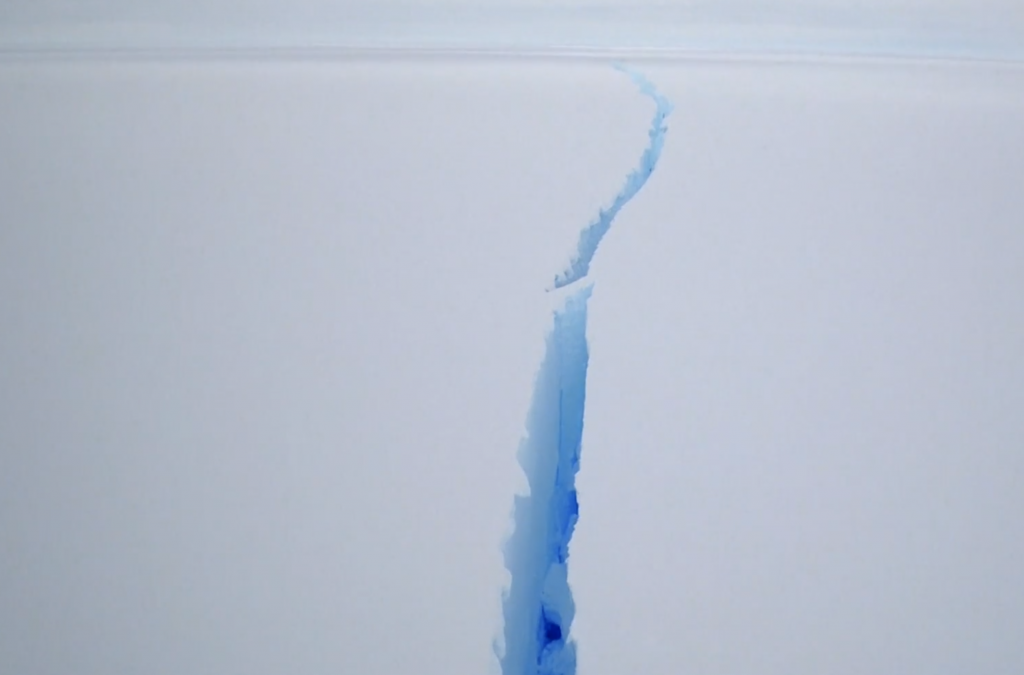 (EnviroNews World News) — Calved from the Brunt Ice Shelf in Antarctica, an iceberg the size of New York City, about 490 square miles (1270 square km), has detached and fallen into the ocean. On Feb. 26, 2021, the North Rift, a crack that became active in November 2020, widened several hundred yards and released the iceberg from the floating ice shelf. The calving was reported by scientists from the British Antarctic Survey’s (BAS) Halley Research Station, which is now closed for the Antarctic winter; they say their workplace is unlikely to be affected by the event.

In November 2020, the North Rift headed toward a large chasm near the Stancomb-Wills Glacier Tongue, 21 miles (35 km) away, indicating that a calving event was imminent. That event signified the third major crack to open during the last decade. In January, the crack cut through the 490-foot-thick (150 m) ice shelf as quickly as .6 miles (1 km) a day. Other fissures that contributed to the event were detected in the ice shelf about 10 years ago. Professor Dame Jane Francis, Director of BAS, wrote this in the report:

Our teams at BAS have been prepared for the calving of an iceberg from Brunt Ice Shelf for years. We monitor the ice shelf daily using an automated network of high-precision GPS instruments that surround the station, these measure how the ice shelf is deforming and moving. We also use satellite images from ESA, NASA and the German satellite TerraSAR-X… So we know what’s happening even in the Antarctic winter, when there are no staff on the station, it’s pitch black, and the temperature falls below minus 50 degrees C (or -58F).

There is still a question of where the iceberg will end up. Scientists say it could run aground and remain close to the Brunt Ice Shelf, or it could drift out to sea.

Because of the unpredictability of the consequences of calving events, the Halley Research Station was moved 19 miles (32 km) in 2016 to avoid the paths of “Chasm 1” and “Halloween Crack.” In 2017, BAS decided to occupy the research facility only during the summer because of the difficulty posed by an emergency winter evacuation.

“This is a dynamic situation. Four years ago, we moved Halley Research Station inland to ensure that it would not be carried away when an iceberg eventually formed.  That was a wise decision,” said Simon Garrod, Director of Operations at BAS. “Our job now is to keep a close eye on the situation and assess any potential impact of the present calving on the remaining ice shelf.”

The scientists at BAS said there is no evidence that this event is related to climate change. It appears to be a natural part of the ice changes.

This is the sixth incarnation of the Halley Research Station, which has been in operation since 1956. The facility was integral in finding the hole in the ozone layer in 1986, and it continues to monitor the hole’s recovery.

On Christmas Eve 2019, the record for Antarctic ice-melt was recorded at about 15 percent, prompting scientists to claim a climate emergency.