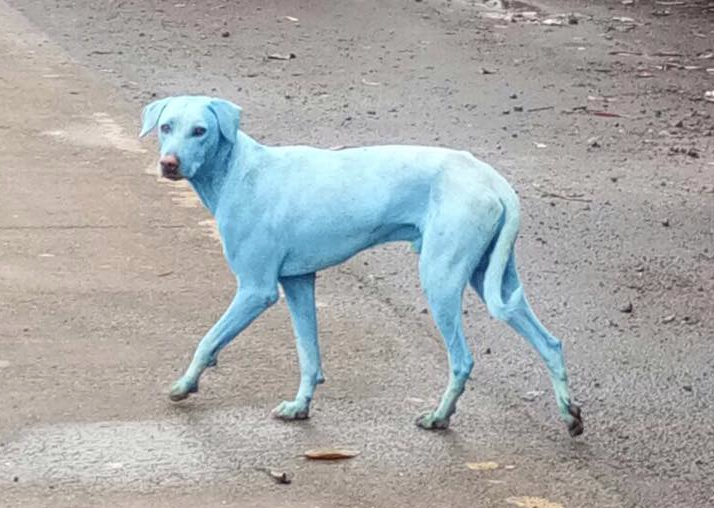 (EnviroNews World News) — Taloja, Mumbai, India — On August 11, 2017, dogs with bright blue fur were spotted roaming the Taloja neighborhood in Mumbai, India. Concerned locals reported the unusual situation to the Maharashtra Pollution Control Board (MPCB), which determined industrial waste and dyes were being dumped into the Kasadi River where the dogs swim.

“It was shocking to see how the dog’s white fur had turned completely blue. We have [spotted] five such dogs here and have asked the pollution control board to act against such industries,” said Arati Chauhan, head of the Navi Mumbai Animal Protection Cell, according to The Guardian.

On August 18, MPCB issued a closure notice to Ducol Organics Pvt Ltd., after discovering that no required pollution abatement measures were being followed at the plant. Ducol Organics manufacturers various paints, plastics, pigments, detergents and other products.

“Ducol Organics Pvt Ltd. is harming animals and birds in the area. We cannot let such an industry function. We will ensure that the plant does not function from Monday and the decision sets an example for other polluting industries, which may not be following pollution abatement measures,” MPCB Regional Officer Anil Mohekar told the Hindustan Times.

There are 977 factories in the Taloja industrial area where the Kasadi River flows, The Guardian reports. Chauhan characterized the decision to close a single factory as insufficient to address local pollution issues and said it would harm the daily wage laborers who rely on the company for work. “There is a need for pollution monitoring of all plants and development of adequate green cover around industrial sites,” she said.

Many dogs in India fall under a “community owned” status. They are also often companions to people who are homeless or living in slums, who make up more than half of Mumbai’s population, Sarah Gibbens of National Geographic explains.

Mumbai’s Thane Society for the Prevention of Cruelty to Animals (SPCA) was able to clean one of the dog’s fur and test its skin for toxicity. The dogs have not experienced any adverse health effects from the pollution that can be detected at this time. A temporary gate has now been constructed by the company to prevent more canines from entering the river.