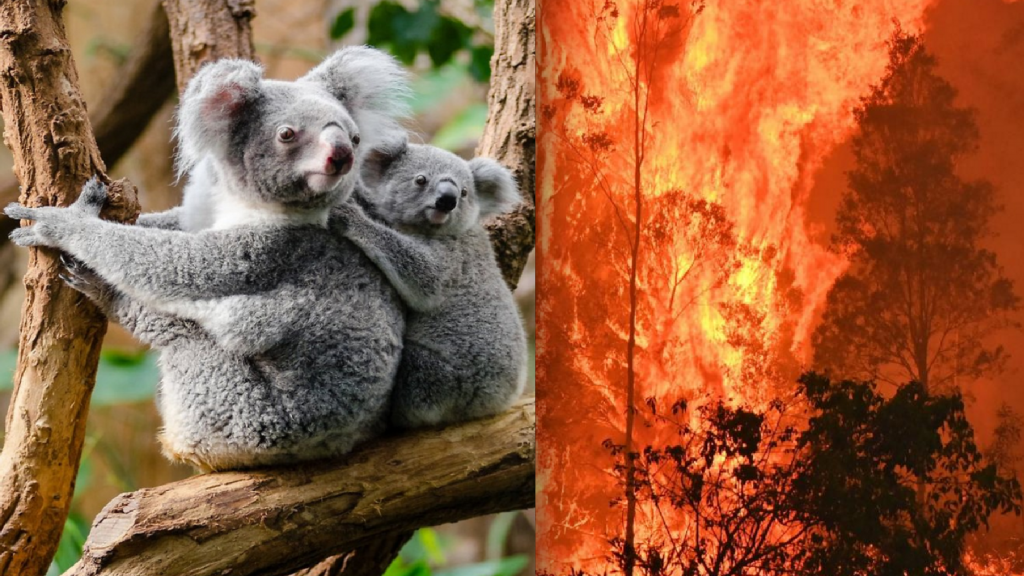 (EnviroNews World News) — As bush fires rip through the Mid-North Coast region of Australia’s New South Wales (NSW), koalas (Phascolarctos cinereus) are being incinerated at an alarming rate. High winds and temperatures have hampered firefighting efforts. Australian Federal Environment Minister Sussan Ley fears 30 percent of the area’s koalas are now dead because 30 percent of their habitat has been destroyed. New South Wales is home to 28,000 of Australia’s 80,000 koalas.

“We’ll know more when the fires are calmed down and a proper assessment can be made,” Ley told the Australian Broadcast Corporation. “In the meantime, I’ve convened experts, scientists, people who understand koala behavior, [and] our amazing wildlife volunteers to work out how we build those corridors of habitat and how best we reintroduce koalas from the [koala] hospitals.” The government has allocated $6 million AUD (about $4.2 million USD) to the effort.

The Port Macquarie Koala Hospital has been inundated with burn patients. The organization has four paid staff and over 140 volunteers. In response to the fire, the hospital started a GoFundMe page asking for $25,000; thus far, the hospital has raised over $2.3 million AUD so far, making the campaign nearly 10,000% funded.

The adorable and beloved fuzzy creatures, also incorrectly known as “koala bears,” definitely know they are in trouble too. Social media is filled with heartbreaking photos and videos of the animals approaching people for water and help. Cyclist Anna Heusler posted to Instagram about her experience:

This koala walked right up to me as I was descending and climbed up onto my bike while I gave him water. Best thing to happen to me on a ride ever.

New South Wales has had several fires raging since the beginning of November. On Nov. 20, 2019, Toni Doherty literally gave the shirt off her back to save a koala from a wildfire. According to People, Doherty grabbed the koala after spotting it from her car.

“He just went straight into the flames, and I just jumped out of the car and went straight to him,” Doherty told Australia’s Nine News. She named the koala “Lewis” after one of her grandchildren.

She gave the koala water and washed it down to cool its burns. Unfortunately, Lewis the Koala died on Nov. 26 from its injuries.

Fire kills koalas indirectly as well. According to Deutsche Welle, North East Forest Alliance President and ecologist Dailan Pugh, told a government inquiry that fires in South Australia and on the eastern side of the country have killed at least 2,000 koalas. Those animals died in the fire or from dehydration and starvation in the aftermath.

Recovery for the surviving koalas presents another challenge. Koalas are more sensitive to loss of habitat than most other animals.

“You can’t pick up a koala that’s lived for several generations in one area and move it even 50km away,” Ley told Sydney Radio 2GB Broadcaster John Stanley. “It needs the same area, the same type of trees, and it really is quite a complicated exercise. They’re not the easiest creatures to adapt to different circumstances.”

The wildfires have scorched an astonishing 12.35 million acres and over 1,000 homes according to CNN. Entire towns have burned to the ground, and fire fighters have been hospitalized. Nine people have died. In comparison, California’s massive Mendocino Complex Fire, the largest in the state’s history, burned 459,123 acres — about four percent as much area as these behemoth Australian fires have consumed.

Dramatic images surfaced this week of thousands of people and animals running onto beaches in a frantic effort to save their own lives, under what was described as a “blood-red” sky. In a scene called “apocalyptic” by fearful evacuees, there they awaited rescue as terrifying images surfaced online showing a sky appearing as bright red as the flames chasing them to the sea. The military and other agencies are still trying to get trapped victims off beaches by helicopter and naval ship.

My fam n I just ran for our lives through bush. Huge bushfire trapping the 5 of us in the holiday house we’re staying at. We don’t know what’s left but so grateful for the @NSWRFS 🙏 heading home to Sydney in shock. #tarbuckbay #NSWfires The #RFS are heroes!! pic.twitter.com/0ZudpxY7Ak

Of course, koalas aren’t the only animals affected by these brutal fires. The western ground parrot (Pezoporus flaviventris) and the Kangaroo Island dunnart (Sminthopsis aitkeni), a marsupial threatened by feral cats, are also being hampered and destroyed.

“It doesn’t need to be fluffy and cute; it can be scaly and scratchy and it’s just as important to me as environment minister but also to the Australian environment,” said Ley.

New South Wales has faced a severe drought since mid-2017 according to its Department of Primary Industries. While scientists are reluctant to pin drought on one particular factor, many experts point to climate change as the primary cause of the drought and ensuing fire. Australia is heavily reliant on coal-fired power and was one of only a handful of countries at COP25 that blocked any meaningful climate agreement.

(EnviroNews World News) – Madrid, Spain – The United Nations (UN) Climate Change Conference of the Parties (COP25) failed to reach any significant agreements in Madrid despite an additional two days being added to the meeting. Held from Dec. 2 through 13, the meeting brought together 195 countries to discuss…